New and mounting evidence that overdose prevention sites bring broad health benefits to individuals and positively impact their communities has one advocate asking why British Columbia isn’t working harder to open more of them.

Ann Livingston has been an activist for drug user rights for 30 years. She supports a number of overdose prevention sites where people can use substances and connect to health and social services in the Lower Mainland.

But despite the need for the sites in every community in B.C., few outside Vancouver get off the ground due to municipal and neighbourhood opposition that ignores the evidence of their benefits.

“People are trying to save each other’s lives,” said Livingston in an interview. “And then nothing happens because they can’t find anywhere to lease.”

Overdose prevention sites are a form of harm reduction where people who use substances can go for clean supplies and to use drugs under supervision from trained peers who also have lived experience with substance use.

People can get clean supplies to prepare and take their drugs, socialize and be monitored after using in case they overdose. About 89 per cent of people who die from toxic drugs had been using alone, according to data from the BC Coroners Service.

“Isolation is what kills drug users,” said Livingston. “OPSs should be run very locally. What you want is people, even if it’s cold out, they should take the time to go over there and take their drugs there.”

After B.C. declared a public health emergency over the overdose crisis, the province issued an order to rapidly expand OPS services, which are more casual and can be established quickly. Because they are not an explicitly medical service like the Insite supervised consumption site, they are also not under federal regulation.

Between January 2018 and July 2021, there were more than 2.5 million visits to overdose prevention sites in B.C., with 14,000 overdoses attended and zero deaths. There are now 35 sites across B.C., 10 of which are in Vancouver.

And their benefits are wide-ranging and distinct from the more medical and regulated supervised consumption sites, a study by researchers at the BC Centre on Substance Use and the University of British Columbia found.

After the expansion of OPS sites in December 2016, the proportion of substance users who accessed supervised consumption sites climbed from 41 to 47 per cent.

Seventy per cent of substance users accessed treatment and recovery services, up from 65 per cent before the sites opened, and the proportion who reported injecting in public fell from 36 to 30 per cent.

The OPS expansion also halved the number of people who reported sharing syringes, a key reason for the spread of HIV-AIDS and other blood-borne illnesses, from five per cent to two per cent.

“What we’ve seen with OPS, these services can really be more responsive to people who use drugs because they minimize barriers to access,” said Dr. Mary Clare Kennedy, lead author of the study.

Many face stigma from medical professionals and are less likely to want to access other health services. Some also want to share drugs or use alongside friends, which supervised consumption sites don’t allow.

“Having services operated by and for people who use drugs is shown to increase access. People feel safer,” said Kennedy in an interview.

The findings build on decades of evidence that supervised consumption and overdose prevention sites are beneficial to both users and communities, Kennedy said, because the injection of drugs in public decreases an individual’s risk of overdose as well as perceived “social disorder.”

But the health benefits need to be at the centre of every new push for more overdose prevention sites, because local residents’ concerns about their impacts are often not based on evidence.

“With harm reduction services, we’re often asking what the benefit is for the broader community,” Kennedy said, “and we wouldn’t ask that of any other health services.”

Since August 2020, the province has opened seven new overdose prevention sites in B.C., and nine more are being planned, including five in the Fraser Health region, a Ministry of Mental Health and Addictions spokesperson wrote.

Budget 2021 sets aside $45 million over the next three years to support OPSs across B.C., she added.

The Ministry declined to comment directly on Livingston's calls to be more proactive, and said "Health authorities continue to work closely with communities and partners to situate these sites where they will have the biggest impact."

"The recent report published by the BC Centre on Substance Use is positive and confirms that overdose prevention services are vital health services that benefit people and their communities," the statement read. 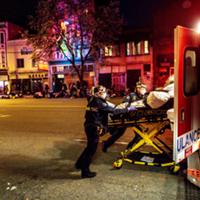 BC Is on Track for Deadliest Toxic Drug Year

But Livingston wants to see the province take a more proactive approach to ensure municipal bylaws and hesitant landlords don’t prevent these sites from saving lives.

The lease for an OPS in Nanaimo was terminated in November, Livingston said, and Chilliwack passed a bylaw earlier this year to require approval from neighbours and city council before an OPS can open.

When the evidence to support the sites is this clear and lives are at stake, governments should be working overtime to remove any barriers that prevent them from opening, she added.

“Everyone needs places to use drugs,” said Livingston. “And when a facility exists for people to use drugs safely, it sends a very powerful message to people who have nothing but hatred.”