British Columbia was in the middle of updating its provincial flood strategy when record-breaking amounts of rainfall flooded parts of the province.

That should act as a “wake-up call” for B.C. to ensure its new strategy creates a co-ordinated flood response between communities and integrates more nature-based flood infrastructure that could, during extreme weather, allow calculated areas of the province to flood, says Kees Lokman, director of UBC’s Coastal Adaptation Lab.

Lokman says B.C.’s municipalities are doing the best they can to adapt to more dangerous flood seasons, but the province needs a holistic plan to help them co-ordinate climate change adaptation to protect themselves from future floods.

“You’re talking about traditional territories, fishing grounds, so many other factors that need to be brought into the planning, so we don’t effectively do things that aren’t going to be accepted by the First Nations communities,” Schnitzler says.

He says over 40 First Nations communities were impacted by the recent floods. The exact amount of damage is still being assessed and varies by community, but in many places water covered roads and blocked people’s abilities to leave, he says. “Roads just disappeared.”

To guide its flood response, the province is currently following policy laid out in its B.C. Emergency Management System and the Provincial Flood Emergency Plan, according to the Ministry of Forests, Lands, Natural Resource Operations and Rural Development. The ministry is in charge of flood response in B.C.

But these plans are almost six and three-years-old respectively.

The ministry says it’s also exploring “opportunities to advance disaster risk reduction and climate adaptation” through its Climate Preparedness and Adaptation Strategy, as well as a new B.C. flood strategy and the modernization of the Emergency Program Act.

The new flood strategy would update the B.C.’s flood response and “articulate a provincial vision, outcomes, principles and priorities for flood resilience in the 21st century,” the ministry said. It should be ready by mid-2022, it added.

In its Climate Preparedness and Adaptation Strategy draft, released this spring, the province said the new flood strategy will enhance community climate resilience, “modernize emergency management legislation,” and be created in collaboration with other levels of government.

It also “could include” establishing a “floodplain mapping program that will inform and modernize flood management in a changing climate.”

The maps are “critical decision-making tools in flood mitigation, land use planning and emergency planning,” he says. “They also help with public awareness — a lot of people don’t even know they’re living in a floodplain.”

After that, there are two main things Lokman hopes to see in the new flood strategy.

“It’s clear that we can’t keep the dikes where they are. We’re going to get many more of these floods,” he says. “We have to work together to try and understand temporary flood storage and setback dikes. In areas with lots of assets, we need to think about moving those assets to higher grounds or areas that are less likely to be flooded.”

Without co-ordination, one municipality building flood mitigation infrastructure like a dike could mean neighbouring communities are hit harder when the river swells.

There are also international examples, like Washington state’s Floodplains by Design and the Netherlands’ Room for the River Programme.

“We really need to have a collaboration and have all parties — all levels of government, First Nations, First Nations’ Emergency Services Society and other partners that are dealing with disasters — to have a more integrated response model so they’re all working together,” he says. “That’s critical moving forward.”

Next, Lokman says all levels of government need to review regulations and check if they help or hinder communities to adapt to climate change.

Nature-based solutions are better for the environment and offer humans more co-benefits, like maintaining ocean views, he adds. But current regulations from Fisheries and Oceans Canada or the Dike Maintenance Act “make it very difficult for municipalities to implement these solutions,” Lokman says.

There are two pilot projects underway that use nature-based solutions to prevent coastal flooding.

One is located on the shoreline of the cities of Delta and Surrey and is known as the Living Dike. The project aims to help coastal ecosystems build up at the same rate as sea level rise, therefore preventing what’s known as coastal squeeze, when intertidal habitat gets drowned under rising seas when hard infrastructure, like dikes and seawalls, prevent it from moving further inland.

The other is known as the Sturgeon Bank Marsh Recession Project, which works to use dredged sediment from the Fraser River to reverse the erosion of Sturgeon Bank just off Richmond, Lokman says.

Pilot projects like these can be expensive, time consuming and face a lot of red tape, Lokman says — but if they are successful it will make it easier for municipalities to implement nature-based solutions to flooding in the future. 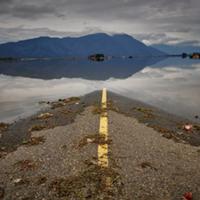 The Cost of Waiting

Natural flood mitigation infrastructure exists for rivers too. Setback dikes could be built further back from the water’s edge to create more riparian area and to give the river room to expand, Lokman says.

Or B.C. could build, or identify, areas that could be intentionally allowed to flood during extreme weather, like certain agricultural fields or secondary river channels.

But before B.C. can build this infrastructure, it needs to consult with communities so the province can understand what different values should underpin flood response, Lokman says. For example, protecting all buildings or protecting coastal livelihood? Fostering stewardship for people, or stewardship for more than human species? 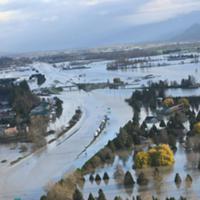 What Will It Take to ‘Future Proof’ BC?

Lokman and Schnitzler say the new flood strategy must consider the overall impacts of climate change and include things like heat waves and forest fires.

“Forest fires impact the trees and how much water forests and soil can hold,” Lokman says. “The recent wildfires mean there’s less water-retaining ability, which contributes to additional stormwater flow.”

That means flood adaptation can’t be siloed and needs to exist as part of the province’s larger response to climate change, and why there needs to be an organizing body larger than a municipal government, but smaller than a province or territory, to guide the efforts, he says.

The B.C. government has completed two workshops for the new flood strategy, which included Indigenous engagement, and is planning more consultation with industry, non-governmental organizations and the public in coming months, according to the Ministry of Forests.