A police watchdog investigation has cleared two Vancouver officers of wrongdoing in the death of a distraught, sword-wielding man on Jan. 5 in the Downtown Eastside neighbourhood.

But mental health and drug use advocates say the report is one more example of how the health-care system and policing are failing people with severe mental illness.

The man, who has been identified as Chester Libo-On by the Vancouver Area Network of Drug Users, had repeatedly said he wanted to die in the hour-and-a-half before police arrived on the morning of Tuesday, Jan. 5.

He’d also hurled himself against the closed door of his supportive housing building.

Between 4:39 a.m., when the first call to police was made, and 6:08 a.m., when officers arrived, Libo-On had smashed a sword against a neighbour’s door, broken into a nearby building and had been seen throwing furniture out of his room at Grace Mansion, a transitional housing facility at 596 E. Hastings St. operated by the Salvation Army.

Video reviewed by the Independent Investigations Office of BC — a civilian-led agency that investigates incidents of death or serious harm involving police — showed people on the street running away from Libo-On, who was still brandishing the five-foot-long sword.

When police finally arrived, they encountered a naked man with “multiple injuries” who strode towards them with the sword raised. Just six seconds after the two officers got out of their car, they shot the man five times.

Video of the shooting shows the man brandishing a long weapon as he walks towards one of the police officers.

“The amount of violence meant that police would have had to respond. But what I feel is missing is, when we know it’s a mental health crisis — we know that the person is delusional or suicidal — it would be really helpful if they were able to bring in... a psych nurse or a social worker who might be able to help with de-escalating or reaching out to communicate with the person in distress.”

Vince Tao, a community organizer with VANDU, questioned why Car 87 — a service that teams a police officer with a registered psychiatric nurse — wasn’t called.

He also wanted to know why officers didn’t attempt to use less-lethal force such as Tasers or a bean bag gun to subdue the man, and why the two officers weren’t interviewed by IIO investigators. (The IIO instead relied on written reports completed by the officers.)

Sgt. Steve Addison, a media relations officer with the Vancouver Police Department, said Car 87 isn’t used with calls that are as violent as the Jan. 5 incident.

“They attend lower-risk calls and conduct community-based assessments. Car 87 would not have been appropriate to respond to such a high-risk and dangerous incident,” Addison told The Tyee, noting that Car 87’s officer and nurse wear civilian clothes and drive an unmarked vehicle.

Addison also said not every officer is equipped with less-lethal weapons such as Tasers and bean bag shotguns. Officers must first apply to carry those weapons, and then complete special training to use them.

To Chan, that makes no sense.

“Every officer is equipped with a gun,” she said. “It just shows you where our priorities are.... They’re all trained in gun use, not trained first with Tasers, or first with de-escalation.” 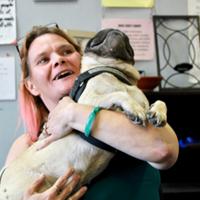 Chan echoed Tao in wondering whether the Jan. 5 shooting could have turned out differently if police or psychiatric professionals had arrived sooner.

“Perhaps he would have been less violent or less delusional,” she said.

According to the IIO report, which was released Aug. 24, an employee of Grace Mansion called 911 at 4:39 a.m. to report that Libo-On was outside banging on windows and that he appeared to be intoxicated.

But because of a high volume of calls that morning, police weren’t able to get there immediately, the report said. Police were also told that the man had gone back to his room.

In its initial press release about the incident, the VPD said it was called by BC Ambulance Service paramedics just before 5 a.m. for help with a 37-year-old man who was aggressive.

According to the IIO report, at around 6 a.m. Libo-On threw a piece of furniture through his window and was shouting, “I want to die!” 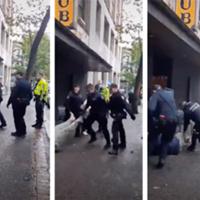 Vancouver Police Shove a Man to the Ground, Then Confront a Witness Recording It

Video obtained by The Tyee shows Libo-On lunging partially out of the window frame while a person in the street below responds, “Don’t do it!” The video then shows Libo-On grabbing the sword off the wall of his room.

Libo-On then walked through the hallways of his building, naked and carrying the sword, and hit a neighbour’s door with the weapon, the IIO report said. He then went outside, and video shows Libo-On wandering through traffic on East Hastings Street, carrying the sword pointed down at the ground.

He then returned to Grace Mansion and ran headlong into the door, hard enough that he bounced off and fell backwards. Video shows him rocking back and forth on the ground, again saying he wanted to die.

The Tyee reached out to the Salvation Army for comment, but did not hear back by publication deadline.

Police didn’t arrive on scene until 6:08 a.m. When the officers arrived, the IIO report said, Libo-On moved immediately towards them with the sword raised, ignoring their commands to stop. Video shows Libo-On striding aggressively towards a police officer, who takes several steps backwards before firing at Libo-On. 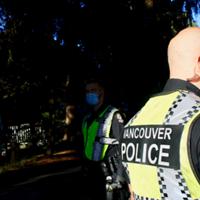 The officers had no opportunity or time to try to de-escalate the situation, the IIO concluded — and it wouldn’t have been appropriate for the police officers to flee, because that could have put bystanders at risk.

When Chan reads the IIO’s report, she thinks about her attempts to seek help for her own daughter. Chan has previously spoken out about how Car 87 is rarely available when people with serious mental health issues need it.

“You never know when your family member may suddenly have a delusion or because of drug use or something, be triggered,” Chan said.

“They aren’t themselves — they become violent or frightened or paranoid. When I hear of these incidents, I always think, ‘Oh, thank goodness it wasn’t my daughter.’”

“It’s very, very painful for all of us, because we’re all afraid it could happen. We could get the phone call that says this happened.”

If you are in crisis or having thoughts of suicide, call the Crisis Services Canada hotline anytime at 1-833-456-4566.