A group of community organizations has told the City of Vancouver they can’t participate in a panel on reducing police involvement in the lives of poor people, including sex workers and people who use drugs.

The 28 organizations wrote an open letter to the city after learning the 19-member panel to work on plans to “decriminalize poverty” would include three representatives chosen by the Vancouver Police Department and one community policing representative.

Meanwhile, eight seats were set aside for community members, including people who are directly experiencing poverty.

“You don’t bring someone who has been harassed, arrested, beaten,” and then tell them to sit down beside police representatives, said Lama Mugabo, a Downtown Eastside community worker and a member of the Hogan’s Alley Society who signed the letter.

The city says that after hearing from the groups it will be meeting with community members to change the process.

Mebrat Beyene, executive director of WISH, an organization that provides advocacy and services for street-based sex workers, said when she heard about the panel’s composition, she struggled to understand how sex workers would be able to participate in the committee in a safe way.

Some would need anonymity to be able to speak about their experiences, she said, and wouldn’t feel free to talk with police representatives in the meeting. She reached out to other groups, who had similar concerns.

“All of us had that immediate, gut concern that this is not a safe process,” Beyene said. “It’s also moved away from the original point which was to talk about police spending and talk about where are we collectively putting our dollars.”

As originally envisioned, the panel would have included:


The community panel is a response to Coun. Jean Swanson’s motion to “decriminalize poverty,” passed by council in July 2020. That motion proposed that the city start the process of seeking alternatives to policing in responding to mental illness, sex work, homelessness and substance use, and shift money from policing to community groups who work in those areas.

While the motion didn’t mention the words “defund the police,” the approach lines up with a movement across the U.S. and Canada to shift public funds from policing to social services. It’s a policy push that’s gathered urgency in the wake of the Black Lives Matter movement that drew urgent attention to police violence against racialized people.

Mugabo said that when the City of Toronto was working on a lengthy police reform process, community members were able to meet and give feedback in a way that didn’t involve police officers. He’d like to see a similar process in Vancouver.

Beyene and Mugabo say they fully supported Swanson’s original motion, which came out of work that had already been done by community groups to draw attention to the constant and intrusive presence of police in the lives of poor people, especially in the Downtown Eastside.

They say the VPD has not truly listened to past concerns about practices like street checks, when police stop someone who is not part of a criminal investigation and question them about their activities or ask to see identification.

Statistics showed Black and Indigenous people were disproportionately affected by the practice, but the VPD defended street checks as a necessary part of policing. After the province introduced new rules for street checks that came into force in January 2020, the VPD reported they had declined by 94 per cent in 2020, but their data still showed a disproportionate number of Indigenous and Black people being stopped by police without evidence of a crime.

When Vancouver’s city council voted to freeze the VPD’s budget in the fall of 2020, the Vancouver police board appealed that decision and sent it to the provincial director of police services for review. The VPD had asked for, and was denied, an additional $5.8 million; this week the VPD reported it is projecting a $4.9-million deficit by the end of the current fiscal year.

Beyene said groups like hers have participated in many government and community-driven processes over the years that have produced reports and recommendations but no action.

One of those reports, Red Women Rising by the Downtown Eastside Women’s Centre, included a number of recommendations, including prohibiting the police from carrying or using lethal weapons, eliminating searches and monitoring of Indigenous women by male police officers and ending street checks. 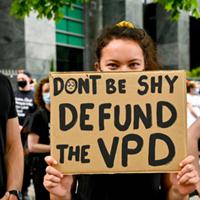 Vancouver Votes to ‘Decriminalize Poverty.’ Over to You, Police and Province

The Red Women Rising report also says other jurisdictions should emulate the Vancouver Police Department when it comes to its Sex Worker Enforcement Guidelines. However, earlier this year, a non-profit group that advocates for sex workers, Living in Community, said it was cutting ties with the VPD because the force had not demonstrated a “sex workers’ rights-based approach” and had refused the training the group offered.

Beyene said she is not interested in participating on the city’s community panel, even if the composition of seats is changed, but is open to continuing to speak with city staff and advocate for decriminalizing poverty. She said she would participate in a new process designed in collaboration with community members and groups.*

“I’m interested in starting with what’s possible in the City of Vancouver,” Beyene said. “Our goal, with our original call... was the VPD budget — diverting funds.”

*Story edited on June 24 at 9:15 a.m. to clarify Mebrat Beyene’s position on participating in the city’s community panel on decriminalizing poverty.