People who live in the Downtown Eastside rallied Tuesday to show their outrage and grief after a man living in a supportive housing building was shot dead by police on Jan. 5.

Members of the Vancouver Area Network of Drug Users held the vigil to protest what they say have been too many incidents of heavy-handed policing in their neighbourhood targeting people who use drugs, have mental illness and live in poverty.

“It’s so sad, because the cops decided to pull out a gun instead of a Taser, instead of a beanbag,” said Samona Marsh, a member of VANDU. “Instead of having a peer who could talk him down.”

People at the rally also asked why Car 87 wasn’t used in this case. Car 87 is a police program that teams a registered nurse with police to respond to mental health calls.

Participants held photos of the man, who was identified by his first name, Chester.

Marsh, one of the organizers of the vigil, said members of the man’s family were in attendance but did not want to speak to media.

Before he was shot, the man was naked, yelling, brandishing a sword and had injured himself running repeatedly into a glass door. Police said they had been called to the scene by paramedics and had received reports that the man had been chasing people with the sword.

Video shows a police officer firing her gun at the man as he strides towards her with the sword. One officer continues to train her gun on the man while another removes the weapon as the man lies naked and immobile on the ground.

“I’m not going to let this go,” Marsh said, adding she can identify with Chester. “I’ve been so high before, got mad, done stupid shit.”

The Vancouver Police Department has declined to answer questions about the shooting because of ongoing investigations by two police watchdog agencies, the Independent Investigations Office and the BC Police Complaint Commission.

VANDU members say they don’t trust those agencies. They’re calling for people who witnessed the shooting to provide photos, videos and witness accounts to the network.

Ellie Taylor, a member of VANDU who attended the march and vigil, said many people who experience problems with the police don’t feel comfortable making an official complaint.

“A lot of people who live down here have post-traumatic stress because of police brutality.”

VANDU’s initiative is providing an opportunity to “document all the police brutality and violent incidents,” Taylor said.

Makeda Martin, a Downtown Eastside community member who spoke at the rally, is the aunt of Regis Korchinski-Paquet.

The young Black woman fell to her death from a Toronto balcony this summer while police were in her apartment; her mother had called police because Korchinski-Paquet was in emotional distress. The officers were cleared of any wrongdoing in the incident.

Martin said it’s important to realize that anyone can end up living in the Downtown Eastside, struggling with mental health or addiction issues. 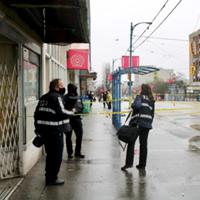 ‘There Has to be a Better Way’: Police Kill a Sword-Wielding Man in the Downtown Eastside

“We’re people, and sometimes people see the addiction or the illness before they see the illness behind the suffering,” Martin said.

The Jan. 5 shooting was the third violent incident involving Vancouver police since November and advocates say there need to be changes when it comes to dealing with people who are in emotional distress.

On Jan. 2, police shot and injured a man during a standoff in the Downtown Eastside after police received reports of a man armed with a rifle.

In late November, a man died after a “physical altercation” with Vancouver police in a Tim Hortons at Main Street and Terminal Avenue.

Police had responded to a report that the man had refused to leave a washroom and said that when he came out of the bathroom he was “agitated and aggressive, which resulted in a physical altercation.”