Despite a relatively quiet year on the Morice West Forest Service Road where Wet’suwet’en hereditary leaders oppose a natural gas pipeline through their traditional territory, the RCMP still spent almost $6 million policing the area, The Tyee has learned.

The spending included the costs of two separate police raids — in January 2019 and February 2020 — on blockades put in place by Wet’suwet’en and their supporters who oppose the Coastal GasLink pipeline.

The total, obtained through a freedom of information request, doesn’t include RCMP activities in the area since April 1.

“We would see RCMP at least two to three times a day patrolling the territory,” said Molly Wickham, who lives in the area and holds the Wet’suwet’en traditional name Sleydo’. “Every once in a while, they’ll send out Houston RCMP. We’ve even seen Burns Lake RCMP out here patrolling, but we haven’t seen CIRG [the RCMP’s community-industry response group] in a significant amount of time, which is probably about two months.”

Wickham is a member of the Gidimt’en Clan, which built a camp on the remote forestry road — including barricades blocking access to construction traffic — in late 2018. The roadblocks were in support of the neighbouring Unist’ot’en house group, which has opposed pipelines through the territory for more than a decade.

On Jan. 7, 2019, Wickham was among 14 people arrested during a high-profile police raid. Following the arrests, RCMP set up the Community-Industry Safety Office, a remote detachment located on the Morice resource road, to maintain an ongoing presence.

During those first three months of 2019, the RCMP spent more than $3.6 million on Coastal GasLink-related policing, according to a previous freedom of information request submitted by The Tyee. That tally includes the Jan. 7 enforcement, establishment of the CISO detachment and nearly three months of patrols.

But tensions — and policing — increased again in early 2020, when Wet’suwet’en hereditary leadership blocked access to the Morice road after the BC Supreme Court issued an injunction allowing the pipeline company permanent access to the route.

RCMP arrested 28 people over five days in early February last year, including arrests at Gidimt’en camp and the Unist’ot’en Healing Centre. In the fiscal year that included the raids, ending March 31, 2020, the force spent an additional $9.5 million.

A breakdown of the expenses indicates that the force spent more than $2.6 million last year on personnel in the remote area south of Houston, B.C. The second largest line item, at a little over $1.5 million, was simply described as “rentals,” while “transportation and communications” cost the force $1 million.

Other expenses included “acquisition of machinery and equipment” ($54,651), “professional and special services” ($1,366), “utilities, materials and supplies” ($30,430) and “information” ($249), in addition to $86 for “other subsidies and payments.” In an email, a spokesperson for B.C.’s Ministry of Public Safety and Solicitor General said the costs fall under the current Provincial Police Service Agreement, which divides costs for RCMP services 70-30 between the provincial and federal governments.

As part of an agreement between federal, provincial and Wet’suwet’en governments in March 2020, the Community-Industry Safety Office was shuttered, and patrols were based to nearby Houston. RCMP senior media relations officer Janelle Shoihet said in an email to The Tyee that hasn’t changed, with patrols continuing from the northern community 300 kilometres west of Prince George.

“We continue to have a presence along the Morice FSR and are conducting routine patrols,” Shoihet said. “There have been no notable incidents or concerns over the course of the last year. The officers supporting these patrols are working from the Houston RCMP detachment and the CISO remains closed.”

Shoihet said she couldn’t comment on whether patrols had decreased in the area. 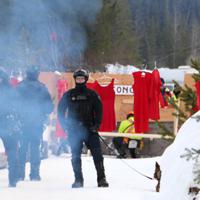 What Does the RCMP Spend on Investigating Missing Indigenous Women? A Tyee Inquiry Remains Unanswered

But Wickham said the reduction is noticeable.

“It’s definitely a relief to not constantly be at risk of being arrested or harassed or ticketed,” she said, adding that RCMP would regularly pull over, ticket and surveille Wet’suwet’en and their supporters.

“We’ve had really bad experiences with CGL security, but we also know that we’re not at risk of going to jail when the CGL security show up.”

Two weeks ago, the B.C. Environmental Assessment Office issued a warning to the pipeline company after Wickham was repeatedly turned back while attempting to monitor pipeline construction on her house group’s traditional territory.

Wickham suspects the shift in policing is a combination of little activity in the area and RCMP resources being diverted to old-growth logging protests on Vancouver Island. RCMP launched a raid on the blockaders’ headquarters Monday, as protesters marked the protests’ one-year anniversary this week.