Once touted as an economic powerhouse, the liquified natural gas industry is on the rocks, according to a worldwide survey of LNG terminals from the Global Energy Monitor, a non-profit research group responding to climate change.

LNG terminals are among the largest capital projects attempted in modern industry, costing up to $30 billion per project. Gas is extracted from underground deposits, piped to LNG plants where it is compressed by cooling to liquid form, loaded onto ships and transported to other markets.

“The sheer size of the projects has exposed investors to catastrophic losses,” said Lydia Plante, lead author of the just-released report.

Canadian LNG is particularly bad off, Ted Nace, executive director of the Global Energy Monitor, told The Tyee. “The problem with the Canadian LNG expansion is that it’s especially vulnerable because Canada is a high-cost producer on a world basis.”

That’s because Canada plans to produce its LNG from fracking — an energy and capital-intensive process to access gas hidden deep inside shale rock.

Canadian LNG comes up short on the global market, said Nace, particularly when it competes against countries where conventional gas sources make LNG cheaper to produce.

And global competition is only getting fiercer. Qatar and Russia, for example, have vast supplies of cheap natural gas. “These super low cost producers,” said Nace, “are not giving up market share without a fight.”

The industry had its biggest growth year in 2019, with a record number of projects getting greenlit. At the end of 2019, companies realized they had overshot, and the LNG market plunged.

Then the COVID-19 pandemic came along and made everything worse, said Nace. “They got the one-two punch. Two years later, the industry is staring at the wreckage of so much boom and bust,” he said. “In reality there isn’t really that much opportunity to go around.”

Meanwhile, gas prices have swung widely, which further increased the risk for projects.

Nace said the pinch on LNG will get stronger as renewables prices drop. And those prices will not will be as volatile. “If you build a renewable [project] there is no question what it’s going to cost because there’s no fuel cost.”

A recent analysis projected cost for renewable energy would fall by around half between 2019 and 2030.

Meanwhile, the oft-cited argument that LNG provides a “transition fuel” is on shaky ground. This year, the International Energy Agency announced that no new gas fields are needed if the global economy is to reach net zero emissions by 2050.

While burning gas produces around half the C02 of coal, it creates a considerable amount of methane — and there is growing evidence that methane emissions from gas supply chains are higher than previously assumed.

The problems besetting the global LNG market have big implications for B.C.

Back in 2013, the BC Liberal Party pledged that LNG would create $1 trillion in economic activity for the province. But that dream never materialized.

Since 2014, seven of 12 LNG projects proposed for Canada’s west coast have been cancelled. Of the projects remaining, only LNG Canada is currently under construction.

LNG Canada — the biggest private sector investment in Canada’s history — has been beset by delays and cost overruns.*

The Coastal GasLink pipeline being built to supply it with gas has been the site of fierce ongoing resistance from the Wet’suwet’en whose traditional territory would be impacted.

With each delay, said Nace, the cost of the project goes up. “It really undermines the overall economic feasibility of the project. So if anything, they’re in worse shape than when they started. And often a project like this will flounder around for a while, more money will get sunk into it, and in the end, it doesn’t happen anyway.”

For LNG Canada, he said, “There is still time for them to cut their losses and stop.”

When it comes to projects not yet in construction, the situation is even worse. Kitimat LNG — the second largest project proposed in B.C. — was shelved after Chevron and Woodside pulled out of the project.

Other projects like Woodfibre LNG are struggling to find financing.

“I think we’re going to see them disappear from the books next year,” said Nace. “If you look at them closely though, you’ll see that many of them actually are already abandoned.”

A 2019 report from the Queensland University of Technology found that the LNG sector is infamous for “cost blowouts,” and only 10 per cent of projects come through under budget.

Yet efforts to establish an LNG industry in Canada have received billions in subsidies from provincial and federal governments. 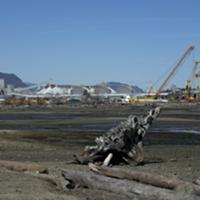 LNG in BC Is a ‘Losing’ Bet, Report Finds

LNG Canada alone has received $5.3 billion from the province.

In response to a Tyee request for comment on the Global Energy Monitor report, the B.C. Ministry of Energy, Mines and Low Carbon Innovation said LNG development in the province will be required to "guarantee a fair return for B.C.’s natural resources, guarantee jobs and training opportunities for British Columbians, respect and make partners of First Nations, and, protect B.C.’s air, land and water, including living up to the Province’s climate commitments.”*

But Nace sees a pattern in the struggling LNG sector in B.C. and Canada. “I think that the tendency in Canada increasingly has been: project gets delayed; project gets opposition; then project starts to get in trouble and private investors start to move out; and then the government sector moves in.”

His view: “I think the public should really keep an eye on not letting the government go down that road again.”

* Story updated on July 5 at 8:58 a.m. to reflect that LNG Canada has not announced its finish date has been pushed back to 2025.