Indigenous groups across the country have put out a nationwide call for solidarity actions to protest development on their territories.

“From coast to coast we stand united. We must defend our relatives that are under attack by these invaders,” the video says.

It features more than a half dozen land defenders from First Nations across Canada, including Wet’suwet’en and Secwepemc members who oppose pipelines, representatives of the Six Nations’ 1492 Land Back Lane movement in Ontario, and Mi’kmaq defending their treaty right to fish on the East Coast.

“As Indigenous grassroots people on the frontlines, we call on you to join us in solidarity,” says the video. “From Nov. 23 to Nov. 29, as a national call to action to support and respect our sovereignty, we call on you to demand justice for our people, to hold the companies committing genocide accountable through direct action and rallies.”

Jen Wickham, member of the Wet’suwet’en Gidimt’en Clan, says the call comes as members who continue to occupy the territory where Coastal GasLink is building a natural gas pipeline are frequently harassed, followed and questioned by industry workers and the RCMP.

She said the Wet’suwet’en received nationwide support from other Indigenous groups when RCMP were arresting land defenders blocking access to the pipeline company earlier this year, and they wanted to support others defending treaty and land rights. Gidimt’en land defenders pitched the video idea to the other nations and the group collectively wrote the script, recorded themselves reading it and worked together on a final edit.

Skyler Williams, spokesperson for the 1492 Land Back Lane movement that opposes a real estate development on Haudenosaunee territory, said there are about 10 Indigenous groups defending land and treaty rights that regularly check in with one another.

“When this call to action started going on, we all talked to everybody who talks to everybody else and we all put our heads together to create that [video],” he said.

Wickham said the groups have always shared information and ideas. 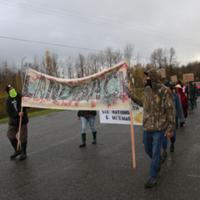 “We’ve always been supportive of each other. We’re obviously aware that this is not an isolated problem. It’s not just the Wet’suwet’en that are being denied their rights as Indigenous people,” Wickham said. “We have been wanting to show more official support to the nations that are defending their land and the water, but because we are currently involved in our own fight, we just have limited capacity.”

Wickham adds that it’s too soon to say what this week’s solidarity actions may look like. With increased pandemic restrictions limiting public gatherings, she said they could constitute social media campaigns or holding ceremonies.

“We really want to leave it open to people to organize and participate in ways that make sense for them. So, you know, folks that are in larger urban centres can participate differently than people that are more isolated,” she says.

The call comes as Coastal GasLink updated its website Friday to say that an additional 528 pipeline workers are in the field this month, for a total of more than 4,000 people working on the pipeline and related facilities in November.