Provincial health officer Dr. Bonnie Henry said today that the two-week ban on social gatherings with people outside your immediate household imposed on the Lower Mainland on Nov. 7 will now apply to the entire province and be extended until Dec. 7.

The initial measures were intended to break the chains of transmission in the province’s most affected areas.

But Henry said COVID-19 transmission linked to social gatherings has spread into health care, businesses and schools and is now a concern everywhere.

“It has become apparent that this surge in transmission is happening across the province,” said Henry. “We are seeing increased community transmission and effects on our health-care system in every area.”

Masks will also be mandatory in all public indoor spaces through an order under the Emergency Program Act, said Henry, who resisted mounting public pressure to require masks for nearly eight months. That will include stores and offices, but not schools.

“We need to urgently reduce the level of transmission and our cases across the province,” said Henry. “We need to ensure our health-care system can meet the health needs of all of us in B.C.”

Non-essential travel within or outside one’s local community is also strongly discouraged, although Henry stopped short of issuing an order to ban it.

“We are in our second surge, and it is proving to be a challenge,” said Henry, who last week said the province’s contact tracers are reaching their limit. “We need to relieve the stress on our health-care system, right now.”

Under the new mask order, employees and patrons of all public indoor spaces and workplaces will be required to wear a mask in shared public spaces, except when eating or drinking in areas that serve food.

People with disabilities or conditions that make it difficult to put on or remove a mask are exempt, as well as children under two.

Henry also announced in-person faith and community gatherings of any size are suspended provincewide until Dec. 7. Gatherings of up to 50 people had previously been allowed.

Weddings and funerals with less than 10 people and no reception, as well as community meetings such as Alcoholics Anonymous or classes that are held in places of worship may still continue with distancing measures and limited numbers.

“We need our faith services more than ever right now, but we need to do them safely,” said Henry.

And while indoor and outdoor sports can continue, spectators and inter-region travel are not allowed due to transmission during pre- and post-game mingling.

And businesses are being asked to suspend any returns to the office for employees who’ve been working at home. The B.C. government had begun requiring some employees to return to offices this month.

“These are the means through which all of us can help flatten the curve and do what we want to do in this pandemic, which is our part,” said Health Minister Adrian Dix.

The broad measures to quell the spread of the virus come as the province reported 538 new cases, 309 of which were in the hard-hit Fraser Health region, and a total of 59 outbreaks in health-care facilities.

One more person died in the last 24 hours, and hospitalizations are at a record 217 with 59 people in intensive or critical care.

Two deputy provincial health officers have been delegated from Henry’s office to serve as liaisons with schools and WorkSafeBC to ensure exposures are tracked rapidly and safety plans are being followed.

Schools are seeing people exposed to the virus, but very few transmissions. 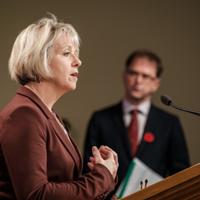 Henry said she will be monitoring risks in bars, where it can be difficult to ensure all patrons and staff are following the rules. Shared staff meals at restaurants and workplace socializing have also been linked to community outbreaks.

“The vast majority of businesses across the province are doing a great job,” said Henry. “When rules are followed and safety measures are in place, we don’t see transmission of this virus.”

B.C. is also planning to hire 950 more contact tracers and 76 community health representatives to do culturally safe contact tracing with the First Nations Health Authority. More than 700 tracers have already been hired since August.

“We know there are vaccines on the horizon,” said Henry. “But right now, we all need to focus our efforts on slowing the spread and bending our curve back down.”