Northern B.C.’s main highway was closed for more than an hour Friday evening as members of the Gitxsan Nation shut down traffic in a show of support for Indigenous rights actions across the country.

The blockade of Highway 16 in New Hazelton, between Smithers and Terrace, was part of a national day of action called for by Haudenosaunee Six Nations members fighting a residential complex on their traditional territory in southern Ontario. While about a dozen events took place in Ontario and Quebec, New Hazelton’s was the only one in Western Canada.

Drumming, singing and carrying signs and banners, the group moved from the visitor centre onto the highway shortly after 5 p.m., where they occupied a bridge in what organizer Hilary Lightening called “a strong message to the government.”

“The Haudenosaunee of Six Nations have issued a call for solidarity across Turtle Island. It’s akin to the same callout that we received from the Wet’suwet’en to shut down Canada,” Lightening said before the event. “What is happening in Canada is this criminalization of land defenders.”

The Haudenosaunee have been occupying a parcel of land on their traditional territory next to the Six Nations of the Grand River Reserve in Caledonia, Ont., since July. The occupation is known as 1492 Land Back Lane, a reference to the year Christopher Columbus landed in the Americas.

The 10-hectare plot is part of the Haldimand Tract, which was granted to the Haudenosaunee in 1784. While it initially extended 10 kilometres on either side of the Grand River, it has been greatly reduced over the past two centuries.

“It’s just another egregious, ‘sure, we have an agreement, but we’re just going to bulldoze the Indigenous people anyway’ kind of deal,” Lightening says. “Really, the callout is on the government to honour the treaties, to live up to their promises for truth and reconciliation, to really listen to us as people, to recognize us as people, and to also recognize that these infractions, these threats on our territories, to the ecosystems, is a form of genocide.”

The Ontario Supreme Court was expected to make a decision Friday on a request from Foxgate Development Inc., the real estate developer planning a residential complex on the land, for a permanent injunction barring the occupiers. Instead the court gave the land defenders two weeks to leave the area before it would make a final decision.

The area has been the scene of similar conflicts for decades, including a long land occupation in 2006 which included violent clashes with police and non-Indigenous residents.

The call to action comes as conflicts over Indigenous rights and title are taking place across the nation. Wet’suwet’en land defenders continue to occupy their territory near Coastal GasLink’s pipeline route; the Secwepemc Tiny House Warriors continue to fight the Trans Mountain Pipeline expansion; and Mi’kmaq in Nova Scotia face racist threats as they exercise their treaty rights to fish lobster.

In addition, accusations of police violence against Black and Indigenous people and people of colour have been in the spotlight in recent months.

The CBC reported that 26 people had been arrested since the occupation began, including two journalists. Ontario Provincial Police tweeted Friday that one additional person had been arrested in relation to demonstrations in Caledonia.

Later in the afternoon, a tweet from the official account of 1492 Land Back Lane said that another arrest had taken place at an “autonomous” solidarity action.

Campbell said organizers were planning for a safe and peaceful protest in New Hazelton. “We intend to let our voices be heard with calmness and respect for each other,” she said, adding that she feared a police presence.

“If they show up, I know I’ll be afraid. It’s not for me I’m afraid for. It’s the young people who are so passionate to learn,” she said. “Our laws were created to keep the peace in the nation and between nations and they’ve been interfered with too often.”

Police kept a distant presence as the rally began and moved to control traffic when land defenders congregated on the bridge. RCMP Staff Sgt. Darren Durnin said the event was “unexpected.”

“I’m trying to keep it safe and peaceful,” he said. “I don’t want to see conflict. I want it to be peaceful.”

As single-lane traffic began to move at about 6:30 p.m., many vehicles honked their support for the protestors as they passed. As darkness fell, those drumming and holding signs continued to occupy one lane of the bridge. Everyone left shortly after 7 p.m.

Lightening, who is from the Gitxsan Nation, remembers attending blockades with her parents in support of the Wet’suwet’en and Gitxsan hereditary chiefs during the Delgamuukw court hearings. In 1997, the Supreme Court of Canada ruled that the nations’s land title had never been extinguished.

Lightening said she organized the event in solidarity with Indigenous struggles nationwide.

“Their battle is our battle. It’s the same battle against colonialism that we’re all facing at this time. In British Columbia and in my territory, our lands are unceded,” she said. “We’ve never signed a treaty, we’ve never surrendered our title, and yet communities have popped up and our lands continue to be dispossessed and degraded through industry and capitalism at the hands of the government.” 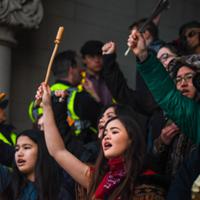 Lightening said the growing momentum behind Indigenous land occupations was hampered by the pandemic, which made gathering in large groups difficult. Meanwhile, as many businesses and schools closed down in the spring, large industrial projects like Coastal GasLink were permitted to continue.

“There was definitely a sense, I believe, from industry and government, that this virus became a pretty opportunistic time for them to carry on with their work unfettered and unquestioned and unchallenged,” she says.

“There’s a lot that is continuing to go forward throughout COVID and yet, suddenly, our ability to mobilize and gather has been questioned.”

Those attending Friday’s event in Hazelton were asked to wear masks and social distance.