The BC NDP government’s three years have brought big highs and lows in its relationship with Indigenous communities.

Since the New Democrats took power in May 2017, the province has implemented the Declaration on the Rights of Indigenous Peoples Act, moved ahead with the Site C hydroelectric dam against the wishes of Treaty 8 First Nations, and supported the RCMP in removing Wet’suwet’en land defenders from their traditional territory.

But as a snap election looms and Indigenous people, who make up six per cent of possible voters, are weighing their options, the overall record might tip in the NDP’s favour, while frustrations with the previous BC Liberal government continue to linger.

The Union of BC Indian Chiefs has repeatedly called out the NDP government for transgressions over the past three years, including its treatment of Wet’suwet’en land defenders and the decision to proceed with Site C (which it described as a “bedraggled boondoggle” and a slap in the face).

During the last campaign the NDP promised a review of the Site C project, started under the previous Liberal government. Former premier Christy Clark had promised to push the project “past the point of no return” before the election to deny any new government the chance to reverse course.*

Six months into his term as premier, John Horgan announced the project would go ahead. “I am not the first person to stand before you and disappoint Indigenous people,” he said when announcing the decision.

Chief Roland Willson of the West Moberly First Nation was among those disappointed. As recently as Sept. 28, he and other Indigenous and environmental leaders called for the project — which is now several billion dollars over budget and faces geotechnical issues — to be halted.

The nation is currently engaged in a lawsuit with the province over the ill-fated dam. But Willson says he doesn’t necessarily blame the current government.

“Site C is a bad, bad idea,” Willson says. “Whoever tries to pick up the reins on that thing and tries to make it work, it’s just going to bury them.”

While he supported the NDP in the last election believing the party would put a halt to Site C, this year he says he won’t throw support behind any one party. “It’s six to one, half dozen the other,” he says.

“Outside Site C, I think this NDP government has done more for the First Nations in the last three years that they’ve been in than the Liberals did in the 16 years they were in.”

West Moberly sits within Peace River South electoral district, a Liberal stronghold. Mike Bernier has been MLA since 2013, winning the last election with nearly 76 per cent of the vote. While another Liberal win is expected in the riding, Willson hopes to see the Green party gain a few seats and have a stronger voice in the legislature.

The Greens are the only party that has said it would immediately stop construction on Site C if elected.

Boondoggles aside, UBCIC’s Grand Chief Stewart Phillip has offered his support for Horgan’s decision to move ahead with an election, citing the need for a stable government. Phillip, who is preparing for both a kidney transplant and heart bypass surgery, applauds B.C.’s health-care system and the government’s approach to the pandemic.

“Generally speaking, I support the NDP,” he says. “However, there are times that I’m very, very upset and angry with decisions that are taken by government.”

He says the NDP’s reversal on Site C brought him “very close to ripping up my membership,” but describes the relationship as otherwise solid.

Phillip says the Declaration on the Rights of Indigenous Peoples Act is a “shining example” of the government’s willingness to work with First Nations.

The act passed unanimously in the legislature a year ago, making B.C. the first province to enshrine the UN Declaration on the Rights of Indigenous Peoples into law.

Minister of Indigenous Relations and Reconciliation Scott Fraser called the act “a commitment to respect, promote and advance the rights of Indigenous peoples.”

Three months later, the RCMP — supported by the provincial government — was preparing to arrest Wet’suwet’en land defenders and supporters blocking access to the Coastal GasLink pipeline route through their territory.

Wet’suwet’en Hereditary Chief Na’Moks, whose English name is John Ridsdale, says the NDP government, which declined to meet with Wet’suwet’en leadership prior to the arrests, “totally let us down.”

“It’ll be the first time in my life I won’t be voting NDP,” he says, making it clear that he spoke only for himself, not the nation as a whole.

But while he doesn’t support the NDP’s bid for re-election, he says he also doesn’t think the Liberals have a shot in Stikine, where one in three voters are Indigenous. “They’ve got a very proven record up here of not upholding Indigenous rights.”

Three years ago, Na’Moks stood with the UBCIC in its “Anyone But Christy” campaign aimed at then-Liberal leader Christy Clark. It gave the former government a failing grade.

Grand Chief Phillip says the BC First Nations Leadership Council has made strides working with the current government after unsuccessful efforts during the Liberal years.

“They just absolutely refused to engage,” he says, adding that the Liberals’ current election promise to suspend the sales tax “reflects a state of chaos and desperation.”

Terry Teegee, regional Chief of the BC Assembly of First Nations, echoes the sentiment that more progress has been made under the NDP than the previous government. “Looking at their political promises to everybody, within the three years, I think they’ve fared OK,” he says, estimating that Horgan’s government has achieved close to 80 per cent of its plans.

By comparison, he describes the previous Liberal government as “a difficult relationship.”

“There were a lot of empty promises and a lot of non-commitment in changing the way they govern in terms of Indigenous peoples. They started coming around near the end of their term, in 2015, but it was far too late,” he says.

In addition to DRIPA, Teegee points to recent successes under the current government, such as changes to the Environmental Assessment Act that give First Nations greater representation in the approval process, as well as the BC First Nations Gaming Revenue Sharing Limited Partnership, which he says had been on their agenda for 20 years.

Looking ahead, he says Indigenous voters will be considering the need for capacity and resources to deal with COVID-19, as well as making Indigenous groups part of the economic recovery. Following through on the transition of child welfare to First Nations and protection of Indigenous languages are also considerations in the upcoming election, he says.

Teegee says he needs to remain non-partisan, and points to strong Indigenous candidates in all three main parties.

“I’m not advocating for one or the other. My message is for First Nations to get out and vote, regardless of what party they’re supporting. That’s really our message from our leadership from BCAFN and First Nations Leadership Council,” he says.

Similarly, Phillip says he particularly supports Indigenous female candidates. “I’ve always supported women undertaking a greater and more active leadership role. I believe that if we had parity in leadership, the world wouldn’t be in such a mess,” he says.

Phillip adds that he was disappointed by the NDP’s decision to nominate former member of Parliament Nathan Cullen in the Stikine riding over former Tahltan Nation president Annita McPhee. 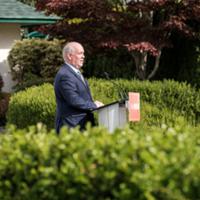 “You get these moments in your life, they come one time only, where you can demonstrate your principles, and he failed. Had it been me, I wouldn’t have hesitated to step aside,” he says.

Ultimately, many First Nations aren’t looking for a party to represent them, but to work with them. In 2014, Tŝilhqot’in Nation won title to 1,800 square kilometres of territory. Chief Jimmy Lulua of the Xeni Gwet’in First Nation, a member of the Tŝilhqot’in Tribal Council, says the nation deals government to government and nation to nation.

“For us, in Xeni Gwet’in and the Tsilhqot’in Nation, we don’t really pay too much attention because we believe that our nation has proven it doesn’t matter who we deal with. Elected officials are just the face. How we look at it is, we deal with B.C., we deal with Canada, regardless of what parties are in there,” he says.

“So, we have a pretty good relationship with all parties. When we go visit them, we make sure we visit all them — Greens, the NDP, Liberals, you name it, we try to meet all of them.”

*Story updated on Oct. 8 at 9:11 a.m. to correct information about the BC Utilities Commission's review of Site C.