A northern British Columbia gold mine is reporting its second fatality since beginning operations three years ago.

In a news release, Pretium Resources Inc., which operates the Brucejack Mine about 300 kilometres north of Prince Rupert, announced a worker had been injured last Friday and died Sunday in hospital in Terrace.

Patrick Critch, who the Terrace Standard reports was from Newfoundland, had been injured “during maintenance at a support facility on surface,” the company said.

“The safety and well-being of our employees is our topmost priority and we will investigate the incident fully,” Pretium Resources CEO Jacques Perron said in the release. “This tragedy is a devastating reminder of the critical importance of safety in all aspects of mine site operations.”

WorkSafeBC says it will not be investigating the incident. Mining is the province’s only industry not covered by the Workers Compensation Act and the provincial agency. (Aside from federally regulated industries like ports and railways.)

Instead, mine safety is addressed under the Mines Act and regulated by the Health, Safety and Reclamation Code for Mines in British Columbia.

That should change, say some mine safety advocates.

In an email to The Tyee, the Ministry of Energy, Mines and Petroleum Resources says B.C.’s chief mines inspector has started an investigation.

It won’t disclose details while work by the Mines Investigation Unit is ongoing, it said, though information related to immediate health and safety risks would be released without waiting for the report’s completion.

However, a report on a death at the mine two years ago reveals concerns about health and safety procedures.

WorkSafeBC did investigate that fatality because it occurred at a labour camp covered by the Workers Compensation Act.

A redacted version of the 29-page report paints a bleak picture of the mine’s safety procedures. The report’s stated purpose was to prevent similar incidents in future.

The February 2018 death came when a driver hired by contractor Tsetsaut Ventures Ltd. to shuttle ore samples was directed to help in a mechanical shop when not busy. He was inflating a tire from a rock truck, a large vehicle used for moving heavy loads, when the tire’s rim assembly blew apart. He was struck and killed.

According to the report, the worker, who had recently been hired at the mine, had not been trained to work in the shop. Hazards had not been identified and he was not being supervised at the time of the incident. In addition, Tsetsaut Ventures did not have a health and safety program that met the requirements of the Workers Compensation Act and the Occupational Health and Safety Regulation.

“At the time of the incident, Pretium had no system or processes in place for shipping, handling or servicing rock truck tires,” the report found. “It did not have a health and safety program that met the requirements of the act and the regulation. The program it did have had neither been approved nor signed off by the company prior to the incident.” Pretium also failed to ensure that Tsetsaut had a health and safety program and to conduct workplace inspections to ensure worker safety, it said.

The WorkSafe report includes a quote from an unidentified person, apparently a worker, who describes a culture at the mine “such that production was more important than safety, and that that particular culture would have originated from the senior management level.”

The report concludes that a lack of safe operating procedures, training, supervision, health and safety program and oversight all led to the man’s death. In May 2019, WorkSafeBC issued a $160,000 penalty to Tsetsaut Ventures Ltd.

In an emailed statement, the company said “since the incident in 2018, Pretium has brought those contracted transportation and services in-house and they are now under Pretium’s direct management.”

“Pretium management continues to review and improve health and safety policies, procedures and practices to target a standard beyond those required,” it said. “However, the recent tragedy serves as a reminder of the critical importance of safety in all aspects of mine site operations.”*

WorkSafeBC’s guidelines state that its “prevention jurisdiction does not extend to mines to which the Mines Act applies.”

There are concerns that mining operations are subject to less stringent oversight and reporting when it comes to health and safety.

When a friend was killed by an avalanche in 2012 while surveying for another mine near Brucejack, he spent six years trying to get answers.

What he learned about oversight and accountability was discouraging. The mines ministry took a year to complete its report into the death and it took two years for Dietzfelbinger to get a copy, which he says was eventually leaked to him.

Dietzfelbinger says every B.C. employer who exposes workers to avalanche risk must have an avalanche safety plan if they are under WorkSafeBC’s jurisdiction.

No such plan existed at the mine. Had there been one, he says, the surveyors would not have been in avalanche terrain that day.

The workers were not carrying personal avalanche equipment, and none was available at the nearby mine site.

“The mining operation simply did not bother to do anything about mitigating the avalanche risk, even though the Health, Safety and Reclamation Code for Mines in British Columbia, in Section 19, explicitly states that no work shall be done unless a number of things have been evaluated and ‘avalanche’ is listed there,” Dietzfelbinger says.

“Under WorkSafeBC jurisdiction, there would have been an avalanche forecast there. Whether the whole thing would have happened the same way, you can never say,” he says. “All you can say is, nothing approaching a state-of-the-art risk-management system was in place. As somebody who works in the field, I can say that if there had been a forecast there, it’s very likely that they wouldn’t have gone into that terrain.”

Stephen Hunt is District 3 director with the United Steelworkers, which represents over 50,000 workers in Western Canada. Workers at Brucejack, a non-unionized mine, are not among them.

He says the union has been trying to bring mines under WorkSafeBC and its predecessors for decades.

“It’s historic. Since mining started in British Columbia, it’s always been covered by the Ministry of Mines. It’s one of the only work groups that aren’t covered by WorkSafe or the Workers Compensation Board,” Hunt says. Although mine workers are still insured under WorkSafeBC, the current system does not allow for as stringent safety protocols.

“It’s on the prevention side that it’s different. Ministry of Mines is responsible for the health and safety of miners,” he says. “It’s somewhat different than the Workers Compensation regulations and, historically, not enforced very well. We’ve had trouble with it for years trying to get enforcement.”

In addition, he says, WorkSafeBC is arms-length from government and has more leverage to raise the money needed for prevention and enforcement. 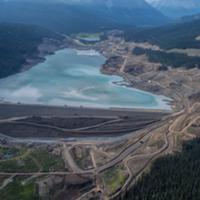 What’s Changed on the Ground Since the Mount Polley Mine Disaster?

Mining health and safety is under the ministry and goes through the normal government budget process. That also means issues become politicized, Hunt says.

“It depends what politicians are in power, as well. Sometimes they just don’t get funded. So, it’s created problems in the past,” he says. “We’ve made improvements in health and safety in mining, and so we should, but when you hear of a death like this, you wonder what’s going on. In the mining industry, or any industry, we shouldn’t be killing anybody or hurting anybody.”

According to LinkedIn, Patrick Critch was the process plant operations superintendent at Pretium Resources. He was based in Vancouver and had 35 years’ experience in the mining industry, including senior management and training positions in Newfoundland, Manitoba and Ontario.

The Ministry of Energy, Mines and Petroleum Resources says Critch’s death is being investigated by a team of specialized professionals in the newly created Mines Health, Safety and Enforcement Division, which was announced last year following recommendations from the Mining Jobs Task Force.

It says a timeline for the investigation is unknown.