It’s the start of month six of the world living with the threat of coronavirus. While restrictions are easing in Canada, a first wave of COVID-19 cases is resurging just south of the border in the U.S.

Further south, in many developing countries, the first wave is just now picking up speed. With fewer resources and restless populations, some of those nations’ governments are seeing their political lives put in danger by the coronavirus.

As citizens are asked to endure lockdowns and economic deprivation as a result of pandemic measures, trust becomes a currency increasingly precious. Eroding it are doubts about the statistics their leaders share, what competence they show in managing the virus and the economy, and where government money flows.

Guatemala is a case in point — one The Tyee is looking in on occasionally as part of a project in partnership with the TulaSalud Foundation, which funds rural public health work in that Central American country. Grassroots opposition to corruption in Guatemala has roiled the country for years, playing a key role in unseating the previous president who was replaced in January by Alejandro Giammattei, a right-wing former physician and director of the prison system. He, too, under the harsh glare of the pandemic, faces severe trust issues.

As July arrives, Guatemala is struggling to deal with a steepening infection curve and a health system leaning towards collapse. The reported numbers have soared from 644 cases and 16 deaths on May 1 to 20,072 cases and 843 deaths on July 2. There is no indication the curve with be flattened any time soon. What took months to unfold across Canada — the outbreaks, the overwhelmed health system in certain regions, the economic and financial repercussions of the pandemic — has been compressed into a matter of weeks.

Still, there were months to prepare. Yet Giammattei’s government is taking fire for not yet managing to provide personal protective equipment for frontline workers.

“At this point, doctors still don’t have the appropriate health equipment,” said Dr. Rubén Gonzalez, former vice-minister of health and one of the leading voices in an alternative COVID-19 response exercise. “Of the total budget assigned for this emergency, only a small fraction, less than five per cent is being used, because the government hasn’t been able to negotiate a price with providers and, as a result, all plans by the government collapse. In the meantime, our health-care workers suffer.”

Since March, when The Tyee first spoke with auxiliary nurse Claudia Tut, the situation has only worsened. “We still don't have PPE. Last month, they gave 25 masks for the four people who are working out of the health post. We've already used all of them up. Right now, we are buying surgical masks with our own money,” she said when we checked in with her recently.

Living in Chamil, a small community in the department of Alta Verapaz, means buying masks in of itself can be an ordeal. Alta Verapaz is Guatemala’s poorest region, in the north-central part of the country. With no supplies at the local pharmacy, Tut often has to ask acquaintances living more than 200 kilometres away in the capital to buy and send her some. Alternatively, she has to travel to Cobán, the nearest town, where she may or may not find what she needs.

But PPE is not the only cost Tut might have to incur. As a mother of five, she is worried about the risk that looms over her, and by extension, her family.

“If I come into contact with someone who has COVID-19, I won’t come home. Instead, I will rent a place and isolate myself for two weeks. Only if I don’t have any symptoms will I allow myself to return.” This adds another cost Tut must pay out of pocket. While she doesn’t feel it’s right, she believes this is the only way she can protect her family.

Health posts like the one in Chamil were meant to be the first line of defense in Guatemala’s health system. With less than one doctor and one bed for every 1,000 inhabitants, the focus, according to Dr. Gonzalez and his colleagues, should have been local. Instead, the country focused on large hospitals, skipping proper triage and sending patients to the capital. “Hospitals were overwhelmed before cases really got out of control, and now that we need them, most are on the verge of collapse,” he said.

Decades of neglect due to a 36-year-long civil war led to a severely under-financed health-care system, whose budget has been 6.3 per cent of the country’s GDP. Lack of co-ordination among services translates into service gaps or duplication in the best of times, and with the pandemic, this fragmentation has only been exacerbated.

Another vital commodity in short supply is information. Tut says most of what she knows about suspected and confirmed cases across her region comes from non-official sources. “It’s all very secretive. My colleagues and I would like that those patients who test positive in [our community], that at least they inform who they are so we can take the necessary precautions. Because at the time our supervisors are still demanding that we continue to vaccinate children, that we fulfill our visits.”

Guatemala’s COVID-19 information crisis has claimed political victims at the top of the government. On June 4, the head of the Department of Epidemiology at the Ministry of Health, Manuel Sagastume, resigned amid allegations that the then minister of health, Hugo Monroy, had concealed data on COVID-related deaths at Roosevelt Hospital, the main hospital in the capital.

Early on in the crisis, Jordan Rodas, Guatemala’s Human Rights Ombudsman, requested the removal of Monroy amid allegations of corruption in the ministry. Such claims of malfeasance and subverting of information grew louder in Guatemala until, on June 19, President Giammattei dumped Monroy and four of his vice-ministers.

But for crucial weeks, the coverup fed into the narrative that Guatemala and its leaders had the pandemic under control, observers say. “They're not giving us the actual number of deaths and cases in [Guatemala]. They're covering up the truth,” said Gonzalez, one who believes suppressed information allowed leaders to claim early successes in the fight against the virus.

Guatemala is not alone in weaponizing data for political gains. Brazil resumed publishing COVID-19 data on June 9 after a Supreme Court order to release the figures amid accusations of censorship. The country’s right-wing government led by President Jair Bolsonaro, a long-time COVID-19 denier, had much to gain from data meddling as the number of deaths and cases soared. In Chile, Minister of Health Jaime Mañalich resigned after errors in the case count came to light. New data shows the South American country has 242,000 confirmed cases, having now overtaken Italy.

Guatemala’s government is also under fire for limiting testing, which has resulted in inaccurately low tallies of cases and deaths. “We're not doing the testing that we should be doing,” said Gonzalez. “We're currently doing between 1,600 to 1,800 tests a day. The minimum testing we should be doing is 10,000. And according to the World Health Organization, Guatemala should be doing 50,000 tests a day. It’s simple. If you don't test, obviously you don't have cases to report.” 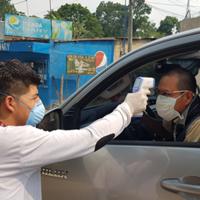 Guatemala, the BC Connection and COVID-19

Human rights ombudsman Rodas has been among those criticizing the slow pace in the decentralisation of testing, and “a lack of agility in the administrative processes to provide medical and paramedic personnel with optimum equipment.”

In Tut’s community of Chamil, testing can only be carried out by a small group of approved personnel that then send the sample to a large municipality for testing. Despite 19 years of experience working in the health sector, she and her colleagues at the community’s health post have not been trained to administer tests. “You really feel like your hands are tied and you wonder what you really are doing to help,” she added.

When the auxiliary nurse chose her profession many years ago, she wanted to do right by her community. But she says crises like this really test her commitment. “We are trying to do our job, as best as we can, but it’s hard to succeed under these circumstances. What we need is resources, proper training and better information.”