[Editor’s note: Four years ago, a spike in home prices and rent rates spurred B.C. residents to call for change and politicians to respond with new taxes to prevent speculation, and funding to build housing. Then the COVID-19 crisis hit. In this special series, The Tyee focuses on how families are faring in Metro Vancouver’s housing market, whether new policies are making an impact, and how to build a resilient housing system post-pandemic.]

After raising her own kids, Deanna Pointe lived alone in a one-bedroom apartment in East Vancouver for 10 years. That changed when she became the guardian for her granddaughter and grandson, now 12 and 16, who had been placed in foster care. “I told the ministry that I had to take care of these kids.”

Pointe and her grandkids moved into a three-bedroom apartment in a building run by Vancouver Native Housing Society and for the first time Pointe’s 12-year-old granddaughter had a bedroom of her own.

Then, just a few months ago, another granddaughter needed help. Scarlett Faust, 24, had just got out of a relationship and needed a place to stay with her two kids. Pointe again opened her home — but accommodating two adults and four kids in a three-bedroom was a tight fit.

The family was recently able to move into a four-bedroom apartment in the same building, giving everyone a little more breathing space.

Pointe and Faust say living together in this multi-generational way is working out well: when Pointe is having difficulty relating to the teenagers in her care, Faust can step in to help, and when Faust wants to leave the house she can leave her four-year-old daughter and five-year-old son with their great-grandmother.

“I think the dynamics in our family, they’re really strong and we have a lot that we teach each other,” Pointe said.

“I never grew up with my family, I never got to know my family until I was older, so when I started having my own family, I kept them close.”

When Pointe was a baby, her family was ripped apart by the Sixties Scoop, a term for the period from the 1950s to the 1980s when child protection workers took thousands of Indigenous children away from their parents and placed them with non-native families.

When she was just a year old, Pointe was taken away from her Cree family in northern Alberta and placed in an orphanage run by nuns. She stayed there until she was five, and remembers being able to meet her siblings just once a year at an annual event at the orphanage where children from different age groups could mingle.

Pointe was eventually placed with a non-native family, but starting at the age of 11 she ran away repeatedly, always seeking out the homes of her siblings.

“It created a lot of displacement and a lot of the social issues. We’re kind of in an era that we need to repair a lot of that trauma.”

Housing is central to healing from that trauma. But around 2000, Indigenous housing agencies began facing a big unknown: many of the long-term operating agreements they had with government were coming to a close and funding was being ended.

David Eddy, CEO of Vancouver Native Housing Society, said that while theoretically this meant the housing providers would now own the buildings, in reality most units are subsidized so deeply that many agencies would either have to sell their properties or raise the rents.

The operating agreements were ending at the same time that home prices and rents had spiked and 41 per cent of Indigenous renters in Metro Vancouver were already considered to be in dire need of better, bigger or more affordable housing, compared with 31 per cent of non-Indigenous renters.

It could have been a crisis. But instead First Nations and Indigenous-focused housing providers are planning to build hundreds of new units, many of them designed for families.

That’s because in 2018 the B.C. government introduced a $550-million Indigenous Housing Fund to build 1,750 homes over 10 years. The fund applies to both on-reserve and off-reserve projects — making B.C. the first province to fund on-reserve housing, normally the responsibility of the federal government.

In Metro Vancouver, eight Indigenous Housing Fund projects have been approved, including three on reserves.

Eddy said he expects the COVID-19 crisis will delay the province’s plan to call for a new round of Indigenous housing applications this spring, but said is confident that the current B.C. government will move forward with promised funding.

The Ministry of Municipal Affairs and Housing says there have been no changes to the funding or timelines for B.C.’s 10-year housing plan.

Tenants who live in Vancouver Native Housing Society buildings have been hit by the financial impacts of COVID-19, Eddy said. Many can no longer pay rent and the society has started food delivery programs in several of its buildings to support people who are struggling.

Tenants are protected from eviction while B.C.’s state of emergency continues. Eddy said he trusts the provincial government to cover the lost rent.

“We’re funded by the province of B.C. almost entirely. If they tell us there is no eviction policy... then for me it’s as good as a guarantee,” Eddy said.

Eddy said his organization has applied to build a new 90-unit building in Vancouver’s Grandview-Woodland neighbourhood, although that project may now be delayed.

“Under the Indigenous housing program, because of the significant injection of cash, we could make a project like that work,” Eddy said.

Multi-generational families like Deanna’s are common in the urban Indigenous community, Eddy said, and housing providers are focused on building large units: apartments with four or five bedrooms.

Vancouver Native Housing Society and other housing providers are obliged to follow federal national occupancy standards that prescribe, for instance, that there shouldn’t be more than two people sharing a bedroom.

“But we will turn a blind eye occasionally because it’s more important that families are together,” Eddy said.

“That’s why we were really pushing for the larger family units in our new projects.”

After an over 20-year absence from providing housing, the federal government announced a National Housing Strategy in 2017 which includes an Indigenous housing strategy.

Housing providers had to spend a lot of time lobbying for a specific focus on the urban Indigenous population, efforts that paid off when the Canada Mortgage and Housing Corp. recently announced there would be a special initiative focused on urban, rural and northern Indigenous housing.

But, Silva said, Indigenous housing agencies haven’t seen any funding connected to that strategy yet.

Silva said that another benefit of B.C.’s Indigenous Housing Fund is to get the funding First Nations are required to create a housing agency and collect data on the actual housing need in the community.

“Which is great because in First Nations housing, we don’t have a lot of data,” said Silva, who is also a member of the Squamish Nation.

Silva was recently appointed to a housing society the Squamish Nation created. Unlike off-reserve projects, which have to secure land to build on, First Nations who plan to develop on-reserve projects already have the land, she said.

“We’ve got some fairly big ambitions — we’re going to try to build 1,000 houses in the next five years,” Silva said.

“And we’re looking at many different options, from supportive housing to lower-income housing to affordable housing, seniors housing and homeownership models as well.”

“We like to be around our people,” Pointe said. “When you’re with your people, we know the struggles we have. We know the ceremony we have. It doesn’t matter what tribe or clan you’re from, everybody has their cultural ways.”

Pointe recalled looking for a place to rent in Edmonton as a young woman, and being asked by a prospective landlord “Are you an Indian from India, or an Indian from 97th Street?” — a reference to what was then Edmonton’s skid row.

“I didn’t even know how to answer her,” Pointe said.

Earlier this year, with tensions high over protests and rail blockades in support of Wet’suwet’en hereditary chiefs who oppose a natural gas pipeline, Faust said she noticed a particularly hostile environment in the city. As a young Indigenous woman, the threat of physical violence is always at the back of her mind.

But when she walks through the doors of the housing complex, Faust said she feels safe and can relax. 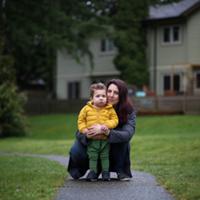 There are other families Pointe and Faust know who need better housing — for instance, a grandmother, daughter and three grandchildren living together in a two-bedroom apartment.

Silva said that as welcome as the province’s $550 million Indigenous housing fund is, “we could definitely use a lot more.”

“Our mandate is to bring these members home to their community and their family and their culture and start creating a healthy community,” Silva said.

This article concludes a series produced with financial support from SFU Vancity Office of Community Engagement. Support for this project does not necessarily imply endorsement of the findings nor content of this report. Funders neither influence nor endorse the particular content of reporting. Other publications wishing to publish this series, contact us here.