Mazdak Gharibnavaz was laid off from his job at the end of February, and applied for B.C.’s emergency rent supplement as soon as applications for the program opened on April 9.*

Gharibnavaz was able to pay rent for April, but it's a different story when it comes to May. He still doesn't know whether he'll get the $300 supplement by the time his rent is due, and although he was able to successfully apply for employment insurance, that benefit only covers up to 55 per cent of earnings.

Before the impacts of COVID-19 started rolling through the economy and Gharibnavaz was working full time, his $1,500-a-month rent already ate up half his pay check.

Now, with the prospect of that income cut in half and no idea when the $300 will come through, the math just isn't adding up. Applications for another emergency benefit, a one-time $1,000 payment from the B.C. government, haven't opened yet.

"With food and utilities, it doesn't make sense to pay rent," said Gharibnavaz, who also sits on the steering committee of the Vancouver Tenants Union.

"Just in terms of income, the percentage that it would eat up from what I get from EI would be overwhelmingly high."

Economists say this situation is completely unprecedented: a worldwide pandemic that has most people staying home, restaurants and other businesses closed, borders shuttered, and millions suddenly unemployed. In Canada, federal and provincial governments have rushed in with a number of income and rent support programs to try to stave off the worst of the economic damage.

In Vancouver, the city with the highest gap between housing prices and incomes in North America, renters have been left questioning why they should pay so much of their now meagre incomes to landlords.

Meanwhile, landlords — especially smaller "mom and pop" landlords who rent a basement suite or a condo — are anxiously wondering if their tenants will be able to pay the rent, so they can in turn pay the mortgage.

"These are a lot of people, their housing is contingent on them having a secondary suite, that's how they got their mortgage financing for their principal residence," said David Hutniak, the CEO of LandlordBC.

"They all have regular jobs or they're pensioners on fixed incomes, and we're getting a lot of very nervous folks."

Homeowners can apply for a mortgage deferral, an option the Canada Mortgage and Housing Corp. is now allowing banks to offer for CMHC-insured mortgages.

But that option doesn't make sense to the most vulnerable homeowner-landlords. People who bought in the last three years are "heavily-leveraged," said Hutniak, and absolutely depend on rental income from a secondary suite to make mortgage payments.

While mortgage deferral stops payments for a time, the interest continues to be added to the outstanding principle of the mortgage and "when your payments start again, your mortgage payment might be based on the total amount you then owe," according to CMHC — meaning deferral will cost homeowners more in the long run.

'Which side are you on?'

The B.C. government put an eviction moratorium in place on March 25, which has eased some fears, said David Hendry, an organizer with the Vancouver Tenants Union.

"Renters will not lose their homes during the state of emergency if they are unable to pay all of their rent, and the government is continuing to look at how to support renters coming out of this crisis," BC Housing communications staff wrote in an email to The Tyee.

With high rents across B.C., but especially in Vancouver, Hutniak would like to see the B.C. government increase the amount that renters can get for the rent supplement (currently $300 for individual renters, or $500 for renters who have dependents).

The Vancouver Tenants Union is urging renters and small landlords to band together to push for a complete rent and mortgage freeze — not deferrals.

"We're launching a campaign... to get small landlords to try to look at the big picture here and say, 'Which side are you on?'" Hendry said.

"Does it make sense to try to get blood from a stone and harass your tenants, or does it make more sense to push pressure on your member of Parliament and the big banks and try to get real cancellation of mortgage payments?"

But that idea raises alarm bells for Kevin Milligan, a professor of economics at the University of British Columbia.

Milligan consulted with the federal government on the design of the Canada Emergency Response Benefit, a $2,000-a-month benefit widely available to COVID-19-impacted workers even if they aren't covered by employment insurance.

"I'm formally in favour of the... model where we front families the money and then they continue to make payments," Milligan said.

"The economy is not set up for people to take stuff for free — in the same way that the right way to handle people who are short of money for food is to give them money to go buy food, rather than allow them to go and take food from the grocery store without paying."

Despite the unprecedented shock of COVID-19, the economy can handle rent and mortgage deferrals, Milligan said, where the deferred payments are expected to be made up at some point in the future.

When it comes to how close Canada is to exhausting government's financial resources, Milligan said "we're not there yet" — but if the crisis continues much longer, that will change.

"The magnitude of the federal level intervention is pretty massive," he said, with the federal government paying around $40 or $50 billion a month to fill in the gaps left by the halted economy.

Compare that to Canada's normal monthly gross domestic product — $200 billion a month — and the magnitude becomes clear: federal interventions currently make up about a quarter of GDP.

"That's why we all have to hope that the crisis abates soon," Milligan said.

As to how the crisis will affect the wider real estate market, it's anyone's guess. Listings are down sharply, but realtors say some sales are still happening at pre-pandemic prices.

David Hutchison, a Vancouver realtor, said he expects to see that change the longer the crisis goes on. He said it's unlikely banks will give mortgages to people whose only income source is the CERB benefit.

"People have asked me a number of times over the years, what would it take to shock the Vancouver housing market," Milligan said. 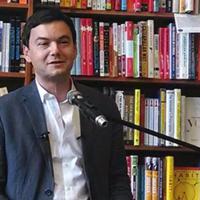 Thomas Piketty, the Brilliant Economist of Inequality, Is Back with a Solution

"I've always said, 'Well I suppose there are a few things and one of them would be give me 10 per cent unemployment and things would look very different.'

"Now I think we're going to have 10 per cent unemployment."

As for Vancouver's notoriously tight rental market, Hutniak said he's heard of renters, especially students, giving notice and simply leaving the city. And going by rental listings posted on Craigslist, some property owners are now listing their suites as long-term rentals because Airbnb bookings have dried up.

"There are going to be increased vacancies as we go forward... so in theory that will have some impacts on rents," Hutniak said.

"But we were already at zero vacancy, so is it going to influence the wider market? I'd say not."

This article is part of a series produced with financial support from SFU Vancity Office of Community Engagement. Support for this project does not necessarily imply endorsement of the findings nor content of this report. Funders neither influence nor endorse the particular content of reporting. Other publications wishing to publish this series, contact us here.

*Story updated on April 23 at 9:30 a.m. to correct that Mazdak Gharibnavaz applied for B.C.’s emergency rent supplement on April 9 when applications opened, not March 25 when the program was first announced.