First, a reminder. Thomas Piketty is the "rock star" economist who exploded onto the scene in 2012 with his first major book, Capital in the 21st Century. It sold in the millions, numbers not seen for a book on economics since the 1890s with Henry George's Progress and Poverty (which for two decades sold more than did the Bible). Given his status, Piketty’s next book was much anticipated by his fans, me included.

I depended heavily on his previous volume in previous writings, using his theories to explain why Vancouver Millennials are basically screwed. In short he said that inequality has separated wages from housing costs, not just in Vancouver but virtually everywhere, such that no amount of new construction is going to fix this problem.

The problem is not supply, it's inequality. Piketty explained that the middle class, as we knew it, was a historical accident brought on by a series of catastrophes: the First World War, then the global depression then the Second World War. These three sequential events destroyed the portfolios of the rich, and thus reduced inequality. The wealth of the rich was destroyed by bombs dropped on factories, by a 90 per cent top marginal tax rate, and by inflation that meant that wartime debts owed to investors magically vanished.

The losses of the rich, combined with a revived post-WWII economy, meant that the rigged game favouring the global rich took a short three-decade hiatus (from 1950 to 1980). For the first time in, well forever, wage earners got a decent share of productivity gains.

As a result factory workers, butchers and store clerks could for the first time afford a five-room ranch house, a new Chevy, decent health care and a vacation at the lake every year. And oh yeah, mom didn't have to work and the kids could go to university for basically free.

All that came crashing down, according to Piketty, in the 1980s when the normal rules of capitalism came roaring back after what some people call the Reagan-Thatcher Revolution, named for the conservative leaders of the U.S. and U.K. whose policies favoured the wealthy and corporations, and reduced the regulatory role of government. “Reaganomics” slashed taxes on unearned income (such as capital gains) to 20 per cent, the lowest since before the Great Depression.

Returning capitalism to “normal” in this way, he said, has caused wealth to gradually migrate to people who already have wealth until a small number of people (call them the .1 per cent if you want) gradually own more and more of everything — even your house — while wage earners slowly descend back to the normal capitalist state of nature, getting paid just enough to put a roof over their head, buy a few suits, an old car and max out credit cards. Sound familiar?

So that was his first stone hurled into the pond of an economic discipline that had become inured to the bad place the world capitalist order was taking us.

How does this new book differ? Well for one thing Piketty has backed off on totally crediting those three linked catastrophes for the brief three-decade reprieve from inequality. Taking a deeper dive into world history, and especially European and U.S. history, he finds the seeds of an expanding middle-class actually precede the First World War. He finds them in the 16th amendment to the U.S. constitution which paved the way for a progressive income tax; in the case of Sweden which shifted almost overnight from crushing social inequality to a more equitable distribution of wealth; in the kneecapping of the U.K. House of Lords; and in various other remarkable and unexpected leftward lurches prior to the outbreak of WWI.

Piketty’s effort to illuminate these trends marks a move in his thinking away from attributing the mid-20th century’s golden three decades of equity entirely to catastrophes that we would not want repeated. Now he favours the idea of a set of historical “switch points” in the political economy that were grounded in ideology — ideologies subject to democratic pressures and control. In other words, it didn’t take a revolution growing from, or producing, violent upheaval. If true, this signals we are not merely whipsawed by irresistible historic calamities, but, as democratic citizens, can be the authors of what he calls “inequality regimes” that were, and may still be, possible to change. 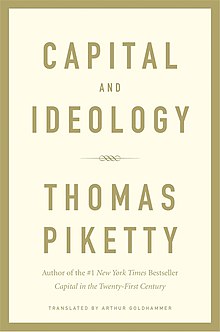 It also marks Piketty as anything but a Marxist, an accusation often levelled at him. He explicitly departs from Marx’s defining principle (and the first line in his Communist Manifesto), to wit: “The history of all hitherto existing society is the history of class struggles.” He rejects this mechanically deterministic “all or nothing” view of history as a clash between good (the worker) and evil (the owner) for a view of “history as a struggle of ideologies and a quest for justice.” His position reminds me of the famous Martin Luther King quote “The arc of the moral universe is long, but it bends toward justice" (a quote attributed earlier to the transcendentalist Theodore Parker).

Piketty lays out a very lengthy case for this view, stretching back to the Middle Ages and ideologies which supported “ternary societies” that imposed the rule of the church and nobility over peasant classes. These shifted, after the American and French revolutions, to “proprietarian societies” where the ability to own private property was equated with liberty and self-determination. He rounds the corner with a look at the “New Deal and Social Democratic” period stretching from 1932 to roughly 1980.

He winds up where we are now, living within a hyper-capitalist “neo-proprietarian” global economy. The accumulation and concentration of wealth among the elite is thanks to trade agreements that made money highly mobile while workers remain stuck. Countries race each other to the bottom by lowering corporate and income tax rates to staunch the flow of this vagrant capital into off shore tax havens. Or, in the case of Vancouver, the flow of global wealth into cash boxes in the sky, marketed as equity assets over the internet.

So there you have it. In the present day, inequality rages to an extent that even the victorious captains of the global economy at the Davos conference are alarmed by it and the political maelstrom it has unleashed. They are awaking to the consequences. For example, the populist search for scapegoats, enabling an obvious con man to enflame xenophobia and promise to build walls in order to gain the world’s most powerful position. Albeit, they are likely reminded in quiet Davos hotel rooms that, Trump being a con man, the walls he vows to build are to staunch the flow of workers, not capital.

By now you are probably anxious to hear Piketty’s solution for this messy global social catastrophe. Here is his key recommendation:

Renegotiate trade agreements which force countries to compete with each other for who has the lowest taxes on wealth and income, starving national social systems and increasing financial inequality. The major global players, the EU and U.S. first and foremost, have enough power among them to institute common progressive wealth, corporate and income taxes, and to punish tax havens and countries that are non-compliant.

To those who suggest he is naive, Piketty responds that our global system is so economically and politically unstable that to not act is to court disaster.

He says, and I agree, that there are hopeful signs emanating from the U.S. political landscape. Presidential candidates Bernie Sanders and Elizabeth Warren drew strong support for proposing to elevate the highest marginal tax rate and impose, for the first time, a tax on wealth. They lost the Democratic primary, but they signal a growing embrace by U.S. citizens of major reform targeting the truly predatory winners of the current arrangement: those whose worth expands by holding inflating assets and uses the proceeds to buy more of them. These financiers and their clients deserve our frustration and require reining in, rather than scapegoating the immigrants and regular wage earners who have ratcheted up productivity over past decades while seeing no real rise in earnings.

The prescription for Greater Vancouver

How might this reformist spirit inform our politics and policies at the city scale? What actions, for example, might it prescribe in the Greater Vancouver region which remains seized by a crisis of inequality manifested in the cost of housing?

Well, it’s important to note that we already have a municipal wealth tax. It’s called the property tax and it’s a tax placed not on stock portfolios but on buildings and land. It is not a progressive tax but it could be. Currently, as Piketty points out, the property tax is paid no matter what your level of equity is. A first-time home buyer is charged for the full value of the home even if he or she actually only own a tenth of it with the rest owned by the bank.

Meanwhile those who have the cash to pay in full — and there are many who can in the Vancouver region — pay the same tax as the one mortgaged to the eyeballs. A mansion owner pays the same rate as the owner of a one-room studio. 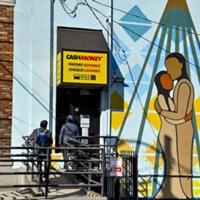 It is time for us to adjust our property tax structure to become more progressive, increasing the percentage charged in proportion to the value of the holding. This would give a break to wage earners just trying to put a roof over their heads while fairly taxing those who are using property as a cash box in the sky. Any additional revenue gained can and should be directed to fund a surge of non-market housing options for city wage earners. And yes, there should be allowances for those whose home value has skyrocketed over the years while earnings have remained low or dropped. No, this is not about forcing low-income seniors out of their beloved family homes.

I have previously written about a taxing strategy to finance non-market housing here, here and here. I am encouraged that such ideas are relevant not just to our local housing problems but are necessary preconditions to rebalancing our local, regional, national and international economies. Hopefully the new post-pandemic world we are hurtling towards will be inviting of the emboldened imagination and politics needed to reverse the engines of inequality that Thomas Piketty has so brilliantly exposed and explained.