The B.C. government has put a moratorium on evictions, banned rent increases and is offering up to $500 a month to help renters affected by the COVID-19 pandemic.

Premier John Horgan said health officials are telling everyone to stay home as much as possible in order to slow the spread of the virus.

“We don’t want people to think they might lose that home as a result of this pandemic,” he said today. Horgan said he had received 17,000 emails in recent weeks about housing concerns.

The payments will be administered through BC Housing and are on top of previously announced aid from the federal and provincial government.

People who qualify for help through the federal Employment Insurance program by showing they’ve been financially affected by COVID-19 will be eligible for the temporary rent supplement, which will be paid directly to their landlords. The aid is scheduled to continue for four months.

The province did not announce aid for people struggling to make mortgage payments, but Horgan expressed hope that financial institutions will see the wisdom of doing what they can to help people through a tough time.

He also said the housing measures complement the $2,000 and $1,000 monthly payments already offered by the federal and provincial governments respectively to people who have lost income due to the pandemic.

Horgan said the province’s plan is based on all 500,000 renting households claiming the temporary rent supplement payments, but that the program can be extended if not everyone makes a claim.

The province also announced that it is freezing rent increases that would have been allowed April 1 and is halting evictions except in cases where there’s a need to protect health and safety or to prevent undue damage to a property, including those where the Residential Tenancy Branch has already issued notices.

It is also giving landlords the ability to restrict access to common areas in buildings, allowing measures like reducing the numbers of people allowed in laundry rooms or closing games rooms, and to bar visitors. Renters will also be able to prevent landlords from entering their units except in exceptional cases. 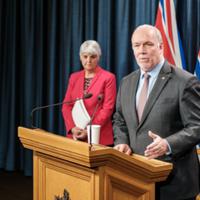 Last week B.C. announced a moratorium on evictions for non-payment of rent from BC Housing-funded residences.

The Angus Reid Institute released results of a new Canada-wide poll today that found layoffs and shutdowns were hitting those least likely to be able to afford it. Some 44 per cent of Canadians reported they or someone in their household had lost hours due to the downturn, the pollster said.

About a third of respondents said their household had already or would soon miss a rent or mortgage payment or have to borrow money. (The survey of 1,664 Canadian adults had a margin of error of plus or minus 2.5 percent 19 times out of 20.)