On a cold Friday in Winnipeg two weeks ago, ten people gathered in a circle outside city hall singing “Happy Birthday.” They were celebrating the one-year anniversary of the city’s first student climate strike.

“We’re all a little burned out,” said Cam Beer, 17, one of the attendees. “We’ve been going at it for a while and some of these things are not sparking joy as they could.”

The Winnipeg group strikes every Friday and meets every Monday to organize. I got to know many of its members when I helped plan the global climate strike on Sept. 27. In writing this piece I spoke with many more youth strikers in other cities. What I heard repeatedly is they are weary, frustrated with the lack of government response. They are pausing this Christmas to regroup and strategize.

But they show no signs of stopping. In fact, it feels like they’re only getting warmed up.

Cricket Guest, 20, an Anishinaabekwe Wiisaakodewikwe land defender and one of the lead coordinators of the Toronto climate strikes, can relate. She said these days she’s mostly angry.

“The feeling of anger stems from a feeling of deep hurt. Myself and other student climate strikers feel deeply hurt people in power are not taking this issue as seriously as we are. If we are able to take the time out of our day, why is it not a priority for the adults who say they care about our future?”

Greta Thunberg expressed similar frustrations recently, when she told the United Nations, “Of course there is no victory, because the only thing we want to see is real action.”

“Youth being tired and angry is a completely legitimate response, and we should all be pissed. We should be outraged,” says Joe Curnow, a professor at the University of Manitoba who studies social movements. “Our elected officials are failing us, and the stakes could not be higher.”

She reminds that the civil rights movement and the anti-apartheid movement took decades to build. “I think one of the mistakes that could get made is for the youth strikers to think that because there hasn’t been meaningful action on climate change in the last year that it’s a failure.”

Curnow referenced the huge turnout of the Sept. 27 Global Climate strike, six million people from some 185 countries. Mass mobilizations of this scale are crucial in building power. During the year the students mounted their strikes across Canada, climate change became one of the top issues for the federal election. Even when governments fail to respond, that can help politicize more people. “Especially white middle-class people who tend to assume governments have their best interest in mind,” noted Curnow.

Emma-Jane Burian, who is 17, said she felt alone in her fears before joining Climate Strike Victoria. “I knew there were problems, but I didn’t know how to go about fixing them. Striking gave me the opportunity to see I can be a part of trying to change things. When we work together we can really do a lot.” Working together included connecting with organizers all across Canada.

Cam Beer, who uses they/them pronouns, said they were struggling emotionally when they first connected with Manitoba Youth for Climate Action. They felt welcomed when, at the first meeting, the group went around the circle saying their names and preferred pronouns. “It was pretty cute,” they said.

Julia Sampson, a 17-year-old from Halifax, said she knew very little about the climate crisis until a year ago. In February, she saw a video of Thunberg striking and decided to help lead similar action in her own city in March.

In addition to organizing the global climate strikes, Sampson and other youth engaged in sit-ins outside the legislative building. They were upset about Nova Scotia’s Bill 213. The bill proposed reducing greenhouse gas emissions to 53 per cent below 2005 levels, by 2030, and eventually net-zero by 2050. Sampson and her allies argued it wasn’t ambitious enough and needed to follow the recommendation of the Ecology Action Centre which advised a 58 per cent reduction by 2030.

For six hours Sampson and other teens joined 40 presenters making their case against Bill 213 to a legislative committee. Daily, youth mounted protests. Still, the bill passed with no amendments.

Sampson hasn’t given up. For her, the strikes “opened up a window for youth to put their frustration and act on their political motivations. A year ago, I wouldn’t be talking about the climate crisis with my friends. Now I think there’s a lot more youth realizing they can get involved in activism.”

Maya Menezes, organizer with No One Is Illegal in Toronto, said the strikes are part of a wider youth awakening. “Youth of colour — Indigenous youth, black youth, especially poor youth — have been mobilizing around these climate calls to action for a long time.”

Though the Fridays for Future movement is predominantly white, she is encouraged by the intersectionality she’s seen. Climate Strike Canada has included Indigenous rights and migrant justice in their list of seven demands. Many of the youth recognize and are naming that the root of the problem is capitalism and colonialism.

“I think one of the biggest wins is that the frame of climate organizing has been blown wide open,” she said. “Young people are changing that conversation and how it’s reaching out across a lot of movement lines is so critical.”

This year Amnesty International awarded its Ambassador of Conscience Award to Greta Thunberg and Fridays for Future, one of many recognitions the group has received. But the real prize remains out of grasp. What’s really needed next to avert climate catastrophe?

Menezes suggests youth strikers partner with unions in ways that disrupt “business as usual” and capture the attention of people in power.

Curnow thinks the student climate strikers could learn a lot from the HIV/AIDS movement in the ’80s and ’90s made urgent as people fell sick and died.

“They had nothing to lose,” she said. “They were willing to lock down anything, and they could turn out in huge numbers.” Curnow’s partner worked in HIV/AIDS organizing in Chicago, where they once went trick-or-treating in the neighbourhood of a pharmaceutical company executive and told all his neighbours about the negative impacts of the guy’s work. They also staged “die-ins” in his front yard.

Climate activists could learn from these tactics. “That might sound really confrontational,” said Curnow, “but honestly that kind of targeting and escalation is really effective in getting people to change what they’re doing.”

Another effective strategy is to support Indigenous-led climate action, the way Pull Together has done by raising funds to wage legal fights against fossil-fuel projects that threaten First Nations sovereignty.

York University professor Lesley Wood notes that as a social movement takes off, the first push tends to be followed by an identity crisis within.

People are tired, some feel the movement has failed. And there is often disagreement about what the next step should be. Some members may want to run for political office, others to become more militant. “This is also the point where the public support for the movement is the highest it’s ever been,” emphasizes Wood. 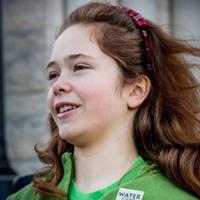 Meet the Teens Suing Canada to Stop a Pipeline

According to Bill Moyers’ Eight Stages of Successful Social Movements, if the movement’s allies can support each other and be strategic in what the next steps are, it will achieve “majority public support.”

Anjali Helferty was a youth climate activist and now is pursuing a PhD, writing a dissertation about settler activists’ efforts to bring Indigenous solidarity into anti-pipeline activism. The climate crisis is incredibly urgent, she points out, yet also so huge it can’t be fixed with quick victories like a few policy changes. That breeds “an ongoing feeling of inadequacy.”

She recommends organizers try to find a “sweet spot” of involvement. Balance high-level work and efforts with a local, winnable focus. Stay connected with older, experienced organizers. Above all, be kind to each other.

Some of her advice is being heeded across Canada, as youth climate strikers pause and regroup. In Halifax, last weekend, instead of meeting, strikers went thrift shopping and out to eat. Winnipeg strikers are doing several self-care and “pleasure activism” workshops this month.

After Christmas, they’ll start to plan the next day of action. It’s set to be sometime in April.