People’s Party of Canada supporters packed into a Surrey Sheraton hotel on Wednesday to cheer, hoot and whistle as leader Maxime Bernier promised to defund the CBC, abolish the Canadian Human Rights Tribunal and pull Canada out of the Paris Agreement on combatting human-triggered climate change.

The business town hall was hosted by the Surrey Board of Trade as part of a series of public events with federal party leaders. Andrew Scheer of the Conservatives, Elizabeth May of the Greens and Jagmeet Singh of the NDP made appearances earlier this year.

Bernier’s young party has faced several controversies in the lead up to its first federal election. Former party supporters and critics of all political stripes worry that xenophobic and even racist members of the radical right, as seen in the U.S. and Europe, now have a political base in Canada with the People’s Party.

Party events have been attended by such far-right figures like Paul Fromm, a white supremacist leader, and Faith Goldy, a former Toronto mayoral candidate and advocate of the conspiracy theory of white genocide, who has harshly criticized immigrants and Islamic culture.

Board of trade CEO Anita Huberman said Bernier was included in the event series because the organization wanted all party leaders to have an “equal opportunity to present their platforms.”

The Tyee asked if there was pushback from Board of Trade members about hosting Bernier.

“I would say a little bit,” said Huberman. “But again, you know, the Surrey Board of Trade has always been a leader in terms of recognizing the importance of bringing all party leaders and the nature of democracy to the forefront. And absolutely, we welcome controversial speakers to Surrey, but it does instigate good dialogue.”

Though the town hall was not an official People’s Party event, the vast majority of the roughly 150 attendees were enthusiastic party supporters who gave Bernier standing ovations.

It was Bernier’s first campaign visit in Western Canada.

About a dozen protesters from a group called Anti-Police Power Surrey rallied outside the hotel, with signs that read “No to Anti-Immigrant Racism” and “Refugees Welcome Here!”

When the event started, the group attempted to enter the closed room where Bernier was speaking. They shouted slogans like “Bernier, go away!” About 10 minutes later, a male protester was escorted off the premises by police. The rest were warned they could be arrested as the hotel was private property, and they eventually left.

Bernier’s 30-minute speech, which repeated his frequent talking points, excited his supporters, who frequently interrupted him with bursts of applause and cries of “Yes!” and “That’s right!”

They were most excited by calls for shrinking the “big, fat government,” such as reducing humanitarian aid, corporate welfare and funding for CBC.

“If they’re so good, [CBC will] be like PBS in the States,” said Bernier. “People will have to pay to access the CBC — we call that freedom of choice and free market.” In fact, the U.S. government-funded Public Broadcasting Service, which is partially funded by voluntary corporate and individual contributions, is free to watch in the United States — and also in areas of Canada where the signal reaches audiences.

Bernier mocked accusations from critics that he or his supporters are racist.

“When people are calling names at us, for me, it’s because they’re weak,” he said. “OK, if I’m a racist, 49 per cent of Canadians are racist [because they] want fewer immigrants.... So I’m not the only one. I must not be the problem.” Bernier pulled the numbers from an Angus Reid Institute study, which he and his party frequently reference.

Despite taking place in Surrey, the event had little Surrey-specific content aside from a question from the Board of Trade’s Huberman about whether a potential Bernier government would help fund Metro Vancouver rapid transit. He said no.

“It’s not fair to tax a person in Quebec and to use his or her taxes to build a local road here in B.C.,” Bernier said, and added asking British Columbians to fund projects in Quebec would also be unfair. “Transportation, local roads are under the jurisdiction of the provincial government.... I’m not running to be the mayor of Surrey. I’m not running to be the premier of B.C.”

Bernier added that he does support using federal money for federal infrastructure projects. If this kind of austerity politics sounds familiar, it’s because Bernier is a big fan of Margaret Thatcher, who he quoted during the event.

In building a new party, Bernier has appealed to libertarians and social conservatives alike.

One explanation for Bernier’s refusal to condemn the white supremacists who have shown up to his events is that he quietly needs their support, according to Sanjay Jeram, a senior lecturer in political science at Simon Fraser University.

If he wants his party to be able to compete with the Conservatives, he “can’t afford alienating people who he might not want part of the bigger message” of the party, Jeram told The Tyee last week.

During the question period following the speech, one audience member called the Canadian Human Rights Tribunal a “kangaroo court.” Bernier said he would do away with it.

“I think we must abolish that one for sure,” he said.

Bernier said his party believes in only one interpretation of hate speech: the one in the Criminal Code. His party platform says, “What some people find politically incorrect, offensive or even hateful cannot serve as the legal basis for discrimination and censorship.”

It references how Motion 103, the non-binding call passed in 2017 by members of the House of Commons for the government to condemn Islamophobia, “appears to be the first step towards restricting our right to criticize some religions.”

In a media scrum following the event, a reporter asked Bernier how he could deny the peer-reviewed research that proves human-triggered climate change.

“I’m not a climate denier, you know,” said Bernier. “The climate is changing, it is a fact. And it will always change. What I’m saying is that right now, there is no climate emergency.... It’s all based on computer information. It’s very difficult to project the planet from a couple of years from now.... We need more study, [but] there’s no urgency on that.”

The Tyee also asked Bernier if any populist movements outside of Canada inspired his party. He said no.

Bernier has, however, compared his use of social media to that of Trump’s, called for a “fence” to stop refugees in Quebec akin to Trump’s wall and used Trump’s term “fake news” during the event after a reporter asked him about the existence of white supremacists in his party.

Bernier has also used positive language about inclusivity and national identity to push his party’s stance on stricter borders, screening immigrants for Canadian values and limiting annual immigration by up to two-thirds. Experts have found that far-right parties in Europe that use this kind of language are the most successful at making themselves palatable to the mainstream.

Journalists covering the event Wednesday were required to give their name and contact information to the Surrey Board of Trade upon entry, which was later double-checked by a campaign co-ordinator from the People’s Party. 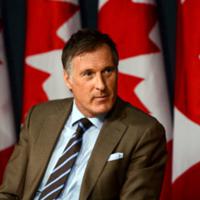 A journalist who questioned the need to sign in was told by a guard from BSL Security, “You’re giving me attitude. Come with me.” She subsequently signed in.

Three party supporters, including its Vancouver South candidate Alain Deng, remained behind the designated table for media covering the speech.

When a Board of Trade staff member told a man in a red jacket who sat directly behind the media table that the area was reserved for press only, he said, “Media? I am a citizen,” and refused to leave.

He asked the reporter sitting in front of him where she worked. Upon hearing that she was from CKNW, he replied, “CKNW? That’s not real media.”

It was a packed Wednesday for Bernier, who spoke to media at Vancouver’s Terminal City Club in the afternoon and ended the day with a party rally at the Hellenic Community of Vancouver.

His next stop on Thursday is Calgary.