BCGEU president Stephanie Smith draws on her experience as an early childhood educator to explain her frustration with the debate over a pay increase that’s only going to unionized workers in the community social services sector.

Smith said the complaints about the selective raises reminded her of the children’s story about the Little Red Hen.

“[She] wanted to bake a loaf of bread and kept asking if anybody wanted to help her do any of those steps to do it,” Smith said. “Everybody said no, but once the bread was baked everybody wanted a slice.”

“The unionized workers in this sector do all the heavy lifting,” she said. “It’s incredibly frustrating to find ourselves having to defend that collectively bargained... wages and benefits should go to union members who bargained them.”

About 32,000 people work in the sector, the majority of them women. They work for agencies that provide child care, home support, addiction treatment, social housing and other services under government contracts.

Everyone in the sector got a two-per-cent raise on April 1.

But the government also provided $40 million for “low wage redress” intended to bring the wages of union members working in community social services closer to those of union members doing comparable work in the health sector.

Not quite half the community social services sector is unionized, so about 17,000 non-unionized workers will end up being paid an estimated 12 per cent less than their unionized counterparts — about $4 an hour.

Smith said union members made the case during bargaining that the redress fund was necessary.

“This is the additional dollars that our members built a business case around that showed how it was impacting their ability to provide quality services to some of the most vulnerable British Columbians, and that there needed to be recognition that we were falling... further and further and further behind comparable jobs in other sectors.”

She said the BC Government and Services Employees’ Union has a simple answer for non-union workers left out of the wage redress program.

“Our answer to those workers is ‘Talk to us. Come learn about the union advantage,’” Smith said, adding the gains are the result of collective bargaining and trying to improve the sector. “If they want to be a part of that, and reap the benefits of that, they are welcome.”

For several days in April the BC Liberal opposition raised the issue in the legislature, accusing the government of treating the non-unionized workers unfairly and trying to force them to unionize.

Opposition House Leader Mary Polak, a BC Liberal MLA from Langley, said there was a longstanding policy to provide funding so that non-union employees in the sector would get the same wage increases that unions negotiated.

“When we were in government, we topped up the non-union employees to match whatever collective agreement increase had been negotiated.”

And Green MLA Adam Olsen, the representative for Saanich North and the Islands, said the government should adopt a “fair wage policy” so that people doing the same work are paid the same amount.

The legislature hasn’t sat the last two weeks, but MLAs return to Victoria today and the topic is likely to be raised again.

The BCGEU represents about two-thirds of the 15,000 workers in the sector who are unionized and was the lead during negotiations.

“I am astonished by the debate, to be perfectly honest,” Smith said. “It’s fascinating for me to hear terms like ‘equal pay for equal work,’ and yet everything that the Liberal administration did from the time it was elected worked against community social service members earning the dollars that they should that’s commensurate to the work that they do.”

After the Liberals came into power in 2001, they undid many of the gains the union had seen, Smith said. 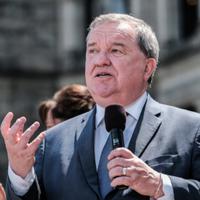 “There was a heavy lobby of the Liberals by CEOs of non-unionized agencies,” she said. “The Liberals then decided to flow through any negotiated wage increases to the non-union sector. That was designed specifically, in my view, to de-unionize the sector and to artificially suppress the wages and benefits.”

She questioned why community social services is treated differently from other sectors, such as health care or education. “If the BCTF negotiate wage increases for BCTF members, that doesn’t then flow through to private schools that are non-unionized,” she said. “Nor does it actually flow through to unionized private schools because we negotiate their collective agreements separately.”

Smith said she’s heard the argument that the government is trying to increase union membership, but she doesn’t accept it.

“I think in fact they are for the first time applying what was bargained in a fair and straightforward manner,” she said. “The fact of the matter is any worker can enjoy union benefits by joining a union. That’s ultimately the way it is and the way it should be in my view.”