For Leslie Spillett, Wahkohtowin isn’t an idea or principle — it’s a way to live.

Wahkohtowin, a Cree teaching about kinship, connectedness, and a responsibility to care for each other and the world, informs every area of her life, says Spillett. Including her work with children and families.

Wahkohtowin translates to “kinship” in Cree. The principle is much broader, extending to an appreciation of the connectedness of all living things and the responsibility to reflect that in the way we live. (Read more about Wahkohtowin in a previous Tyee story.)

Spillett has spent years working with children and families and advocating for a better life for them. She’s been recognized with awards, including an honorary doctorate from the University of Winnipeg.

And Wahkohtowin has come to be an important part of her work. Helping children and families to better lives requires us all to accept our responsibilities to them — the principle underlying Wahkohtowin.

The outlook for children involved with child welfare services is grim. And even grimmer for Indigenous children.

In January 2018, the federal government reported Indigenous children make up 52 per cent of children under 14 in care, despite being only seven per cent of the population.

In Manitoba, where Spillett lives and works, more than 90 per cent of children in care are Indigenous.

Indigenous Services Minister Jane Philpott has said the number of children in government care across Canada is a “humanitarian crisis.”

Spillett says the crisis has been decades in the making.

“We went from residential schools, to a Sixties Scoop... taking children out of their communities based on some Western idea of what good parenting looked like,” Spillett said. “And it’s happening to this day.”

“That’s why I started Ka Ni Kanichihk in the early 2000s, and worked from a paradigm where people didn’t come to us because they needed fixing... and that they came here because we experience common systems of oppression and we could support one another to survive the colonial project,” she said.

The program isn’t just for families with children in care, Spillett notes. It brings people together to engage in a positive and productive way. They can find important emotional support and have their own time and space to explore issues they may need to overcome. There are cooking classes and classes on relationships. But the key is that people are forming alliances with one another.

“I’m talking about safe community people, and supporting a community to help raise children. And not in the absence of the mom,” Spillett said. “Building a relationship, working on creating opportunities for mom to continue to have access, to continue to be involved in that child’s life.”

Spillett clarified that she refers to “moms” most often because that is the demographic she most often sees — single women and their children, involved with child welfare. Men are important in the equation too, she says, but don’t show up in the same numbers as women with children.

Spillett said she uses Wahkohtowin in her work all the time, and as a result the connections she makes are often lasting.

She has been working with one woman for three decades. As a 15-year-old girl, she was being sexually exploited by an older man in return for a place to stay. Other young women were being exploited with her. The case even became public, and made the news.

Spillett still works with the woman, helping her find resources and sometimes just providing empathy. And to her, this is success — though measured somewhat differently than more mainstream standards.

“It’s not a one-off thing... We have had many successes and had many challenges. So, did she become successful in terms of, you know, working full time, owning a house, having a pension? No. Absolutely not. But she survived. She hasn’t become one of those women who has gone missing or been murdered,” said Spillett.

“She’s still a sex worker, but she survived... You know, it’s very complicated. I love her. We have a relationship. But she still struggles every day to survive in this world,” she said.

“We’re in a fucking mess,” said Priscilla Settee, laughing only slightly after her words rang out over the phone.

Settee is a professor of Indigenous studies and women and gender studies at the University of Saskatchewan, and was recently involved in a program called Wahkohtowin. The program brings together gang members and high school students to forge relationships between them so they can learn from each other.

In her work, Settee has seen the “school to prison pipeline” firsthand. This is the pathway disadvantaged kids follow when they go from struggles in school to being in prison later in life. In B.C., children in care are more likely to become involved with the criminal justice system than to graduate from high school.

Settee, who is Cree, said there is a clear link between childhood struggles and later problems. Government agencies that oversee children in care often fail to see the role of basic areas of well-being — adequate nutrition, stable housing and high enough family income — in keeping families together, she added. These are all things that could be addressed before a child is even apprehended. And while it might require additional funding, these are things just too important to ignore, Settee said.

Wahkohtowin highlights the importance of providing supports to everyone who needs them.

“It’s something that creates hope... to remind humanity of the concept of Wahkohtowin, where we are all related. You don’t have to look like me or even be First Nations to recognize that we are family, and that if one suffers in a community, it does impact a whole host of people,” said Settee.

Wahkohtowin in the Senate

Patti LaBoucane-Benson is one of the newest members of the Canadian Senate, appointed in October. LaBoucane-Benson, who is Métis, has spent years working with families, as well as incarcerated individuals, through the Native Counselling Services of Alberta. She has seen the link between child welfare and prisons in her work. And she agrees Wahkohtowin can play a pivotal role in the future of any child in care.

“Statistically, the link is very clear that many Indigenous people who are in jail were either in group homes or foster care when they were younger... If we want to prevent people from being incarcerated, we need to prevent children from going into care,” she said.

LaBoucane-Benson has helped facilitate restorative conferences between families and child welfare bodies — called Family Group Conferencing — when a decision to apprehend a child has been made. This process allows everyone around the child to weigh in about the next step, and it’s based heavily on the idea of Wahkohtowin. 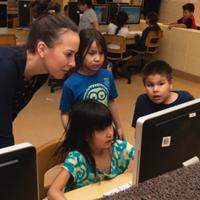 “The way that I see Wahkohtowin in the model for children services would be around holding up kinship relationships as the most important. Of course, ensuring children are raised in safe, healthy environments is paramount, but at the same time it’s also paramount to ensure children are connected to their family, their community, and their culture,” said LaBoucane-Benson.

Valuing the relationship with all of those aspects of a child’s life is Wahkohtowin in action, she said.

And while this type of restorative circle is actually mandated in Alberta, it’s still not done frequently enough, she said.

Asked if she can bring her belief in Wahkohtowin to the Senate, LaBoucane-Benson said, “Certainly.”

"Those are the rules that are going to guide my behaviour, and the way I see my role as a senator. And I think the Senate could benefit from teachings in the way that we interact with each other.”