Eric Hamber Secondary is set to be replaced with a new $80-million facility, the biggest upgrade project in Vancouver history for one of the city’s most seismically at-risk schools.

So why isn’t the community happy about a new school in the South Cambie neighbourhood?

The new building, which will accommodate 1,700 students, will meet strict earthquake standards. But it will be 26 per cent smaller than the current school.

That means no auditorium, a smaller gymnasium and less space for programs like art and music popular with students, parents say.

It’s a seismic trade-off happening in schools all over the city, as the B.C. government has mandated that replacement schools be smaller than their predecessors.

And that has many students and parents upset. And as Hamber’s example shows, there are no easy resolutions.

In a Jan. 7 letter to Education Minister Rob Fleming, Hamber’s parent advisory council said it was “shocked and angered to learn that these essential spaces were not included in the new school design.”

Alumni and parents say that the new design will reduce the quality of education at a school known for its extracurricular activities.

The parents’ council has asked the Vancouver School Board for an estimate of the cost of adding an auditorium and more gym space, but has not yet been given those figures.

Hamber alumni and parents asked the school board at its Jan. 28 meeting to advocate on their behalf, but the board refused to lobby the ministry for a larger school or more funding.

“I think the kids will definitely suffer,” said Stephanie Yada, chair of the council. “And I think especially these days, [students] should be given as many opportunities as possible, because it’s so difficult to figure out what you want to do and hard to keep them engaged and interested.”

Construction on the replacement school, which will be built on the site of the existing track and field, is slated to start in 2020 and be finished by the start of the 2022 school year.

An online petition asking the school board to reconsider its design has garnered almost 5,000 signatures.

Eric Hamber Secondary is part of a bigger story — the question of whether it’s best to renovate or replace unsafe schools.

The 57-year-old school is one of 176 in B.C. deemed “high-risk” in the event of an earthquake. The province originally planned to make all these schools seismically safe by 2020, but the deadline was later pushed to 2030.

With only 11 years left, school boards are increasingly opting to replace rather than renovate. Replacement is cheaper and avoids the problem of the school being disrupted by construction.

On the North Shore, 57-year-old Handsworth Secondary, also on the high-risk list, was initially approved for a $42.5-million renovation under the BC Liberal government.

But parents argued that renovation wouldn’t fix all the aging school’s problems and would disrupt education for years. After the pushback, a $62.3-million replacement — which includes a new theatre, three connected gyms and other upgrades — was approved in January 2018. Construction is expected to begin this summer.

But the money doesn’t cover full replacement. While the province will cover the cost of a new grass field, the community has been told that building a replacement track will require external funding.

Handsworth’s current track serves as a community hub, and the school hosts track and field events for elementary and high schools across the district.

“I think what we forget in North Van, because we’re in a certainly wealthy area, is that track and field is something that’s affordable for everybody,” said Janet Carswell, chair of the Handsworth parents’ advisory council.

The design includes space for a replacement track — the money just isn’t there. That means parents, alumni and community members are on the hook for raising the money. Carswell estimates the cost could be $3 to $6 million.

“We need the district to kick in a lot of money,” said Carswell. “Because there’s no way that they can think that the community can raise [that].” She noted that shifting the cost burden to parents and alumni can be even tougher for schools in less affluent areas.

Parents have already footed costs not covered by the province. When Vancouver Technical Secondary was upgraded, it fell to parents to raise money for the auditorium interior. The same thing happened when Magee Secondary was rebuilt.

But Hamber’s rebuild presents unique challenges. Under the education ministry’s area standards document, which was drafted under the Liberals in 2004, all new replacement schools must be considerably smaller in area and capacity than their predecessors, which has forced the school board to make tough choices about which spaces to include.

And because of Hamber’s poor foundations, a successful renovation is next to impossible.

“Many schools in Vancouver are around 100 years old or more, many of them built right after the war using really substandard materials,” said former school board trustee Patti Bacchus, who has criticized the plans for Hamber’s redesign.

“Often the engineers go in and say, ‘Man, this is just such a big mess. Just build a new one over there on the play field and then demolish this thing.’”

Under the area standards, the size of a school is strictly tied to enrolment, meaning new secondary schools are smaller than their predecessors — and the smallest in Canada, according to the Parent Advocacy Network for Public Education.

In a statement, an education ministry spokesperson noted that districts are not bound to follow the area standards verbatim. But the standards do determine the budget for a project, which gives boards little flexibility.

“The reality is, it’s really money-driven,” said Bacchus. “The government will say, ‘We’ll give you $79 million’ — beyond that, they don’t really care how you spend it — but it’s not really enough.”

The VSB has raised concerns about the area standards before. In a November 2018 letter, then-chair Janet Fraser, who represents Hamber on the board, wrote to the ministry urging that the standards be revised, arguing that the “smaller school buildings do not provide optimal space for the delivery of educational programming.”

The letter raised concerns around the potential shortage of auditorium, gym and arts spaces.

In Hamber’s case, the size of the school under the province’s standards won’t allow an auditorium space, because the new school will be 5,000 square feet smaller. And as long as the existing school stands, there won’t be any substantial field space.

That could be up to 10 years. The existing school has been designated as a “swing space” to house students displaced during their own schools’ seismic renovations.

“Generally, the students and staff need to be out of the school during [an] upgrading,” said VSB deputy superintendent David Nelson. “That’s what a swing site is — a place to put a school community.”

That means the existing school will be left standing for as long as a decade after its replacement is built — and will continue to house students, even though it’s one of the most seismically unsafe schools in the city.

Bacchus said the pressure to find “swing space” is adding to the problems with the Hamber replacement.

Few other schools fit the bill. Hamber is central, located near transit and, most importantly, is big enough to accommodate the population of other high schools in need of repair, like Killarney Secondary.

“One of our challenges in Vancouver, with big schools such as Hamber, is where you put 1,700 students and another couple hundred staff during an upgrade,” said Nelson. “There just aren’t a lot of places where they could go.” 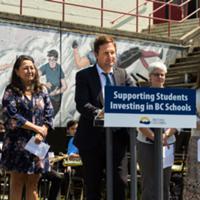 In a June press release, the education ministry said that using Hamber as a swing space instead of renting temporary units while other schools were renovated would save $16 million.

While the current building is used as swing space, students at both the old and new buildings will have to share half the outdoor space, with no track.

“There are so many opportunities for kids to participate that will not be there if you have to compete for gym space and outside space,” said Claire Lloyd, a former physical education teacher who worked at Hamber for 32 years.

“I’m really disappointed that Hamber will be out here carrying the burden for the whole of Vancouver, for 18 schools, to be the swing space of the better part of 10, 12, possibly 15 years,” she continued. “And that’s if everything goes to plan.”

The school’s alumni are lobbying the board to hold off replacing the school until the area standards document is revised and a new design is drawn up. But with an earthquake possible any day, safety may come first.

“There’ll be inconveniences, but I think you’ve got to weigh it against the benefit of staff and student safety,” said Nelson.