There’s no question that Vancouver’s Green Party made big gains in this year’s civic election. The party ran 10 candidates for city council, parks board and school board and elected nine of them. Re-elected city councillor Adriane Carr got more votes — 69,730 in total — of any council candidate. New mayor-elect Kennedy Stewart, for perspective, received 49,705 votes. With council split now between five right-leaning NPA councillors and five progressives, the three Greens in the progressive camp have a greater opportunity than ever before to influence the city’s agenda.

What the party stands for, especially on issues besides the environment, has not always been so clear to some observers. As a city councillor, Carr attacked Vision’s ties to developers but voted in favour of about two-thirds of the housing units debated during public hearings. New councillor Pete Fry campaigned against developer money in politics while supporting policies — like reduced permit and inspection times — advocated by centre-right candidates such as Hector Bremner. And new councillor Michael Wiebe is a small business owner who previously did one term on Vancouver’s Park Board.

“The Green Party is particularly perplexing for a lot of people,” argued Globe and Mail reporter Frances Bula the day before the election. “The Greens are a key factor in this election... but it’s hard to figure out what the party’s housing position is.”

Over the past week I spoke with Carr and Fry about the core values and policies behind their political outlook, and how that might affect the direction of Vancouver. I also reached out to a prominent pollster and spoke with an SFU political science adjunct professor who’s spent years studying the Green Party. “Greens are working within a different set of values,” Cara Camcastle, the adjunct professor, told me. “[They] take a longer-term perspective that is willing to not only put short-term economic benefits first.”

Confusion about where Greens stand on issues such as housing is partly due to people associating the party with the environment. That brand may have been a factor in why Greens did so well in the civic election. Though the campaign was dominated by housing affordability, thick smoke from out-of-control forest fires covered Vancouver in August, the bitter stand-off between B.C. and Alberta over Kinder Morgan’s oil pipeline was national news heading into September, and the IPCC released a terrifying climate change report just weeks before election day.

“I can’t tell you how many people came up to me to say I’m voting Green because of climate change,” Carr said. “It was kind of a sleeper issue. It wasn’t out there in [election] media. It wasn’t talked about in all-candidates meetings very much.”

Carr told me that she thinks her popularity is also due to local factors. During her previous two terms on city council she frequently attacked the Vision-dominated city hall for being too close to large developers. “Peoples’ desires for the city they want are regularly quashed while developers’ dreams to build higher and bigger prevail,” Carr argued in a 2014 Vancouver Province op-ed. Green Party candidates in this election refused to accept money from developers. Carr argued that some people saw her as uncompromised: “I think that played strongly in many voters’ minds.”

I asked Research Co. president Mario Canseco what he believes caused the Green Party’s civic gains. “It’s a combination of factors,” he wrote in an email. “We have seen B.C. and Quebec consistently outrank all other areas of the country on concerns about climate change, so that definitely plays a role.” Canseco went on, “I also think the party brand helped.... With a long ballot and voters who did not bring a list to the polling station, the progressive voter who was looking for a party name gravitated away from Vision Vancouver and first to the Greens, and then to COPE and OneCity.”

The Greens are undoubtedly a progressive party. Earlier this spring, when COPE helped organize a meeting of left-wing parties and candidates in the basement of Vancouver’s Russian Hall, Vision wasn’t invited, but the Green Party was. “The fact that we were invited speaks volumes,” argued Fry, who attended the meeting on behalf of his party. “They wanted us there because of our shared values.” He said that the Greens and COPE (as well as OneCity) share more in common than they disagree on: “We’re very grassrootsy parties, we are both very earnest about our social justice and COPE’s got a pretty strong position on environmental justice.”

Where the Greens and COPE really differ is in their emphasis on class. Recently elected COPE councillor Jean Swanson calls for a “rent freeze” and a “mansion tax” whose proceeds would pay for social housing. “If anything can put fear into the hearts and minds of Vancouver’s most wealthy, this is it,” argued BC Business in June. Nobody is making statements like that about the Greens. Fry told me that despite his critiques of corporate influence at city hall, he sees developers as vital for fixing unaffordability. He thinks some COPE policies are counterproductive.

“A lot of developers we talk to caution that a rent freeze would put a chill on the market and then we’d never get any purpose-built rental and we’d be in worse shape,” Fry argued, continuing that, “unfortunately we do live in a free market system.... We need to be firmer with developers but we still need them to build.”

The Greens are in a delicate political position. The party could lose progressive support if it comes to be seen as too accommodating to developers. Yet it’s also branded itself as a party of non-ideological problem-solvers. So far it seems to be achieving that balance. When the Green Party released its housing platform in September — which sets a goal of 50 per cent of new housing to be sold below market rates while making the building approvals process faster — it won support from a range of voices. Vancouver architect and real estate consultant Michael Geller said “in general I endorse the strategies and actions being proposed,” while Patrick Condon, a UBC professor who at one point considered a run for mayor with COPE, argued that it was “an excellent plan to address some of the problems we face.”

On other issues they’ve shown less willingness to compromise with business. Carr has been an outspoken critic of the Kinder Morgan pipeline. And federal Green Party leader Elizabeth May was earlier this year arrested for protesting the project — as were newly elected COPE councillor Swanson and new Vancouver mayor-elect Stewart. 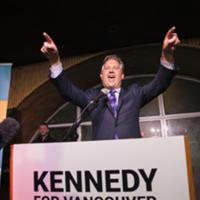 Carr is also part of an ongoing discussion at city hall about the feasibility of suing major oil and gas producers for their role in causing climate change — an initiative supported by OneCity councillor Christine Boyle and taken up recently by U.S. cities such as San Francisco, Oakland and New York. “There may well be a class action [lawsuit] that includes a number of cities,” Carr said. “I think that would be smart.”

Yet on the more immediate issues facing Vancouver, it’s not always easy to predict how Greens will act. The Globe and Mail’s Bula pointed out that though Carr voted against some Vision-supported developments, the Green councillor was in favour of the majority of those projects: “[Carr] did vote for two out of three units. So what was different there, any observer has to ask him/her/themself. Was the process better? Was there not a problem with the affordability rules, even though they are the same for all the projects? Or was it that some unhappy residents showed up on some projects, but not on others, so she sided with them when they did appear.”

Camcastle says it’s difficult to pinpoint where exactly the Greens fit in today’s political landscape. But to her that’s what makes the party interesting. “[They] are looking at alternative approaches to politics and saying they want to define a new way.” In a broad sense that means taking a wider view of our economy and society than traditional politicians. Greens focus on how “cities can operate to provide a good environment for their people as well as other living things,” she said. When I suggested I was still having trouble defining what, exactly, a Green is, Camcastle chuckled. “Well I’m still researching,” she said. “There’s a lot there going on.”