A lawyer for some of the people affected by the B.C. health ministry firings six years ago says his clients are “disappointed and frustrated” to have been waiting more than three months for compensation payments anticipated from the government.

“Our clients have been at the centre of this horrible fiasco since September 2012,” Gary Caroline said in an email. “They are eager to put this ordeal behind them.”

In 2012 the health ministry fired six employees directly and a seventh believed himself to have been constructively dismissed due to the employer’s actions. It also cancelled or suspended several research contracts.

The firings resulted in five wrongful dismissal and defamation lawsuits that were settled out of court, a union grievance process, some of the employees returning to work, and two major investigations.

One of the fired employees, Roderick MacIsaac, committed suicide.

In April 2017, the B.C. Ombudsperson’s office released a report on the firings titled “Misfire: The 2012 Ministry of Health Employment Terminations and Related Matters.” The report confirmed that the firings were unjustified and should never have happened.

The provincial government hired a retired judge, Thomas Cromwell, to oversee the implementation of the Ombudsperson’s recommendations, including revisiting the grievance settlements that had been made with some of the former employees.

“They are understandably disappointed and frustrated by what they see as undue delay in the processing of Justice Cromwell’s recommendations,” Caroline said.

“That said, they remain grateful for Justice Cromwell’s considerable efforts and hopeful that Government will do what it takes to get this wrapped up quickly.” 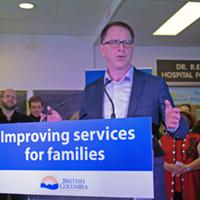 Caroline said the government received Cromwell’s recommendations regarding his firm’s clients and other fired researchers in early June.

“We’ve recently been informed, however, that Government does not intend to process the recommendations concerning our clients until it receives the recommendations from Justice Cromwell for all those claiming payments in connection with the Ministry of Health’s firings and contract terminations,” he said. “We have no idea how many people this involves.”

An emailed background statement from the finance ministry said the province is committed to addressing all of the recommendations from [the Ombudsperson’s] report, but confirmed it is waiting while Cromwell works to identify all of the people he believes should be considered for compensation from the government.

“This is a rigorous process that places justice, fairness and equitable compensation at the forefront,” the statement said. “For this reason, settling on payment amounts cannot be treated on a first-come-first-serve basis.”

A spokesperson for Ombudsperson Jay Chalke’s office said he is planning to release an update on the health firings in the next few weeks and declined to comment in the meantime.