Protesters arrested for disobeying a court injunction that enforced a five-metre exclusion zone around the Kinder Morgan facility in Burnaby were back in court last week learning the consequences for their civil disobedience.

The permanent injunction was granted on March 15 to keep protesters away from Kinder Morgan’s terminal gate. Kinder Morgan has been granted permission to expand its pipeline from Alberta to the B.C. coast with a resulting increase in oil tanker traffic in coastal waters. Thousands of protesters have marched on the Kinder Morgan site, and hundreds have been arrested.

Many of those arrested were not aware that they would be facing criminal contempt of court charges.

“I was a little taken aback,” said Violet Williams, an 18-year-old student in child and youth care at the University of Victoria.

“I was just like, oh, well we are peaceful, we've done nothing really to break the law to label us as criminals,” she said.

For Williams, the prospect of going to court was daunting. At her first appearance in B.C. Supreme Court last month, she realized how serious the consequences of her actions might become.

“It was really scary for me, because I'd literally never been in a courtroom. I was like wow, this is real, this is happening, to walk in and see the bright red floors and the lawyers having to be in their robes,” Williams said.

“How could this become so much for a fight for our land and water?” she said.

Williams had travelled alone to the Kinder Morgan facility in Burnaby from where she lives on Vancouver Island. She had one week free between the end of her classes and the start of her exams and decided to seize the moment.

Williams went to the camp on Burnaby Mountain a few times before she made the decision to go to the gate and break the injunction. But when she was there, her confidence bolstered by the support of other protesters, she felt she had done the right thing.

“Since there were only three women being arrested, they sang the women's warrior song for us which was really touching to my soul because I lost my mother when I was two,” said Williams, whose mother was from Kwakwaka’wakw First Nation.

“I wanted to make sure that we could have clean water and clean land for my children to be able to grow up on and be able to swim in the ocean and fish, eat the fish from the ocean, be able to do their own clam-digging.”

Ian Angus, a professor at Simon Fraser University and another protester arrested for breaking the injunction, was allowed to make a statement to the court after he had pled guilty.

He used the statement to explain his actions to the court and to request an altered fine from $500 to $1.

“The fact of a fine would be an acknowledgement that I broke the law in disobeying the injunction,” Angus said in his prepared statement.

“Its amount would be an acknowledgement that my reasons for doing so mean that the act amounts to the exercise of a civic, human and natural responsibility,” he said.

Justice Kenneth Affleck did not grant Angus his request.

“When I finished the judge just kind of scowled at me, actually, and said ‘$500’ and that was that,” Angus said.

Angus said that he had asked the judge two weeks prior to Monday’s sentencing whether he was able to make a statement. Affleck replied that he would be able to explain the context of his actions. Angus, along with many others of those arrested, presumed that freedom would apply to everybody pleading guilty.

However, on Tuesday Affleck said that he would not listen to any more statements of this kind, according to Angus and others present in court.

“So now people who plead guilty are being denied even a minimal opportunity to explain their reasons,” said Angus, who attended Wednesday’s proceedings in support of others awaiting sentencing.

“In other words, he's treating them like billiard balls on a billiard table and not as human beings with reasons and minds,” Angus said.

Criminal Code section 726 states that “before determining the sentence to be imposed, the court shall ask whether the offender, if present, has anything to say.”

But because criminal contempt proceedings do not fall under the Criminal Code, they do no necessarily follow Criminal Code procedures.

Ceric said that it is unusual to have a judge say that he doesn’t want to hear statements on sentencing. “It’s understood that that’s the defendant’s time to make a statement,” she said. “I don’t think the fact that it’s [criminal] contempt changes that.”

Affleck said he wanted to keep the statements limited to personal circumstances as to whether the defendants could pay the fine or complete the community service, according to Angus and others present. 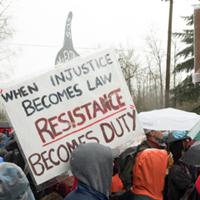 Romilly Cavanaugh, a former employee of Kinder Morgan who was also arrested for violating the injunction, said that she was surprised by the judge’s decision. She said she understood the judge’s perspective “but I was really quite taken aback that he didn't even give people the opportunity to even speak for a couple of minutes about the reason that they were there.”

“There was a lot of disappointment in the court over that and some people were really quite upset,” said Cavanaugh who has not yet entered her plea but went in support of others who were pleading guilty.

Cavanaugh said that some people also wanted to thank the judge, lawyers and sheriffs for their work. Others wanted to apologize and a chance to explain that it wasn’t their intention to offend the courts.

“Because people who were there for the most part have never been arrested before, they're law abiding citizens,” Cavanaugh said. “They don't want to be breaking the law, but they felt they had no other option, so there are people who wanted to apologize for that.”

Protesters continue to be arrested at the gate of the Kinder Morgan facility.