Making a conscious decision to risk arrest was not an easy choice for Atiya Jaffar.

Jaffar, a digital campaigner with 350.org, was one of more than 200 people who have been arrested for disobeying a court injunction that placed a five-metre exclusion zone around Kinder Morgan’s terminal on Burnaby Mountain.

“Most of the people that were there with me had never done anything arrestable before. We were sharing those nerves together,” said Jaffar, who was arrested March 20 while protesting the Kinder Morgan pipeline expansion.

Kinder Morgan is expanding a pipeline that would triple the amount of oil transported from Alberta through B.C. and would expand tanker traffic in the province’s coastal waters. While supported by some, the project has been met by high levels of resistance, including thousands who participated in a march organized by Indigenous leaders March 10.

Jaffar’s arrest was her first, and she said risking arrest was not a decision she took lightly.

“But for me it was so clear that politicians were not leading the way in actually addressing one of the most pressing issues that this country is facing right now,” Jaffar said. “So we took bold action to lead the way on climate action, but also to stand in solidarity with Indigenous communities.”

Many of those arrested were not aware of the legal consequences of their actions. Jaffar is one of the many arrested now facing criminal charges for breaking the injunction. Jaffar said that she, along with many others, had assumed that they would be charged with civil contempt of court.

“It’s a huge risk that we were not prepared for,” Jaffar said.

B.C. Supreme Court Justice Kenneth Affleck, who granted the injunction to keep protesters away from Kinder Morgan’s site, recommended April 9 that the “public nature of the breaches warranted criminal sanction.” B.C.’s Prosecution Service assumed conduct of proceedings and released a statement saying criminal proceedings were warranted for those who have been arrested for breaking the injunction.

Dylan Mazur, a community lawyer for B.C. Civil Liberties Association, said proceedings starting as civil contempt transform into criminal contempt cases. The difference between the two, he said, lies in the public interest of administration of justice.

“Once we get into the criminal realm, basically the key piece is the intent part,” Mazur said. “Did they have the knowledge of or the intent to publicly disobey the court order? If it’s going to be criminal contempt of court, the burden is on the Crown to prove this using the criminal standard of beyond reasonable doubt.”

Jaffar said it was not her intention to disrespect the courts that granted Kinder Morgan the injunction against preventing access to its facility.

“Our battle is with Kinder Morgan, not the courts,” she said.

Criminal contempt of court is unique in Canadian law. It is the only offence in Canada that is not part of the Criminal Code and lies under common law, which is based on case precedents which Mazur says date back to 12th century England. The precedent that the Kinder Morgan cases set could have implications for similar cases in the future.

But Mazur says there are already precedents for handling criminal contempt and protesters.

Twenty-five years ago this summer, more than 1,000 people were arrested for protesting forest clearances at Clayoquot Sound in what became known as the “war in the woods.” Of those arrested, more than 800 were convicted of criminal contempt of court, receiving fines that ranged from $250 to $3000 and custodial sentences of up to 45 days. However, in one case where a group of six people appealed, no fines were imposed and some sentences were reduced depending on whether the accused pled guilty or not guilty.

Tom Sandborn, another protester arrested in March, said that the Kinder Morgan protests could be thought of as an anniversary event in honour of the 1990s Clayoquot Sound protests.

This was not his first arrest. Sandborn also participated in the civil rights movement in the U.S. in the 1960s.

“I decided it was time to dust off my civil disobedience clothes and get back to work,” said Sandborn, a freelance journalist who has written for The Tyee.

Sandborn was aware that civil contempt of court proceedings had the potential to transform into criminal contempt. But he said that he would not deny the facts of his actions.

“Yes, we were chained to the fence,” Sandborn said. “Yes, we were told by the nice policeman that it was against the law. Yes, he gave us opportunity to repent our wicked ways and get up and leave, and we stubbornly refused.”

He added: “We did publicly defy the learned judge’s injunction. We would say out of commitment to a higher one, in order to help prevent a bigger crime.”

Being arrested, Sanborn said, was part of the package of civil disobedience.

“You’re willing to take a hit in order to wake people up and stand in solidarity with other people.”

David Mivasair, who was named in the injunction, did not try to get arrested and believes it’s not the most effective tactic.

“I don’t want to get arrested,” said Mivasair, an activist and rabbi who before the injunction was issued had with other activists successfully stopped Kinder Morgan’s construction trucks. “Why should I get arrested? It’s a total waste of time. Why should I have to spend my time in court?” 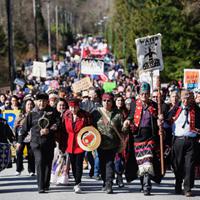 Arrests to Continue as Kinder Morgan Protests Heat Up

“I think the most effective thing any of us can do right now is to support the political actors,” he said.

Sandborn and Jaffar acknowledge that being arrested is not the only way to stop Kinder Morgan, but both see it as a means to get the issue in the public domain. Jaffar says the protesters are winning the war for public opinion and the moral high ground.

Would the threat of a possible criminal conviction deter future protests?

Grand Chief Stewart Phillip of the Union of B.C. Indian Chiefs says no. “Generally speaking, people are deeply committed to continue their opposition, no matter what the costs or consequences,” he said. “They believe that the land, the water, the air are worth fighting for. And will continue to do so.”

Sandborn agreed. “I don’t imagine running out of people who are willing to go to the gate and stop this,” he said.

Sandborn’s voice filled with emotion when asked if he would consider arrest again.

This story has been corrected since it was first published.