A virus known to affect farmed Atlantic salmon may cause jaundice and anemia in Chinook salmon, according to research released today by the Strategic Salmon Health Initiative (SSHI).

The revelation is reported in a peer-reviewed paper co-authored by Kristi Miller, a DFO scientist, and other researchers that will be published next month by the Canadian scientific journal FACETS.

“These findings add to the existing concerns about the potential impacts of open net salmon farming on wild Pacific salmon off the coast of B.C.,” says Brian Riddell, CEO of the Pacific Salmon Foundation, which is one of three partner organizations in SSHI, along with Genome BC and Fisheries and Oceans Canada (DFO).

The same strain of piscine orthoreovirus (PRV-1) that is known to cause Heart and Skeletal Muscular Inflammation (HSMI) in farmed Atlantic salmon — discovered in B.C. salmon farms by the same SSHI research team in 2016 — is now being associated with a disease called jaundice/anemia in Chinook salmon.

The disease causes red blood cells to break down and overwhelm the liver with toxic levels of hemoglobin, resulting in damage to both the liver and kidneys, while at the same time producing a yellow discolouration in the fish.

The study suggests that the virus — also referred to as piscine reovirus — affects the blood of Chinook differently than it does Atlantic salmon, causing cellular death as opposed to tissue inflammation.

Chinook salmon are an important food source for B.C.’s endangered southern resident orcas, whose populations have been in serious decline.

“We know that we have PRV here in B.C.,” Emiliano Di Cicco, one of the new paper’s authors, told me by phone last week. “We demonstrated last year that the PRV we have here also causes HSMI. But we never knew if it was a problem for Pacific salmon. With our new study, we were able to show that the same virus that is in Atlantic salmon can also affect Pacific salmon and is involved with the development of jaundice/anemia.”

Researchers studied samples collected by DFO’s fish health audit and surveillance program between 2011 and 2013. The program randomly selected 15 to 30 farms (out of B.C.’s roughly 100 operational open net pen sites) per quarter, taking up to 10 fish per farm. SSHI was supplied with tissue samples from 672 farmed Atlantic salmon and 210 farmed Chinook for its study. They chose to study farmed Chinook because diseased wild fish often die, making them hard to find and analyze.

The samples they studied showed a high prevalence of PRV among these farmed fish, with 65 to 75 per cent of both Atlantic and Chinook salmon carrying the virus and a quarter of them having a “high viral PRV load.”

Piscine reovirus is at the centre of a legal battle over the aquaculture industry’s placing of PRV-infected land-raised smolts into its ocean pens, a violation of Section 56 of the Fishery (General) Regulations.

In 2015, Federal Court Justice Donald Rennie ordered the DFO to begin testing hatchery fish and not allow them to be transferred to the ocean if they are found to be carrying PRV.

Norwegian-owned Marine Harvest, the largest open net pen operator in BC, argued in an affidavit to the court that such restrictions would “severely impact” the company.

DFO has thus far flouted the order, prompting a follow-up suit by Alexandra Morton and Ecojustice that is currently being heard.

Rennie concluded “The evidence suggests that the disease agent (PRV) may be harmful to the protection and conservation of fish, and therefore a lack of full scientific certainty should not be used [as] a reason for postponing measures to prevent environmental degradation.”

The new science adds to concerns.

Di Cicco said “Knowing the high prevalence of PRV in Atlantic salmon in B.C., and that the same virus is intimately involved in the development of both HSMI and jaundice/anemia, this suggests that migratory Chinook might be at more than a minimal risk of disease from exposure to high levels of PRV occurring in salmon farms.”

The 2012 Cohen Commission report on the state of salmon stocks in B.C. recommended that even a “minimal risk of serious harm to migrating salmon” should lead to the removal of fish farms.

Strategic Salmon Health Initiative research has also found that once a farm is infected with PRV, the virus can linger. In a 2017 study on PRV and HSMI, researchers found that when smolts — young salmon —known to be PRV-free were used to populate Cermaq’s empty Venture Point farm in Okisollo Channel, they still became infected with PRV, indicating the virus survived in the waters around the farm after the previous batch of mature fish was harvested. The research confirmed the findings of a 2012 study published in the journal Diseases of Aquatic Organisms. 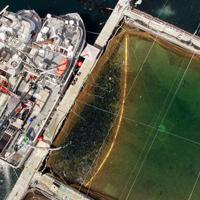 Chinook stocks are collapsing in key areas of the west coast of Vancouver Island, where they are especially at risk from diseases emanating from fish farms. When Chinook smolts migrate from their natal rivers to the ocean, they typically spend their first year in sheltered inlets.

The new study notes the risk of disease transfer. “Overall PRV is not prevalent in wild fish, but a high prevalence of PRV is observed in the fall, especially in Chinook on the west coast of Vancouver Island that remain resident in the same bays and inlets occupied by salmon farms for prolonged periods of time.”

The release of these findings puts added pressure on the provincial government, as it considers whether to renew dozens of ocean tenures for salmon farms in the Broughton Archipelago which expire June 20.

The next stage of SSHI’s ongoing research will attempt to find PRV and jaundice/anemia in wild fish.