In a scathing report, federal Environment Commissioner Julie Gelfand found that, "Fisheries and Oceans Canada did not adequately manage the risks associated with salmon aquaculture consistent with its mandate to protect wild fish."

Although the department had implemented measures to control the spread of infectious diseases and sea lice, "it had not made sufficient progress in completing the risk assessments for key diseases that were required to understand the effects of salmon aquaculture on wild fish," said the report, which was released last week.

"We also found that the department had completed only one of the 10 risk assessments of key diseases that it had committed to completing by 2020 to evaluate the consequences of disease transfer from aquaculture operations to wild fish," the report said.

The DFO had also failed to determine how it would "manage aquaculture in a precautionary manner in the face of scientific uncertainty," the report found.

The audit found a long list of shortcomings in the federal government's regulation of salmon farms.

"Fisheries and Oceans Canada did not conduct adequate analysis to know whether its rules for drug and pesticide deposits at salmon farms would minimize harm to wild fish," the environmental commissioner found.

Multiple chemical treatments at fish farms to control sea lice, for example, "increases the risk of harm to wild fish," said the audit.

And the department was not ensuring the rules that are in place are being followed, the report said. Fisheries and Oceans Canada "did not adequately enforce compliance with aquaculture regulations to protect wild fish," the audit found.

At a press conference following the report's release, Gelfand expressed dismay about the department's performance.

"But of the audits that we have done on how government oversees a particular industry, really I have not been more disturbed than I have been with aquaculture," said Gelfand.

"The gaps, there are so many of them, they are so important," she said. "There's no monitoring of wild fish, no thresholds for the use of medication. Industry reports are not validated, no monitoring of the ocean floor required - it just goes on and on."

"I have probably not been more concerned about an audit that oversees an industry," Gelfand said.

Scientist and industry critic Alex Morton said the commissioner's report vindicated her long and combative campaign to get the department to protect wild fish and uphold the law.

"My reaction was one of enormous relief that someone like Julie Gelfand had the guts to speak frankly about what is going on here," Morton told The Tyee.

"Anyone who speaks up about the gross mismanagement of salmon farms by the province of B.C. and the federal government can expect significant negative impact to their careers and this has placed a chill on the truth."

Gelfand's report accurately recorded the real state of fish farms on the Pacific Coast, she said.

"DFO is not monitoring the state of wild salmon exposed to the salmon farming industry and that is why I have taken up this role, publishing on the impact of sea lice and viruses on wild salmon," said Morton. "But the DFO ignores my work, the courts, First Nations and silences its own scientists."

In one prominent case the federal government prevented fisheries scientist Kristi Miller from discussing a study that looked at the role viruses played in the collapse of the Fraser River sockeye run in 2011.

Morton and the 'Namgis Nation are suing Fisheries and Oceans Canada, claiming it is breaking the law by not testing farmed salmon for piscine reovirus (PRV) before allowing them to be placed in net pens in the sea. Norwegian-based Marine Harvest and Japanese-based Cermaq have joined the federal government in fighting the lawsuit.

The lawsuit is based on a 2015 Federal Court ruling that found the department wrongly delegated responsibility for deciding whether to release infected fish to Marine Harvest.

Timothy Kennedy, executive director of the Canadian Aquaculture Industry Alliance, said the industry "will continue to review the Environment Commissioner's report, but in general we support smart regulatory proposals that are based in robust science, clarify regulator roles and responsibilities, achieve sustainable growth, and protect wild salmon populations and the environment."

In 2010 the federal government took over the responsibility for regulating the 30-year-old salmon aquaculture industry on both coasts from the provinces. 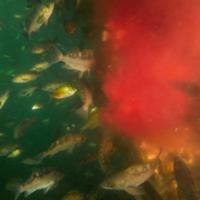 Around the world Atlantic salmon fish farms have been the centre of controversies due to disease outbreaks, the spread of viruses, sea lice infestations along key migration routes for wild fish, the violation of First Nation treaty rights and massive escapes of farmed fish.

As a result, some jurisdictions are tightening regulations and forcing the industry to move from open nets in the ocean to closed containment technologies on land.

The state of Maine will become the home of two large closed containment salmon projects.

The 2012 Cohen Commission report on the state of salmon stocks in B.C. recommended that fish farms should be prohibited if research shows a "minimal risk of serious harm to migrating salmon."