Organizers of the recent wave of protests at the Kinder Morgan site on Burnaby Mountain say we can expect more large protests and arrests as the battle shifts up and down the intended pipeline expansion route this year.

Police have arrested 176 people so far at the Burnaby Mountain site since March 10, according to Eugene Kung, a staff lawyer at West Coast Environmental Law.

These are the technical legal grounds that allow for the arrest of protesters at the Burnaby Mountain protests. The question about why people are choosing to get arrested vary from “standing in solidarity for Indigenous rights, having fears of a spill or tank farm fire, and the contribution of climate impacts of this project,” Kung said.

Grand Chief Stewart Phillip, president of the Union of BC Indian Chiefs, said the organization around the ongoing protests is organic and that no central group is spearheading the gatherings.

“On April 7, we’re going to be hosting another large gathering [at the Kinder Morgan Burnaby Mountain site],” Phillip said. “I will be present and I’ll likely be arrested on that day.”

Phillip, who was arrested Nov. 27, 2014 at a protest at the site, said it’s appropriate to demonstrate solidarity with the people who have already been arrested in the past weeks, and that the location of the protests will change.

“There could be a point where the action will shift from Burnaby Mountain to Cold Water,” Phillip said. “Over the next several months, you can expect there to be an ebb and flow with this battle.”

Five years ago, Vancouver filmmaker and photographer Zack Embree set out to understand the impacts of the Kinder Morgan pipeline on local communities and talk to people he says have been ignored by the National Energy Board process.

Embree is one of many people arrested in the recent protests at Burnaby Mountain.

“I think that we’re in a situation where British Columbians realize this is the moment to make their concerns and their voices heard and I think we’re seeing the power in the numbers,” Embree said. “Likely there will be a lot more people who are willing to occupy that injunction zone and break the court order.”

Kinder Morgan is one of the largest infrastructure companies in North America, owning an interest in or operating 136,000 kilometres of pipelines and 152 terminals, according to the company website. The Kinder Morgan pipelines transport natural gas, gasoline, crude oil and carbon dioxide while their terminals store and handle petroleum products and other chemicals. 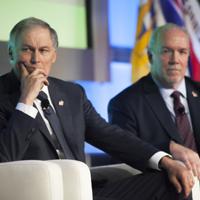 The National Energy Board announced in February that Kinder Morgan can begin construction of its Trans Mountain pipeline expansion at the Burnaby Mountain tunnel entrance, which is subject to federal, provincial and municipal permits. The NEB’s decision lets the Texas-based energy company start clearing and grading work at the entrance to the Burnaby Mountain tunnel on its Westridge Marine Terminal property.

Peter McCartney, a climate campaigner at the Wilderness Committee, said “a lot of times, people see protests and arrests going on and think ‘this isn’t normal,’ and we’re there to provide some context and make sure to lift the voices of the people that are on the ground.”

The Wilderness Committee created a series of maps to track the route of the intended Kinder Morgan Trans Mountain pipeline and associated oil tanker route. You can view the map here for detailed views of the pipeline route as it crosses B.C.

McCartney held an information session at the Burnaby Mountain site last Thursday for a dozen people. He wants to make sure that as the protests unfold that people understand why some are willing to go to such a huge length to break the law to stop the project.

“It’s a disaster for the climate and the coast and a disaster for Indigenous consent,” McCartney said. “We’re making sure that everyone gets that context.”

Indigenous Coast Salish members, spiritual leaders and youth erected a traditional “Watch House,” located at the Burnaby 200 soccer field, as part of their ongoing resistance to the Kinder Morgan project. This traditional structure has been used for thousands of years to watch for enemies on their territories and protect their communities from danger. There are also tents set up on the gravel soccer field adjacent to the Watch House that are being occupied around the clock as part of Protect The Inlet, which is led by Tsleil-Waututh members and supported by a number of environmental groups.