“I found his remarks quite appalling,” Mark said. “He’s got a very large constituency of First Nations in his riding. In a time where we’re trying to advance truth and reconciliation, which our government’s committed to doing, I just thought it was appalling.”

BC Green Party MLA Adam Olsen said, “It’s more than something stupid. It highlights an approach that the former government took that highlights why we’re so far away on reconciliation.”

Morris, who represents Prince George-Mackenzie, made the comments during a legislature speech responding to the provincial budget which included $50 million to preserve Indigenous languages. In his speech he acknowledged that Indigenous languages are important, but questioned the government’s priorities.

“Here we have people suffering every day from alcohol abuse, domestic violence, sexual abuse, and preserving languages is a higher priority than putting that money into extra policing resources,” Morris said. “From a risk management perspective, I think that this really needs to be re-examined.”

Mark said many communities asked for support preserving Indigenous languages and the government is trying to make a difference. “The purpose of residential school was to ‘kill the Indian in the child,’” she said. “Elders are dying. There’s less than 10 members in some of the nations. Communities are trying to hold on and revitalize their language.”

Mark, who is Nisga’a, Gitxsan, Cree, Ojibwa, French and Scottish, said she speaks only a few words of the languages her grandparents spoke. “My grandparents chose not to teach us our language because they were raised to be ashamed of our culture, so they spoke in private, in secret.”

B.C. is home to 60 per cent of the Indigenous languages in Canada, Mark said, adding she’s proud of the funding that will flow through the First Peoples’ Cultural Council, a provincial Crown corporation. “This is massive for the 203 First Nations in B.C.”

Olsen, the MLA for Saanich North and the Islands, said Morris’s remarks were “the most tone deaf” he’d heard in the legislature since being elected last May.

“Clearly Indigenous communities don’t need or want more policing,” said Olsen, a member of the Tsartlip First Nation. “The issues the member brought up are social issues that are a result of an extremely dysfunctional relationship with the government.”

Supporting Indigenous languages was a key recommendation of the Truth and Reconciliation Commission chaired by Murray Sinclair, Olsen said. “One of the main goals of residential schools was to strip language from Indian kids, Indigenous kids. The reason they wanted to do that was because they recognized that separating the language from the child, separates them from their culture. It’s a critical piece to the cultural genocide that this now senator, former justice, talks about.” 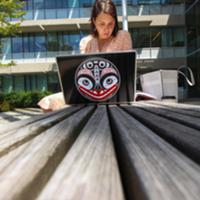 For This Haida Speaker, a Call to Learn and a Call to Teach

The investment in Indigenous languages is a big step towards reconciliation, Olsen said. “It goes right back to the very beginning of where it all started,” he said. “It’s really exciting. This government should be commended for understanding this is a key piece to starting in this.”

Olsen said he speaks some SENĆOŦEN but is not fluent. “My grandfather was a fluent speaker. His cousin, my great uncle was a fluent speaker,” he said. “These guys went through the residential school. They basically got the language all but beaten from them. I’ll speak for my grandfather, alcoholism was a massive issue in his family. And somehow, someway he went to the University of Victoria and said ‘we’ve got to preserve this.’”

Olsen said that his own daughter went to a pre-school that included SENĆOŦEN immersion and next year will have immersion in the language in Grade 1.

Morris was unavailable for an interview Tuesday.

“I think he should withdraw his remarks in the chambers,” Mark said. “I think it speaks to where he thinks the investment should be and the difference in ideology with our government around investing in the Truth and Reconciliation calls to action.”