Despite a recent rate increase, people receiving welfare still struggle to pay for food as other expenses rise, says a group advocating for higher assistance payments. The minister responsible for reducing poverty in B.C. agrees.

“Even with a $100 raise to welfare rates, to $710 for a single person, it still falls hugely below the poverty line,” organizer Kell Gerlings wrote in an email announcing this year’s Welfare Food Challenge.

The event, planned by the group Raise the Rates for the first week of November, challenges participants to buy groceries with the amount of money they would have if they were on welfare.

A year ago, the group calculated that a single person receiving benefits would have $18 a week for food. After the raise and accounting for rising rents and inflation, people would have $19 for food each week.

Asked about the group’s calculation, Social Development and Poverty Reduction Minister Shane Simpson said, “I would agree with Raise the Rates that it’s a huge challenge, especially for people in the Lower Mainland.

“It’s a challenge for a single person on social assistance to be able to get by, including being able to eat, pay the rent and that. That’s why we’re moving ahead with the poverty reduction strategy and trying to look at how we get at that and get at the cycle of poverty.”

Simpson, who for medical reasons won’t be participating in the welfare challenge, said there will be announcements in the next week about how the government is moving ahead on the poverty reduction strategy. “I hope we’ll be able to look at some strategies that will make life better for people who are living vulnerable on very modest incomes.” 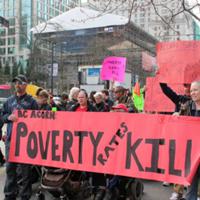 The calculation by Raise the Rates includes $548 to rent a room in an SRO in Vancouver. That figure is drawn from a report by the Carnegie Community Action Project. The welfare shelter allowance is $375.

Raise the Rates also includes $20 for a damage deposit, $28 for bus fare, $25 for a cellphone and $10 for personal hygiene and laundry. It notes the bus fare and cellphone would be needed for someone to look for work, as welfare recipients are expected to do.

All together, everything other than food adds up to $631 a month, leaving just $79 for food each month, or about $19 a week.

Simpson said the government knows the shelter allowance is much lower than actual rents, but said it’s looking for ways to make sure welfare increases go to the assistance recipient and not the person they may rent a home from.

“Part of the challenge, and we’re looking at this now around the $100 increase, is trying to ensure that money — or the vast majority of it — goes into pockets of people to use on things like food and that,” he said. “I am concerned that landlords and such just try to figure out how to scoop up as much of that $100 as they can. We’re looking at that and we’re trying to track that now to figure out if that’s occurring or not.”

He said the government is looking at its options. “We’re trying to figure out how to keep as much of that $100 in people’s pockets so they can use it for their everyday needs.”

Until the recent increase, welfare rates had not gone up in B.C. since 2007.