But protesters had a quick response. “I’ll see you in court,” said Hereditary Chief Ernest Alfred from the Nagmis, Lawit’sis and Mamalilikala nations.

“Our rights are being violated here and industry have broken the law,” Alfred told The Tyee. “Our customs and laws are older than those of Canada or B.C. and supersede any laws that DFO have put in place.”

A week later, members of the Musgamagw Dzawada’enuxw nation boarded the nearby Midsummer Island salmon feedlot and later blocked a vessel from restocking all the pens.

The protesters, many of whom are women, also documented that schools of herring appeared to be mixed in with the restocked Atlantic salmon. It is illegal to transport wild herring on the coast without a proper licence.

Last summer more than 50 protesters boarded the same facility to highlight the First Nation’s 31-year opposition to fish farms and to highlight the fact Marine Harvest has never negotiated a formal agreement with Musgamagw Dzwada’emnuxw to allow the farms in their traditional territory.

The occupiers, who are building a tiny house on the Midsummer Island fish farm, say they are defending aboriginal rights and title.

“We want the fish farms removed from our territory and the licences of occupation revoked and suspended immediately,” said Alfred.

The province has the authority to issue licences of occupation giving companies the sea floor tenure while Fisheries and Oceans Canada grants operating licences to fish farms.

The occupation of the facilities, supported by many First Nations, has become a test of promises by the federal Liberal and provincial NDP governments to respect aboriginal right and title.

Premier John Horgan is expected to meet with the protesters this weekend. An NDP government initially granted leases for fish farms in the area nearly 30 years ago.

But during the recent election campaign, Claire Trevena, the MLA representing the region and now transportation minister, vowed to evict salmon farms from the region.

“Are they going to force us to have these farms are our territory,” asked Alfred. If the governments fail to respect aboriginal territorial rights, “they will have a grand fight in front of them.”

Michelle Rainer, a communications advisor with DFO, confirmed that conservation and protection officers visited the fish farms on Sept. 18 and “informed protesters that violation of the Fisheries Act could result in investigation and potential charges.”

“A renewed nation-to-nation relationship based on recognition, rights, respect, co-operation, and partnership with Canada’s Indigenous Peoples is a top priority for the government,” she said, but “individuals should not trespass on private property.”

Asked to respond to the allegation of the illegal transport of herring along with restocked Atlantic salmon on a Marine Harvest vessel at the Midsummer Island facility, Rainer said “it’s difficult to comment on a specific incident without seeing photos or video.”

Meanwhile Alfred explained that he invited the DFO to come to the Swanson Island facility this week after he observed a vessel discharge waste water from a load of dead salmon into a nearby bay. He filed a complaint and captured video of the event.

He expected a response to the complaint when fisheries officers arrived at the occupation, Alfred said. Instead protesters were warned they could be charged.

“I was expecting to get a full report on the incident but the DFO didn’t even bring up the subject,” said Alfred. “The DFO are escalating this situation. Things could get very confrontational. Our people are not going to back down.”

Protesters at the Swanson Island facility recently moved to Marine Harvest’s abandoned cabins on shore after the company said it wanted to harvest the fish at the facility today.

Alfred said protesters will allow the company to take its Atlantic salmon out, but not to restock the operation.

“The discussion of rights, title, consultation, accommodation, and treaty are important discussions between First Nation governments and Canada,” added Roberts.

“Our two salmon farms have operated for 30 years legally and have continued to receive permits and licences granted by federal and provincial governments,” he said in a statement. “Marine Harvest Canada has, and will continue to seek meaningful engagement and solutions with all First Nations in whose traditional territories we operate.”

Earlier this month Vincent Erenst, managing director of Marine Harvest Canada, met with Namgis First Nation representatives about the Swanson Island occupation but was unable to “find a path toward a resolution.”

Marine Harvest says that it operates within the traditional territories of 24 First Nations and has agreements and “positive relationships” with 15 of them.

Concern about the impacts of fish farms on wild fish populations on B.C.’s coast has been a hot political issue for years because they are located on migration routes for wild salmon and on Indigenous territory.

But this summer the escape of 300,000 Atlantic salmon from a Canadian-owned fish farm in Puget Sound and several videos showing diseased, emaciated or deformed Atlantic Salmon at B.C. fish farms have heightened the debate.

Some of the videos were taken by Hereditary Chief George Quocksister Jr. of the Laich-Kwil-Tach Nation while travelling aboard the Sea Shepherd Conservation Society vessel Martin Sheen this summer. Many of the videos posted by the society also show schools of herring in the fish farms.

The salmon farming industry acknowledges that about 80 per cent of farm salmon in B.C. are infected with the piscine reovirus, which can cause the fish to become lethargic and emaciated. Many fish of this description appear in the videos.

“The few images of deformed or small fish provided to The Tyee were selected from hundreds of hours of footage gathered by activists trespassing on Marine Harvest worksites,” said Roberts. “The images do not accurately represent the healthy condition of the fish population.”

Roberts said that fish farm technologies allow unhealthy salmon to survive because the densely packed fish are fed and protected from predators.

Any “deformed, small or injured or poor performers” are later removed from the population and never make it to market, he added.

But new research published in the Journal of Experimental Biology shows that half of the world’s farmed salmon experience ear deformities resulting in deafness due to accelerated and unnatural growth rates. 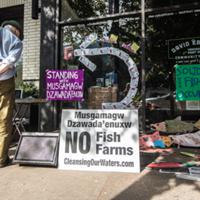 One of the study’s co-authors, Tim Dempster, noted that deformities are irreversible and get worse as the fish age.

“These results raise serious questions about the welfare of farmed fish,” said Dempster in a University of Melbourne press release.

The Monterey Bay Aquarium Seafood Watch program, which rates the sustainability of wild and farmed fish, recently gave farmed Atlantic salmon on B.C.’s coast a score of 4.28 out of 10 and a tentative recommendation of “good alternative.”

But the Seafood Watch program also scored Atlantic farmed salmon raised in recirculating tanks on land as its “best choice.”