Jay Peachy, who played a key role in organizing the office occupation, said they wanted the government to followup on promises made during the election and the following summer.

“We’re here to emphasize the moral imperative around Indigenous rights and reconciliation,” said Peachy, who calls himself a “fish warrior” and is often seen at salmon-related events as “Will the salmon,” wearing a papier-mâché sockeye head and rollerblades. “We’re here to remind this new government that they made critical promises.”

Peachy referred to a statement made by Transportation and Infrastructure Minister Claire Trevena, who is also the NDP MLA for North Island. Trevena visited the Namgis First Nation bighouse in Alert Bay this past summer and promised fish farms would be removed from First Nations territories and move inland.

The bighouse is a sacred space for many First Nations, where official meetings, ceremonies and decisions are held. Peachy said that a commitment in a bighouse indicated a level of honour and responsibility from the government that the hereditary chiefs involved in the Vancouver Island occupation won’t soon forget.

First Nations groups from the Namgis and Musgamagw Dzawada’enuxw have occupied two Norwegian-owned Marine Harvest fish farms in the Broughton Archipelago for more than three weeks. The occupation escalated quickly from tents to makeshift, weather-resistant houses on the farms. The occupying groups say they will stay until the facilities are shut down.

Hereditary chiefs, supported by family and friends, have been especially vocal about the fish farms they say are illegally placed on their territories without their consent. Members of the Namgis First Nation have opposed the Marine Harvest Swanson Island farm since it was first built 31 years ago.

Community members say that many of the fish farms were built along the traditional migratory route of the wild salmon on the east coast of Vancouver Island where the ocean water is rich in nutrients. But they also say that the rightful chiefs never signed off on the farms and that the fish farm industry has operated without the consent of those most affected by their presence.

Peachy compared the fish farm fight to a David and Goliath situation, but he said supporters won’t back down until meaningful change is implemented.

The protesters had planned to occupy the office all weekend, but left early, after Eby arrived at the office in the afternoon and talked with them.

The NDP made specific promises about fish farms during the spring election campaign. The party’s platform vowed to protect B.C.’s wild salmon, an “iconic species that underpin entire ecosystems.” 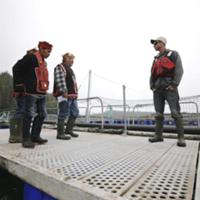 Fish Farm Drops Trespass Lawsuit Against ‘John and Jane Doe,’ but Not Morton

“Salmon are critical to the food, livelihoods and culture of coastal communities and First Nations,” the platform stated. “We will ensure that the salmon farming industry does not endanger wild salmon by implementing the recommendations of the Cohen Commission, keeping farm sites out of important salmon migration routes.”

Kwakwabalas Alfred, hereditary chief of the Namgis First Nation and one of the most visible leaders of the Swanson Island occupation, talked to Eby by phone as the occupiers watched.

“We’re frustrated with the lack of movement on behalf of the government,” Alfred told Eby over the phone. “We’re fighting for our lives.”

Eby told Alfred he recognized the urgency of their situation and said Lana Popham, minister of agriculture, made it clear in the legislature last week that the government is taking action.

“She was very clear that our government is not issuing new tenures and she has put a hold on existing tenures,” Eby told Alfred. “Until there is a full review, of not just the tenures, but all policies related to this kind of open-net pen aquaculture that led to such a disaster in Washington state.”

Eby referred to the Cohen Commission, the official governmental response to a 2009 federal inquiry into the decline of sockeye salmon in the Fraser River.

“I share your frustration of the 16 years that the previous government was so indifferent to the concerns of Indigenous people and so committed to expanding this industry, without knowing the impact to wild salmon,” Eby said.

He promised to bring Alfred’s concerns to Popham.

In a Facebook video released by the Swanson Island occupation campaign, Alfred told the crowd that he doesn’t feel like a warrior, or any of the other names he has been called over the past weeks. He called himself a school teacher and a father, standing up for future generations.

“We fight for our kids,” he said Sept. 9. “That’s our food. They don’t have a right to our wild herring. To pollute and dump the garbage into our territory. They’re renters and their time is up. We’re kicking them out and keeping the deposit.”

Hereditary Chief Willie Moon of the Kingcome Inlet band holds down the fort at the other occupation at the Midsummer Island facility. He said that this week was the first time occupiers saw a representative from Fisheries and Oceans Canada.

“A lot of our chiefs spoke with the man who arrived and it was our strong impression that he’s there to protect the farmed salmon, not the wild salmon,” he said over the phone. “They’re getting paid good money to stay hushed about the wild salmon.”

Fisheries and Oceans Canada did not respond to a request for comment on this story. The offices of Trevena, Eby and Premier John Horgan also did not respond.

Henderson is from the Gwa’Sala-‘Nakwaxda’w band, now located near Port Hardy on the northeast coast of Vancouver Island. Her community was forced to relocate in 1964, when Indian agents sent her people off in their boats and burned their houses down before they were out of the harbour.

She was joined Friday by her eldest daughter Crystal, who said she was emboldened by the efforts of the First Nations leaders on the front lines of the fight.

Crystal said she felt inspired to see First Nations youth speak up and take a stand against fish farms across B.C. A poet, she shared a poem at the constituency office:

Mother Nature doesn’t know what happened to us.
All she knows is that we left her, our responsibilities and obligations.
We have to come back and be responsible for her once again.
We are her protectors.

Tina Henderson said she grew up fishing with her family and has seen the wild salmon decline over the years. “We only took what we needed from the salmon,” she said, echoing a teaching familiar to many Indigenous peoples.

“That’s what we were taught and it’s something I value. My children have had the blessing of our wild salmon in their lives, but if we don’t come together, my grandchildren and great grandchildren won’t have that.”

The Hendersons have followed the escalating Swanson Island occupation closely and said they respected those who were making sacrifices to uphold their responsibility to Mother Nature.

“Our fish don’t have a voice unless we give it,” Tina said.