The last time Site C was fully reviewed by the BC Utilities Commission, it was 1983. The commission investigated for just over a year and ultimately concluded that Site C was unneeded and recommended BC Hydro begin investigating alternative energy sources in earnest.

Thirty-four years later, with sunk costs increasing every day, the Site C review ordered this week by the new NDP government has an unusual urgency. But the questions on the dam’s economics are complex with a huge amount of data to be examined. The review needs to be quick, but not too quick.

The new Site C review was formally announced a week before its start date of Aug. 9, with a final report due Nov. 1. BCUC commissioners have 12 weeks to answer some complicated questions.

The review is tightly restricted to economics, specifically asking how ratepayers will be affected by three options: continuing with the $8.8-billion project; pausing for an undetermined period; or cancelling the dam and power plant, remediating the site and using other energy sources to meet demand.

The commission will also find out whether Site C is likely to finish on time and on budget.

People who have participated in past BCUC hearings are concerned that the haste will prevent commissioners from thoroughly examining the data.

“The risk if [the review] is too short is that the evidence will not be sufficiently rebutted, pulled apart and examined,” said lawyer Bill Andrews, who has represented various independent organizations with intervenor status at BCUC hearings.

“The risk is a quick conclusion where the commission can’t see enough problems with Hydro’s evidence — which will almost certainly be to the effect that continuing with Site C is cost effective — to contradict that assertion. It’s a classic case of the devil in the details,” Andrews said.

“People who think they know in advance what the answer will be are being naïve,” Andrews said. “They’re not aware.” Many of the numbers won’t be known until BC Hydro submits them to the commission, he added.

Andrews and his clients are mainly concerned that intervenors — people or organizations impacted by the project — are allowed to participate in the review, cross-examining experts on the data and asking questions that BC Hydro would be required to answer.

“The rigour of the utilities commission depends on the involvement of intervenors representing different sectors,” he said. It’s the intervenors’ special interest and knowledge that gets to the heart of the information. “Intervenors are crucial to getting an accurate answer from the commission.”

While the details of the review process are to be determined, Michelle Mungall, minister of energy, mines and petroleum resources, said there would not be a formal public hearing, part of the usual BCUC process.

There will be public engagement, but BCUC hasn’t confirmed to what extent, if at all, intervenors will be involved.

“The [year-long hearing process] is the actual process that should have happened for Site C had the previous Liberal government done what they should have done,” Mungall said.

“But they didn’t. They chose another option that frankly did not do justice for British Columbian families and for ratepayers. We now have to do something and this is an appropriate measure to take so that British Columbians can get the questions they have around Site C answered.”

To answer the questions posed in the terms of reference set by the ministry, the commissioners will need to drill into load forecasts, future price expectations and discount rates.

To find out whether the project is on track, geotechnical details will be examined along with construction activity and changes to the multi-year schedules.

Mungall said she has every confidence this can be done in 12 weeks. The BCUC could request an extension, but Mungall would not speculate whether cabinet would grant it.

Peace Region farmer Randy Hadland is familiar with the depth of a standard review, having participated in the 1983 review and again in a 1990s BC Hydro-initiated review that found for the same cost of Site C (which was about $3.5 billion at the time), the Crown corporation could save as much as 50 per cent of the total energy consumption by investing in conservation.

“So for the price of the dam, which was going to give you 10 per cent more electricity, you could save 50 per cent,” Hadland said. 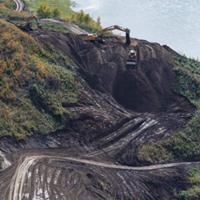 Hadland fears the quick review, with its focus on finances, will ignore other important issues.

“Putting aside the environmental aspects, the agro-ecology, the First Nations rights in this review, that’s tough,” he said. “That’s tough to take. Because it puts a priority on the finances, which I don’t think the finances really deserve. All those issues are of equal importance.”

Mungall’s office said in an email statement that the decision on Site C “must not be made on economic considerations alone.” When cabinet receives the final recommendation from BCUC in November, Mungall said it will review additional documents before making a final decision, such as environmental assessments, the report on Site C’s economics released earlier this year by UBC’s Program on Water Governance, consultation that’s already been done with First Nations, and the Joint Review Panel’s findings that focused on the non-financial impacts of the dam and concluded BC Hydro had not demonstrated the dam was needed at this time.

Story updated Aug. 3 at 12:15 p.m. to include new statement from Mungall’s office that cabinet will consider the Joint Review Panel’s findings in its consideration of the Site C dam project.