In the space of a single year, the value of Lululemon founder Chip Wilson’s mansion on Vancouver’s Point Grey Road jumped by about $12 million. Under current tax rules, and presuming the so-called “yoga pants palace” is the businessman’s principal residence, if Wilson chose to sell it tomorrow, he would not pay a single cent of tax on that $12-million windfall.

That’s because the federal tax system treats the money you earn from selling a principal home differently than other kinds of earnings, including profits from other kinds of capital investment. If you make money buying and selling stocks, for example, in Canada you have to pay tax on half the profit you made. If you work for wages, every cent goes into the calculation of your tax bill.

“This seems perverse,” says David Duff, professor and director of the University of British Columbia's Peter A. Allard School of Law’s Tax LLM Program. “I work hard and pay tax on my employment income, but if I buy a house and win the lottery, I don’t have to pay tax on any of that.”

As a tax expenditure, the capital gains exemption on principal residence has ballooned to around $5 billion annually, as house prices continue to rise in many large Canadian cities. The tax break is also what experts like Duff call “regressive”: it massively benefits the richest Canadians like Wilson, while directing only 10 cents of every dollar in benefit to the bottom 50 per cent of income earners.

Renters, in particular, are completely left out. In 2008/09, the most recent year for which the numbers have been crunched, homeowners received almost 93 per cent of the federal government’s direct and tax spending on market housing, while private renters received just over seven per cent (the calculation, by urban economist Frank Clayton, did not include expenditures for social housing). The exemption for capital gains on selling a principal residence is among the biggest reasons for this disparity.

Tomorrow’s federal budget offers an opportunity to correct the massive imbalance. Here’s how that could begin.

Take a little off the top

There are multiple ways the government could amend the capital gains principal residence tax exemption to target the windfall profits of housing speculators and the wealthiest Canadians, while still providing a boost to most homeowners.

David Macdonald, a senior economist at the Canadian Centre for Policy Alternatives, says the Trudeau government could draw inspiration from U.S., which currently puts a lifetime cap on the break you can earn from selling your primary residences. (This could change under President Trump.) In Canada, the potential tax benefit from selling a home is unlimited, unlike virtually every other government expenditure program: various programs for low-income seniors, for example, are capped.

If Canada allowed a lifetime exemption of $1 million, for example, once you made that much money from selling your home (or homes), you would pay regular capital gains tax on any further windfalls.

If you’re Chip Wilson, buying and selling multi-million dollar homes, you might hit that cap on your first sale. If you’re more middle class, you’d likely get to pocket your house sale profits tax-free.

“These measures would have the knock-on effect of likely reducing house prices,” Macdonald says.

J. David Hulchanski, a professor of housing and community development at the University of Toronto, says it’s also possible to target speculation using the capital gains tax on principal residences. For example, he suggests, “If you buy a house and sell it quickly, 100 per cent of capital gains [could be] taxed.”

As an owner held on to their home however, the portion of profit from its sale that was exposed to tax would decrease. If you sold a home six months after buying it, for example, more profit would be taxed than if you stayed two years before selling, and so on. “That will slow the market,” says Hulchanski.

Other twists would tackle a generational injustice built into Canada’s tax code.

As it currently exists, rapidly rising home prices in cities like Vancouver and Toronto effectively exclude most people born later from home ownership and the chance to reap untaxed capital gains. As a result, says University of British Columbia academic Paul Kershaw, who leads Generation Squeeze, a lobby group for generational housing equity, it is mostly young renters who face a crisis when it comes to housing.

He says it’s time to redirect some tax benefits their way too. “We have an age credit, a pension income credit, we have pension income splitting, which [together] add up to over $5 billion,” he says. “You could completely not touch old age security or the CPP, and you could ask the question, why do we still have these old tax credits that presume that the [elderly] life stage is the most vulnerable? It no longer is.”

Kershaw says some of those age-related credits may go “the way of the dodo” in this week’s budget.

Another way to address generational unfairness would be to do what a lot of other countries, including the U.S., currently do: levy inheritance or estate taxes. Canada used to, but abolished them in 1972, the same year it introduced capital gains tax. David Duff says there are two ways that could be done. One would levy a tax on the total value of an estate upon its owner’s death. Another would place a tax on inheritances received from an estate. Either would claw back some of the windfall profit on a decedent’s residence.

Speaking last month at The Tyee’s Home for Good evening of awareness about housing solutions, Concert Properties CEO David Podmore suggested a capital-gains tax tweak to incentivize maintaining and revitalizing the many wood-frame, two- to four-storey walk-up, rental properties that are aging across Metro Vancouver and Toronto.

The problem with many of these properties, as Podmore has explained it, is that they have been held for decades by families reluctant to sell or redevelop them due to the anticipated substantial tax bill on 50 per cent of their (often large) increase in value over that time.

Podmore suggests waiving the tax — in exchange for the final property owner’s binding commitment to rebuild at a higher residential density, maintained as a rental property either in perpetuity or for a defined period such as 80 years.

“Such a change would release sites well suited to affordable rental housing development,” he concluded.

David Rosenberg, chief economist with wealth management firm Gluskin-Sheff, has predicted we’ll see a “tax grab budget,” that could see the portion of gains on capital investments subject to tax raised from the current 50 per cent to 66.6 or even 75 per cent — for everything but principal residences. 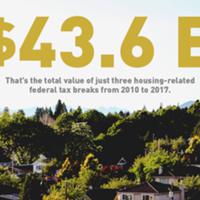 The Big Give: How Owners Got Rich, and Renters Didn’t

And there have been suggestions that even the long-sacrosanct exemption for homeowners profiting from the sale of principal residences may be under review.

Then again, says David Macdonald, it’s also very possible that Liberals will make no serious moves on housing taxation at all in this week’s budget, as they wait for America’s policies under Trump to become clearer.

“It seems like a lot of those big decisions will be pushed off to the fall,” the Centre for Policy Alternatives economist speculated. “Essentially what they are doing is waiting to see how big the tax breaks are going to be for Americans under Trump, to see if they can match them.”

In which case Vancouver’s most famous yoga pants magnate may have nothing to worry about when it comes time to cash out on his luxe waterfront home.