Premier Christy Clark's controversial visit to Haida Gwaii to give $150,000 to a school under federal jurisdiction was her most expensive charter jet trip between late November and March. 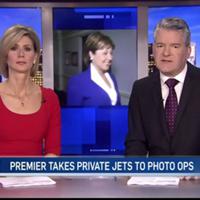 Clark, four aides (including videographer Kyle Surovy) and her RCMP bodyguard flew from Vancouver to Massett on Orca Airways. She went to announce a $150,000 grant to the Old Massett Village Council so it could explore building a $4-million auditorium at an on-reserve elementary school.

The trip sparked controversy when the Globe and Mail reported allegations that Clark's visit had influenced the outcome of a band election, helping re-elect Chief Ken Rea.

Challenger Kimball Davidson noted Rea supports a proposal by Bruce Clark -- the premier's brother -- and Broadwing Renewables to build a $10-million wind farm in the area.

"I was kind of shocked that Christy Clark would come up here just to say, 'Hey, we're going to give you some money,'" Davidson told the newspaper. "I think it all has to do with her brother."

Both the premier's office and Bruce Clark denied any connection between the $150,000 announcement and the wind farm proposal.

In a May 11 budget debate, NDP leader John Horgan noted the school was under federal jurisdiction and asked why Clark singled it out for a grant when a federal report had identified a dozen similar schools in "poor or worse condition? Why was it this visit?"

Clark initially said "requests come to government all the time," but later admitted that Rea made the request directly to her in a meeting.

There may have been an even more expensive flight that would have nudged the "Air Christy" tab beyond $563,000.

The government hasn't disclosed the invoice for Clark's April 20 round-trip on Orca Airways with a four-person entourage that included ubiquitous videographer Surovy. They traveled from Vancouver to Fort St. John and back so that Clark could headline a pro-LNG rally with a speech on the back of a truck.

Big price for Clark's visits to her Kelowna riding

The documents also show that Clark made three same-day trips to Kelowna for $11,111.

There are at least nine scheduled flights daily between Vancouver and Kelowna. Government policy says officials can book a chartered flight when there is no regular air service available that would meet their schedules or the charter cost is "economical as compared to the scheduled air service." The policy also says video conferencing must be considered to save money and mitigate greenhouse gas emissions.

The one-day Kelowna trips involved interviews with local media (Dec. 14), the memorial service for former premier Bill Bennett (Jan. 31) and a post-budget speech to the chamber of commerce (Feb. 18).

Clark's calendar also showed that on March 30 she flew to Kelowna, taking part in a photo op for a program to fight invasive mussels. Clark and her entourage returned to Vancouver that night. The cost was not included in the most recent FOI documents, but based on previous flights would have cost more than $3,000.

Avoiding 'crying babies and pesky members of the public'

When Clark was in opposition, she was a harsh critic of Gordon Wilson, former BC Liberal leader turned NDP cabinet minister, who flew on charters to commute between the capital and his Sunshine Coast riding.

"We have documents that show that on at least five occasions, he decided that it wasn't good enough for him to take any of those publicly available flights, any of those flights that have crying babies or pesky members of the public that might sit beside you on the plane," Clark said. "No, instead the minister decided that he wanted to take these private charter flights at over double the price."

In Judi Tyabji's recently published biography Christy Clark: Behind the Smile, she quoted her husband Wilson's account of the exchange.

"Because I represented a riding that was expensive to travel to and from, because of the lack of scheduled airlines and road connections, you had to take charter flights. My expenses as MLA were generally higher than the other MLAs," said Wilson, who represented Powell River-Sunshine Coast. "She had gotten into the kick of going after my expenses. My mother, who used to watch Question Period, said, 'Next time she jumps up to do this, tell her the reason your expenses are so high is because you don't have a broom.'"

Wilson endorsed Clark during the 2013 election campaign and Clark later hired him on a $150,000-a-year contract to promote B.C.'s LNG industry.

Through the end of March, Clark had made 21 trips to Kelowna during her term as MLA, of which 19 were single-day round-trips.

After Clark lost her Vancouver-Point Grey seat to the NDP's David Eby in the May 2013 election, Liberal MLA Ben Stewart resigned in Westside-Kelowna so Clark could be elected and sit in the legislature. Clark eventually appointed Stewart to a $150,000-a-year job as B.C.'s Beijing-based international trade promoter.

Clark promised to buy a house in her new riding. In February 2014, Kelowna Capital News reported Clark was close to finalizing a deal.

But on March 30, Global BC reporter Blaine Gaffney asked about Clark's residential status in her riding.

Gaffney asked if she had actually bought a house in the riding.

Clark has a Vancouver home and a vacation property on Galiano Island.

Clark's press secretary, Stephen Smart, did not respond to phone or email messages asking for comments on Clark's use of charter flights.

In Question Period on March 1, Clark said she used chartered flights because she has a "responsibility to make sure that I'm staying in touch with the people of the province, visiting communities, making sure I have a full understanding and a grasp of their wishes and aspirations."