The only thing Canada's foreign minister Stéphane Dion could do was stand next to his Chinese counterpart and try to maintain a pleasant veneer. 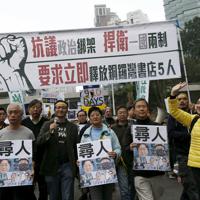 To his right Wang Yi was losing his temper after a Canadian reporter asked a question about three touchy subjects: Hong Kong book sellers critical of Beijing that have gone missing, the country's aggressive moves in the South China Sea, and the detention of Canadian citizen Kevin Garratt in China.

The questions were asked as part of a single predetermined pool question by Canadian reporters put to Dion by Amanda Connolly of iPolitics during a media session in Ottawa with the visiting foreign minister Wednesday.

Connolly referenced the three issues before asking: "Why is Canada pursuing closer ties with China, how do you plan to use that relationship to improve human rights and security in the region, and did you specifically raise the case of the Garratts during your talks?"

After Dion answered, Wang was asked a question by Chinese state-run media CCTV news, a question that within it made accusations about foreign aggression toward China.

Wang put aside his answer to attack Connolly, through a translator, for asking about human rights.

"I have to say that your question is full of prejudice against China and arrogance where I have heard that come from and this is totally unacceptable. I have to ask whether you understand China. Have you been to China?" Wang pressed.

As he went through familiar defence lines used by the Communist Party of China, he became increasingly upset.

Wang said civil rights are written into the Chinese law as well.

"I would like to ask you to please don't ask questions in such an irresponsible manner and we welcome good will suggestions but we reject groundless or unwarranted accusations," he said.

Groundless? Here are facts about the three issues raised in the question put to Dion.

Bookstore owners selling literature critical of Beijing in Hong Kong did go missing over the last year with some showing up on state-run media in China later issuing filmed apologies. One appeared on Hong Kong-based Phoenix TV in a 20-minute interview filmed inside Mainland China saying he voluntarily returned and did so in secret to aid a police investigation, according to a Reuters report. . The disappearance of the bookstore owners has led to concerns Beijing is reaching outside of its jurisdiction to prevent dissent and ignoring the terms of Hong Kong's repatriation to China in 1997.

Beijing's actions in Hong Kong were already at a boiling point due to the umbrella revolution in 2014 in which students occupied the streets of the financial hub to protest the Communist Party only allowing approved candidates to run in an upcoming election in 2017.

Some observers have said it's possible Beijing's actions could be costing China support it has enjoyed among some of the population in Hong Kong, hence it's a sensitive topic for Beijing officials eager to quell any resentment towards Mainland China.

China has been claiming parts of the body of water overlapping those of other nations and is expected to declare an air defence zone in the near future.

Taiwan, Vietnam, the Philippines, Japan and others have all butted heads with Beijing over territory in the sea, rich in natural gas and fish.

The dispute with the Philippines is touchy because, as Bonnie S. Glaser for the American think tank Council on Foreign Relations wrote, the United States has a defence pact with Manila.

"Statements by senior U.S. officials may have inadvertently led Manila to conclude that the United States would provide military assistance if China attacked Filipino forces in the disputed Spratly Islands," she wrote.

As well, a United Nations tribunal ruling on China's South China Sea claims is expected soon and Beijing has already said it refuses to accept any ruling, despite the country's signing on to the United Nations Convention on the Law of the Sea.

The document is seen as a "constitution for the oceans" by the United Nations and China says it isn't obligated to accept whatever the tribunal's decision may be.

But in the meantime, Beijing is spending a lot of time trying to portray itself as a victim in the South China Sea dispute, hence the question from the state-run CCTV reporter, which started off being about trade agreements.

"Some countries are stepping up military alliances and imposing pressures on issues such as maritime disputes, how do you think the relationships among countries in the Asia Pacific region should be strengthened?" asked the reporter.

3. The arrest of Kevin Garratt

Kevin Garratt is a Canadian who was operating a coffee shop in Dandong, a city in Northern China near the North Korean border. Garratt, a resident of China for 30 years, was arrested and accused of espionage in 2014 shortly after Ottawa said it had reason to believe state-backed Chinese hackers were targeting Canadian government servers.

Canada says it has been speaking to Chinese officials about the case, but little is known about Garratt's fate.

After Wang's outburst, Globe and Mail reporter Robert Fife stepped up to the mic for his question direct at the Chinese minister, also predetermined by Canadian media, and began by giving Wang a diplomatic rebuke to his attack on Connolly.

"With greatest respect minister, in defence of my colleague here, polls in Canada show Canadians are very concerned about human rights in China," Fife said before starting his question. But Fife's statement was not relayed to the minister in Mandarin by the translator.

Fife also asked how China, which adamantly insists other nations stay out of its internal affairs, can insist Canada lift restrictions on Chinese state-owned enterprises investing in Canada and build an oil pipeline through B.C. as a precondition for any future talks on a free trade deal.

Wang denied such preconditions exist. Those conditions, however, have been written about in Canadian media.

Wang did promise Fife he would find out a firm answer on whether such restrictions do exist.

Wang's promise ended his availability to the media. Reporters left buzzing about the minister's outburst.

At the event, China and Canada also jointly announced the two countries would cooperate further, establishing working teams on various topics including energy and agriculture and ring in a "golden age" of relations between the two nations.

During Wang's outburst, Stéphane Dion stood by silently. Dion's face was near expressionless as Wang, the representative of an unelected government whose laws Amnesty International has said "endanger human rights," berated a Canadian reporter in Canada for asking a Canadian minister about a detained Canadian.