Perched on a slightly tattered couch, Samantha Freeze is surrounded by cardboard boxes, paperwork, recently delivered appliances and '70s-era furniture as she welcomes this reporter into her newly rented Richmond farmhouse. The floor slopes distinctly southward towards the overgrown backyard. "Everything in Richmond is sinking," she notes. 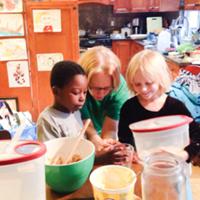 Currently host to a blueberry farm, the acreage will soon be home to several refugee families and single men, seeking asylum in Canada. It's a project of Inland Refugee Society, Freeze's workplace, which helps meet newcomers' immediate housing, food and language needs on arrival.

There's still a lot of work to do on the house before the refugees can move in. Many have been waiting in limbo for months, staying in homeless shelters, hotels, and with volunteer billets, including two with this reporter.

The struggle to find housing in Canada's most unaffordable region is daunting for everyone, but it's especially so for asylum-seekers, who have no landlord references, no previous tenancies, and generally only a meagre government assistance cheque.

"They're nervous, they're stressed out, and many of them are living in shelters currently," Freeze said. "You've got a population that really desperately wants to integrate and get into the workforce."

Finding long-term lodgings for refugees has now become the biggest challenge for settlement workers in Canada's most unaffordable region, a number of support agencies say.

Since the beginning of November, nearly 1,500 government assisted Syrian refugees have arrived in British Columbia. By March 1, the province is expected to receive a wave of 690 more.

"That's Tuesday next week!" exclaimed Chris Friesen, director of settlement services for the Immigration Services Society of B.C. "And these numbers change daily."

Several months ago, settlement organizations asked the federal government to temporarily pause new arrivals to the Lower Mainland, in order to address the housing backlog.

One of the major housing challenges, Friesen explained, is that refugee families are increasingly large -- often between six and 13 members. "How do you find rental accommodation for large family sizes?"

He said the numbers are putting a strain on his organization and others. "Normally we get 900 government-assisted refugees a year," he said. "Now we're getting 900 in a month. Everything is being stretched."

WAYS TO HELP REFUGEES IN BC

Immigrant Services Society of British Columbia: A primer on how you can volunteer or donate to help refugees settle here.

Inland Refugee Society: Often the first point of contact for asylum-seekers, this nonprofit meets immediate needs for shelter, food and language and life skills. It's seeking short- or long-term housing offers too.

DIVERSEcity Community Resources Society: Serving new Canadians in Surrey and Delta, this organization has a Refugee Support Fund for its refugee work.

Vancouver far behind in housing: minister

In fact, 69 per cent of Syrian refugees landed in Vancouver have not been permanently housed yet, Canada's Minister of Immigration, Refugees and Citizenship John McCallum told the House of Commons immigration committee Tuesday.

That number is significantly above the Canadian average; the proportion of Syrian refugees not yet permanently housed nationwide sits at 48 per cent, he said.

"Vancouver does seem to have certain issues that other cities do not seem to have," he told the Standing Committee on Citizenship and Immigration.

But McCallum insisted the government is "making good progress" towards its revised goal of admitting 25,000 Syrians to Canada before the March 1 deadline.

As of Thursday, Friesen said, 917 refugees are still waiting in temporary accommodations in B.C. compared to the 565 now permanently housed. That's a seven per cent improvement from McCallum's start-of-week stats, but still raises questions from critics.

Jenny Kwan, the federal NDP immigration and refugee critic, asked McCallum at the committee hearing why so many refugees are still waiting for housing in Vancouver hotels, some for weeks. In one hotel in her East Vancouver riding, she said there are 37 families.

"Ten remained since December," she told committee MPs. "In the same hotel, 12 were moved with one hour's notice to another hotel."

For many who have found permanent housing and could leave the hotel, Kwan added, it wasn't government assistance but "volunteers" who took charge of the situation.

Friesen admitted hotels aren't ideal for refugees, but said there's a rationale behind them, at least during the "intenstity of the reception phase" when refugees need focused medical, language, financial and housing help.

"We only have two to three days' advance notice when families will be coming," he said. "It's a constant juggling act, so we've needed the flexibility of blocking off rooms, with a discount. Plus, we can set up offices in these hotels, so I can have staff in each hotel working with the families."

The charity also houses people in its existing Welcome House downtown, and in several apartment buildings donated by local developers as they await demolition.

"This is a massive operation," Friesen said. "We have thrown the net wide looking for permanent housing. Nothing is ruled out."

Meanwhile, the challenge remains to house all refugees, not only the influx of Syrians.

"There's a huge wave of Afghans," said Freeze of Inland Refugee Society. "It's the second-biggest wave across the globe right now after Syrians. We had no idea why -- all of a sudden we went from receiving maybe 120 in a year to receiving 120 in three months."

She spends "six to eight hours" a day phoning landlords to find rental housing, she said. A few have hung up immediately upon discovering the tenants would be refugees; others expressed doubts about renters on welfare.

Freeze said that, like large families, single male refugees in particular are hard to house -- sometimes mistrusted by landlords, and receiving only $375 provincial shelter assistance rates in a region with rents significantly higher.

"Honestly, it has been a real pain," she said. "And it's gotten way crazier these last couple months. Now we're getting waves of larger families arriving."

Inland has asked volunteers to offer up short-term housing or discounted rent, on top of its usual caseload -- but organizing billets for so many people proved daunting, and relying on philanthropy is not a long-term solution, Freeze noted.

Vancity Credit Union has also taken up the cause -- offering interest-free loans for homeowners to renovate secondary suites to house refugees.

And an upcoming Vancouver refugee complex, the 58,000-square-foot Welcome House, promises 16 housing units with up to 138 beds, plus an array of services delivered by settlement organizations. It's the first of its kind in the world, the B.C. government boasts, but it won't be finished construction until later this year.

Until then, groups continue to scramble.

"Everything's been donated, which is amazing," Freeze said, touring through her soon-to-open refugee house. "I'm burned out, but once this house is done I can relax a little bit."