A low-income family in British Columbia pays more than twice as much tax as a similar family in Alberta or Quebec, according to a comparison included in B.C.'s budget documents this week. 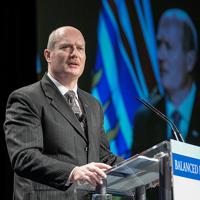 The fact stands in stark contrast to a claim Finance Minister Michael de Jong made while presenting the budget on Tuesday.

Singling out a Belgian-born Radio Canada reporter, de Jong said in French, "For me, it's important to understand, the same person if he lives in Montreal, Trois Rivieres or Quebec, he's going to pay $8,000 -- $8,000 Sophie! -- more than the same person in British Columbia. It's incredible."

On the screen behind de Jong was a slide promoting B.C.'s "lowest provincial personal income taxes for individuals earning up to $122,000" in 2016.

According to the slide, the British Columbian would pay $9,963 in income tax while the person in Quebec would pay $18,320.

Poor families pay more in BC

That table compares all 10 provinces on a wider slate of taxes that apply to families and individuals at various income levels. Besides provincial income tax, it factors in child benefits, property tax, sales tax, fuel tax, carbon tax, health or payroll taxes and federal taxes.

Both Alberta and Quebec provide significantly higher child benefits to families than B.C. does, accounting for a large part of the difference.

And while a low-income family in B.C. pays no provincial income taxes, four other provinces -- Saskatchewan, Manitoba, Ontario and Quebec -- actually provide money to such families through their income tax systems. Quebec offers the most help that way, transferring $3,179 to the low-income family, according to the B.C. budget documents.

The table leaves out other costs that governments have a role setting, such as electricity, car insurance or childcare.

Of the six situations outlined in the table, the only one where British Columbians have the lowest overall tax is for unattached individuals who make $80,000 a year.

Asked in the Legislature hallway about the table showing low-income families pay more than twice as much tax in B.C. than they would in Alberta or Quebec, de Jong said, "You tell me the table, I'll go review it since I haven't memorized, and I'll come back and talk to you."

He was unavailable by publication time.

Carole James, the NDP finance critic, said the government is selective in what it chooses to highlight.

"Once again it shows the game that this government tries to play with the public, trying to pretend we have the lowest income tax," James said. "The public sees through that."

MSP premiums, hydro rates, ICBC rates and post-secondary tuition all add to people's costs and it's "simply ridiculous" not to include them, James said. "They know they are taxes. You can call them whatever you want, but they're taxes and they add to a family's burden."

Adrienne Montani, the provincial coordinator for First Call: BC Child and Youth Advocacy Coalition, said she was surprised low-income families in B.C. pay double the overall tax as they would in Alberta or Quebec.

"That's pretty shocking," she said. "We're really doing less than other provinces to bring down the market poverty rate... We're one of the low performers of all the provinces in bringing down the child poverty rate with government transfers."

According to First Call, one in five kids in B.C. -- about 167,810 children -- lives in poverty, which is above the Canadian average.