British Columbia Finance Minister Michael de Jong presented a surplus budget that he said allows the government to ease conditions for some of the province's most vulnerable people, but he agreed with observers who said the help is minor. 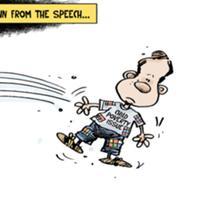 When Do the Needy Get to Enjoy 'Bright Spot' BC?

"I don't think this makes life easier for people, but hopefully it makes it a little less hard," he said of a change that will give 100,000 people receiving disability assistance a maximum increase of $77 a month starting Sept. 1.

The rate for an individual has been frozen at $906 a month since 2007. The increase will be partially cancelled out for about 55,000 people as the government stops paying for $55 a month transit passes and $66 a month transportation subsidies.

B.C. has flexibility thanks to a relatively strong economy and past prudence, he said. With economic growth projected at 2.4 per cent, B.C. leads Canada and is stronger than other parts of North America, though de Jong cautioned, "I wouldn't use the word 'spectacular.'"

The budget for 2016-2017 includes a surplus of $264 million. That continues the trend from the current fiscal year, where the surplus has grown to $377 million according to updated numbers presented with the budget.

The government is yet to draw down a $250 million forecast allowance, suggesting the surplus is likely to grow further by the time the public accounts are released in July.

Debt for infrastructure projects continues to grow, and total debt is projected to hit $45 billion by 2019, but de Jong stressed that the debt from direct operations has shrunk to the lowest it's been in decades. "To the extent that we borrow, we borrow in reduced amounts and we borrow to build," he said.

Increases 'a drop in the bucket': CCPA's Ivanova

The province is using some of its financial flexibility to address pressures on the ministries that provide disability assistance and child protection services, de Jong said. The budget includes money to hire more social workers and to cover increased demand on the welfare system.

Many people are moving to B.C. from Alberta, which has been hit hard by the large drop in the price of oil, de Jong said. "Some of those folks are moving because they are in difficulty."

De Jong acknowledged it has been a long time since there was an increase to disability payments. Everyone on disability assistance will get a $77 a month increase, he said. The budget includes no increase for anyone on regular income assistance.

The province will no longer provide $52 bus passes, but people can decide if that's what they want to spend their money on, he said. He added that the ministry believed some people have been receiving the passes but selling them at a discount for money.

The increased disability payment does little to make up for the increases in the cost of living since the last raise in 2007, said Iglika Ivanova, an economist with the B.C. office of the Canadian Centre for Policy Alternatives. Rents have gone up 12 per cent and food 23 per cent since then, she said.

"We need to have increases that actually reflect the cost of living in our province," she said. "Leading the country shouldn't just be in GDP growth, it should be about how we treat the most vulnerable among us."

The budget included some help for homebuyers and for childcare, but not much, Ivanova said. "They're all a drop in the bucket in terms of what we can do for the most vulnerable." Instead of making debt reduction the priority, the government should focus on addressing child poverty, she said.

"A lot of the budget was underwhelming," said Michael Prince, a University of Victoria human and social development professor.

Rather than present a vision, it tries to address topics like housing, child protection and disability assistance that have been sore spots for the government in recent years, he said. "To me, this is a budget that looked backwards."

Paul Kershaw, a professor in the school of population and public health at the University of B.C., said that it now takes 16 years for an average British Columbian to save the 20 per cent down payment they need for an average house. "Today's budget needed to do more," he said.

It will take close monitoring to make sure the government hires the number of social workers that it has been promising, said Mary Ellen Turpel-Lafond, the province's representative for children and youth. "I don't have confidence in their numbers."

In 2014 the government announced it would hire 200 additional social workers to work in child protection, but has since only added 86. "They're in a hole, and the hole hasn't been filled," she said.

Turpel-Lafond said she has warned of a crisis for years and that it is being reflected in vulnerable children living in hotels and tent cities in the province. "It was far too easy to sacrifice child safety for the bottom line of the budget," she said.

The budget included changes that would see MSP premiums decrease for 335,000 individuals and bring the number who don't pay for MSP at all to two million.

However, anyone making $42,000 a year will pay the maximum for MSP and the rate will increase by four per cent.

"[These are] some very small improvements for some families in British Columbia," said Edith MacHattie, a co-chair of the B.C. Health Coalition. "It falls far short of what we and British Columbians were advocating for."

B.C. is the only province to charge a premium specifically for healthcare, and the coalition had been pushing to have MSP rolled into the income tax system so that it would be more in line with families' ability to pay, she said.

The president of the B.C. Nurses' Union, Gayle Duteil, said it's good that lower income people will pay less for MSP, but overall the government will be collecting more from the health tax and that the $42,000 threshold is low. "With two children, that's not a very significant income."

The government is earmarking $100 million from the 2015-2016 surplus to start the prosperity fund that Premier Christy Clark has promised over the last three years in connection to establishing a liquefied natural gas export industry.

Budget documents said that at least 50 per cent of the fund will be used to pay down debt in the future. It will also be used to invest in health care, education, transportation, family supports, and other priorities, the documents said.

There's no revenue from LNG yet, but the timing "makes sense" to start the fund since the B.C. economy is leading the country in economic growth and running surplus budgets, de Jong said.

With the government under pressure to address soaring real estate prices in Vancouver, de Jong said the province will begin collecting data on the citizenship of people buying property.

The budget speech also mentioned the province is planning to appoint a commission on tax competitiveness, establish a tax credit for farmers who donate food to charity, and reduce the tax credits provided to the booming film industry.

The budget is full of small measures that sound good but will do little to help, said NDP leader John Horgan. "Christy Clark demonstrated that this budget is not about hard-working families in British Columbia; it's all about her priorities that are completely detached from the priorities of regular British Columbians."

The government is making cosmetic changes on housing affordability and investing more in capital projects for the liquor distribution branch than it is in social housing, he said. "That's not an investment and an infusion in housing for British Columbians. That's a shell game."

The increase to disability payments, which will partly be clawed back through the changes to transportation funding, is also a shell game, he said. "It comes nowhere near addressing nine years of zero increases for people with disabilities and people on income assistance. It's a step, but it's a very, very modest step."

Green Party leader Andrew Weaver, who has been pushing the government to eliminate MSP premiums, said that even with the changes the payments are a regressive tax. "The problem here is it's not dealing with the fundamental issue."

Weaver, who voted for the government's budgets in the two years following the 2013 election, said the government has lost direction. "I will not be supporting this budget," he said.