PARIS -- For years David Miller was in the unenviable position of advocating for strong action at each year's round of United Nations climate talks, while his prime minister did the exact opposite. "I felt very embarrassed," recalled the President and CEO of WWF-Canada, one of the country's largest green groups. In a negotiations process premised on consent among 196 nations, Miller got used to seeing the Conservative government of prime minister Stephen Harper obstruct progress. 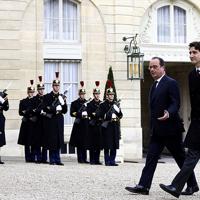 In Paris, Trudeau 'Here to Help' but Quiet on New Emissions Targets

"It's easier to block international climate change negotiations like this than to help them succeed," he explained. "A few recalcitrant countries can really do harm." Harper's leadership was so badly regarded at the talks that in 2013 Canada was given a "Lifetime Unachievement" award by hundreds of civil society groups.

But international perceptions of Canada appear to have shifted dramatically under the leadership of Prime Minister Justin Trudeau. "My sense from what I'm hearing from people is that Canada is back," Miller said inside the Paris conference center where world ministers are in a final push to negotiate a post-2020 climate deal by Friday. "I've heard this all over the place… there's a buzz, no question about that."

It may have began when President Barack Obama called Trudeau "extraordinarily helpful" on climate change at this year's APEC Summit -- or after Trudeau announced $2.65 billion in climate aid for developing countries on day one of the Paris talks. But there was no denying it after Canada's new Environment Minister Catherine McKenna was appointed as one of 14 special "facilitators" to help smooth the negotiations process -- the first time Canada has played this role in a decade.

"We lost our influence through our environmental positions [under Harper]," Miller said. "I think it's fantastic that Canada's back. It's necessary but not sufficient. It's a starting point. And the question now is: how does Canada build on that?"

In some sense the country will be building from scratch. Under Harper's leadership, "Canada was perceived pretty badly," explained Liz Gallagher, leader of the Climate Diplomacy program for E3G, a sustainability NGO with offices in London, Brussels, Berlin, Washington, DC, and Beijing. At each year's round of talks, she went on, "the Canadians mostly went into their shells and didn't really do that much. Occasionally they'd be unhelpful on some proposal. Really we mostly kind of ignored them." But she thinks that's changing. "We're definitely not ignoring them now," she said.

That's because the Trudeau administration is offering commitments and action to the negotiations process. It's promised billions of dollars in climate finance, called for a price on carbon, endorsed language around "decarbonization" of the world's economy and supported efforts to restrict global warming at 1.5 degrees Celsius -- a much stronger goal than the two degrees threshold the Paris summit is officially aiming for. "Canada now has more skin in the game," Gallagher said. "Its position is not just about the obsession and prioritization of its [oil sands] industry. It can negotiate and leverage and get what it wants rather than just be bypassed."

The impact of that shift was made clear when French foreign minister Laurent Fabius, who is president of COP 21, invited Canada's Environment Minister McKenna to be one of 14 consensus-building facilitators in the Paris talks. It's a role requiring McKenna to "lead informal discussions with her international counterparts and negotiating teams with a view to helping continue progress on certain parts of the text of the agreement," according to a statement from the Canadian government.

Gallagher explained that such facilitators are chosen "for their skill -- if they are good with people, good at negotiating," she said. "The second reason is that the person is not totally biased, they're not coming from a really polarized standpoint." Miller said it's no coincidence that the first Canadian facilitator chosen in a decade of UN talks doesn't belong to Harper's Conservative party. "You can't conceive of Joe Oliver, who called environmentalists 'terrorists,' being put in that position," he explained. But we're now in an exciting new era, Miller went on, when Canada has been given the opportunity to "go back to its historic strength of being a catalyst diplomatically."

In order to regain that power Canada will actually have to deliver on all the talking it's done at Paris. It won't be easy. A study this year in the academic journal Nature, for instance, suggested that continued oil sands growth is incompatible with a world that limits global warming to two degrees by mid-century. And though Trudeau has promised to meet with Canada's premiers within 90 days of the Paris talks, he hasn't given any firm indication of when the country will have a new national climate plan. Which has led activists like the Wilderness Committee's Torrance Coste to accuse the Prime Minister of "talking [about] acting on climate, but not walking the walk."

Yet Miller believes that as the Paris climate negotiations come to a close this Friday, Canada is taking steps in the right direction -- and that will help the country "regain international influence" that was lost under prime minister Harper. "People are ready for Canada to be a leader again," Miller said. "They're more than ready."