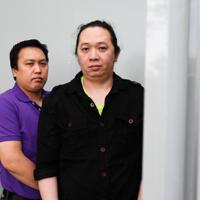 On Thursday, the BC Human Rights Tribunal rejected the coffee giant's efforts to be removed from a case launched by the United Steelworkers Union on behalf of employees brought to Canada under the Temporary Foreign Worker Program.

The complaint, lodged by a group of Filipino employees against Tim Hortons and former Fernie, B.C. franchise owners, alleged the workers didn't receive overtime pay, were forced to stay in lodgings rented from the owner, and threatened with deportation if they complained.

Lawyers for the workers accused the firm of violating the Human Rights Code ''because of the complainants' race, colour, ancestry and place of origin,'' according to tribunal filings.

Tim Hortons in turn argued the union doesn't have the authority to represent the non-unionized workers, and denied discriminating against them, saying that it ''allowed banking of overtime and assisted members of the Complainant Group with immigration and other issues,'' according to a tribunal summary.

Tim Hortons also argued that only the franchisee, not the parent company, should be investigated, and said the company was ''not party to any employment contract,'' only menus, prices and branding.

For Steelworkers regional director Stephen Hunt, that claim falls flat. Tim Hortons was suggesting if you're going to go after somebody, go after the franchisee,'' he said. ''But Tim Hortons is responsible for their franchisee.''

In a Tyee story about the company's use of foreign workers in June 2014, Tim Hortons said it had ended its relationship with the Fernie franchisees because they had ''failed to comply with Employment Standards requirements, a matter we take very seriously.''

The ex-franchisees named in the complaint, Pierre Pelletier and Kristin Hovind-Pelletier, have denied the workers' allegations.

In its latest ruling on the complaint this week, the tribunal didn't weigh the merits of the allegations. But it did conclude that Tim Hortons can't pass the buck to its local franchise owners.

''It is abundantly clear on reading the complaint, even if not expressly stated, that what is being alleged against them is that they had the ability to interfere with and influence the allegedly discriminatory conduct of the Franchisee Group and failed to do so,'' the ruling said.

Steelworkers hope for 'some resolution'

The complaint against Tim Hortons is the latest in a string of controversies involving the federal Temporary Foreign Worker Program. The Conservative government overhauled the program's rules last year.

In recent years, fast food chains across the country have faced scrutiny for claiming they need to hire foreign workers because there aren't enough qualified Canadians to fill their low-wage positions. Federal law requires employers to prove they made an effort to find Canadian workers first.

The Liberal Party, now in government, made no mention of the program in its election platform. However, in an immigration-themed campaign document, the party criticized the Tories for more than doubling the number of temporary foreign workers allowed into Canada ''in order to meet short-term labour market needs.''

But the document wasn't specific about what actions a Liberal government would take other than offering a ''residency time credit'' for temporary residents applying to become citizens.

For multi-million dollar corporations like Tim Hortons, Hunt said, relying on the program is inexcusable. He acknowledged the iconic firm is known for contributing positively to communities across the country, for instance through charitable donations and summer camps. Allegations of worker exploitation risk harming that good will, he said.

Hunt said the Steelworkers' hope is to ''get some resolution'' for the workers and their families, and also enable them to stay in the country. Documents filed in the tribunal case suggest the workers, if successful, could be owed more than $60,000.

Hunt denied the complaint is motivated by a fear that employing temporary foreign workers might drive down local wages or take away union jobs.

''Our fight was never with the workers,'' Hunt said. ''If we have that much of a labour shortage in Canada where we have to bring in temporary workers, let's open up proper immigration for people to have the full rights and protections of any Canadian.''