Erin Arnold knows what she wants from Canada's next government. 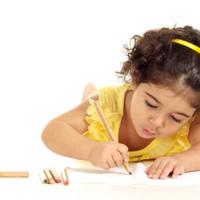 Which Party Has the Best Plan for Kids?

"After the election, I hope for affordable and accessible child care for $10 a day," she says. "And I hope for a poverty reduction plan to better access needed resources for children."

Arnold, a 36-year-old mother of one, said finding child care for her son was one of the greatest challenges she faced as a single parent in B.C.'s Tri-Cities area.

"It was definitely a struggle to find affordable child care, or even to access child care at all," she said.

Arnold searched the region for a licensed centre for her then-four-year-old. But that would set her back $1,200 every month. "It was more than rent!" she recalled. "I was willing to pay anything and take out a loan or borrow money from family to find a spot."

That figure is just under Vancouver's median average cost of child care, according to a Canadian Centre for Policy Alternatives report.

And even parents who earn a moderate income say that simply finding a spot can be a frustrating and lengthy task.

"Money did not help," Arnold said. "There were no spots for licensed child care anywhere... some places won't even put you on a wait list, because it's so long."

Her three-month quest to find a child care spot for her son wasn't just frustrating -- it made it "nearly impossible" to get to medical appointments, her government job and volunteer commitments.

"I took my son where I could," she said. He stayed with family when possible, often for days at a time. And Arnold had to take time off work because child care wasn't available.

Where the parties stand

The Conservatives staked their position on the issue weeks before the election campaign began, announcing an enhanced Universal Child Care Benefit plan and mailing cheques to 3.8 million Canadian families.

The program had provided $100 per month to families children under six -- those who typically need full-time child care. But the July pre-campaign announcement increased that to $160 and added new payments of $60 a month for every child between seven and 17. The increase and new payments were retroactive to Jan. 1, increasing the size of the cheques mailed to families.

Prime Minister Stephen Harper said the Universal Child Care Benefit was "the single biggest one-time direct payment in Canadian history" as $3 billion was sent to families. The annualized cost of the program is $4.4 billion.

Harper also noted that the benefit is not specifically for child care, making it "a major opportunity for families to invest in their priorities and their children." (There is a catch -- the benefits are taxable.)

But the plan doesn't address Arnold's concern about access to child care as it doesn't support creation of any new spaces. And the benefit, at $1,920 per child under six, covers less than 15 per cent of the median cost of child care in Vancouver.

The NDP has also made child care a top election item. The party has promised to fund one million child care spaces -- new and existing -- by the year 2022, at a cost of $5 billion a year. The funding would ensure parents don't spend more than $15 per day, or about $300 a month. The plan is similar to the child care system in NDP leader Thomas Mulcair's home province of Quebec, where care is available at $7 a day.

And it's not clear if one million spaces -- likely about 130,000 in B.C. -- would be enough to meet demand or resolve Arnold's concern about access. The province now has about 110,000 licensed child care spaces, according to the provincial government.

The Liberals have not yet released a child care plan, though they promise one before the campaign end. Ten years ago the then-governing Liberals developed a national child care plan under their minority government, but it was abandoned when three opposition parties defeated the Liberals on a non-confidence motion and the Conservatives formed government in the ensuing election.

Leader Justin Trudeau has said a Liberal government would end the Conservatives' enhanced Universal Child Care Benefit and replace it with a tax-free payment to parents based on income, which he called a Canada Child Benefit. Households earning more than $150,000 would receive less, and those earning $200,000 wouldn't get anything. Trudeau's plan would add $4 billion a year to Canada's current $18 billion in benefits paid to parents.

Trudeau has said the Liberal plan would provide the majority of families with larger monthly payments than the current Conservative plan. Those whose income was low enough to qualify for the maximum payment would get $533 a month per child under six, and $450 for those six and over (compared to the Conservatives' flat rates of $160 and $60).

"Our child benefit goes directly to the families who need it the most," Trudeau told the CBC in May.

The Green Party is the only one to release a full campaign platform, and it has a section on child care, albeit with few specifics. The party says it is committed to "ensuring high-quality affordable child care" across the country and promises to attempt to revive the 2005 federal-provincial agreement on a national child care plan.

The platform also expressed support for measures that would encourage women to rejoin the workforce "whenever they choose" after having a child. It promises a $1,500 annual tax credit for each workplace child care space created by employers.

Erin Arnold did eventually find a YMCA child care space for her son, who is now in elementary school. Although no longer a single mother, she said she remains worried about today's parents who struggle to find child care. That's why she got involved with a newly formed advocacy group, the Single Mothers Alliance.

"Child care and poverty go hand in hand," she argued. "I've been able to advocate for myself and have those skills because of my life experience, but a lot of single moms I come across don't have the same skills to fill out the forms and go advocate to their local MLA. Those are skills I'm trying to pass along to other women to be able to get on the radar -- or on the wait list."