In 1991, Stephen Harper wrote a graduate thesis for the University of Calgary detailing how the holders of government purse strings were liable to use their power to budget for their own interests, rather than those of the public, often as elections approached. 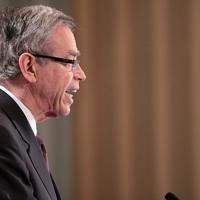 Harper's economics thesis addressed the political business cycle, a concept related to how governments spend money to boost their popularity.

He argued that Keynesian economic theory, which suggests government policy and spending can help stalled economies, is ripe for abuse by desperate politicians, according to the rules of the political business cycle.

Now, with Harper's Conservative MPs handing out money like a broken slot machine spilling out quarters, a political science professor said the contradictions in Conservative philosophy and reality are on display.

Radhika Desai, a political science professor at the University of Manitoba, said the enhanced Universal Child Care Benefit in particular showcases the myths and realities of what the Conservatives say is their fiscal and political policy.

"Overall they are pursuing a policy of austerity," Desai said. "But in reality, if you look underneath it, they have to spend something in order to win elections."

Desai also said the benefit won't help families who need it or boost the economy, because lower income people are likely to put it towards debt and wealthy people will simply add it to their money pile.

But the Harper government is still cutting $3 billion in cheques: $520 for each child under six and $420 for those six to 17. The intent, Conservative MPs have said, is to help out parents and give the economy a kick-start.

The government has been on a funding spree for some time, with numerous giveaway announcements daily.

The use of government fiscal stimulus in times of economic vulnerability is one of the main tenets of Keynesian theory, and back in 1991 Harper hated it.

In his graduate thesis, he argued that spending could lead to deficits as governments plan budgets with elections -- rather than the country's best interests -- in mind.

"It is also interesting to note that both these governments were majority governments that languished moderately low in the polls and were eventually defeated," he wrote. Harper added those defeats were in keeping with the "impression that deliberate and excessive electoral budgeting probably backfires."

This year, however, as his party polls behind the first place New Democrats, it appears that Harper has embraced government spending. Conservatives across Canada are pumping up the $3-billion universal childcare benefit payments to parents.

The letter -- marked "confidential" despite its collection of familiar talking points -- goes on to ask MPs to help promote the benefit.

But promotion was already in full swing weeks earlier, when Employment Minister Pierre Poilievre tweeted Canadians to inform them that their benefit cheques were at the printers.

Poilievre, who toured Canada to hype the benefit, drew scorn from opponents this week for wearing a Conservative party polo shirt to a Government of Canada announcement in Halifax.

He tweeted about how lucky families were to have a chunk of their taxes returned to them, and publicized that families in Newfoundland and Labrador were getting $39 million.

Making cameos on his Twitter feed were former government communications staffers like Jan O'Driscoll, who just popped by to say, "Thank you @pmharper and Min @PierrePoilievre our son's #UCCB cheque arrived today!"

Another was Jenn Gearey, who left her job as the communications director for the department of National Defence in May. She wanted to tweet that "#UCCB becomes #RESP in our home today. Four children, that's 20 years of university combined if they stay in Qc."

But others weren't as happy with how the government is promoting the benefit.

For example, the Office of the Ethics Commissioner said that while Poilievre isn't breaking rules, wearing a Conservative shirt at a government announcement could "be seen as inappropriate."

Such uses of government policy to win popularity are targeted in Harper's critique of Keynesian theory in his thesis.

He cites a 1988 tax cut, made in the hopes of winning votes before that year's election, as contributing to the financial woes of then prime minister Brian Mulroney.

"With the temporary tax cut included the government may have engineered a bigger deficit for the 1988 election despite an economic boom and ongoing tax problems," Harper wrote. "The discretionary fiscal cycle is clearly electoral rather than economic."

So what happened to the tight-fisted Harper?

Well, sticking to the script isn't something conservative politicians are known for these days, Desai said.

"There are some deep contradictions in right-wing policies around the world," she said. "They are particularly clearly manifest in Canada."

She said that with Canada's economy slowing down and an election approaching, it's likely that the Conservatives will say or do whatever they must to maintain their grip on power.

Back in 1991, Harper agreed that government funds were being used for the same purpose.

"It is easy to imagine a government with a 35 per cent popularity rating tempted to improve its reelection chances with a fiscal expansion," he wrote. "It is also easy to imagine that this temptation would increase as popularity slipped to 30 per cent."

The latest polls put the Conservative Party of Canada at 29.4 per cent of support.