A small sign affixed beneath the window of Isabella Mori's tiny 186 square foot home speaks to its popularity in her Metro Vancouver trailer park. It reads: "Taking photos is fine but only from the sidewalk please."

You can understand Mori's shyness. When your living room moonlights as your front hall, kitchen, bedroom and office, having looky-loos peeking in the windows can be disconcerting.

But compared to her previous living situations over the past 28 years, Mori's miniature house is her dream home.

Before moving in, back in March, Mori "lived in a succession of old character houses that were either renovicted or under threat of," she laughed.

"It was basically what [friends and I] could afford as students or just as working people in Vancouver. There's not a whole lot of options: you can either live in a shitty basement suite or progressively farther and farther from downtown as time has gone by. Or you live in a shack and hope they don't tear it down."

Four years ago Mori discovered tiny homes online and fell in love, saving up enough money from living in teardowns to order a custom designed and built tiny home for $39,000 -- the cost of a down payment on some of the city's cheaper condos.

Today she pays a little over 30 per cent of her $36,000 a year salary in RV park rent, insurance and utilities after taxes. That's more than what the Canada Mortgage and Housing Corporation considers affordable, but Mori isn't concerned about being priced or renovicted out of her new home.*

"I have a feeling [my] wage is going to stagnate over the next seven or eight years because of some of the contract things that are happening," said Mori who works for Portland Hotel Society in the Downtown Eastside. "So I don't anticipate getting any more money than I have right now.'"

Loosely defined as self-contained houses with 100 to 500 sq. ft. of floor space, the growing category of "tiny" homes are energy efficient, minimalist, and perhaps most desirable in B.C.'s hot housing market, cheap. According to The Tiny Life, an American-based resource website for everything tiny home, the average tiny house costs US$23,000 to build -- a shade under C$30,000. The average American single-family home costs US$272,000 -- C$353,000.

(If only, I hear some Vancouverites say. The median home price here, including both condominiums and single-family dwellings, is $720,000.)

Faced with the unattainable price of conventional home ownership, Mori is one of a rising number of British Columbians choosing to go small. Plans for tiny home villages -- groupings of tiny homes on one piece of land, sometimes with a main standard-size house for socializing and laundry facilities -- have already been announced in Victoria and Terrace in response to unaffordable housing and homelessness.

Despite the RV Park's beautiful view of the mountains and ocean, and onsite pool and hot tub, Mori wanted to set up her tiny home closer to work in Vancouver.

But the city does not zone for tiny homes, and isn't convinced that units under 400 square feet are livable, unless they're social housing -- which must have a minimum of 320 sq. ft. per unit -- or rental units in the Downtown Eastside, with a 250 sq. ft. per-unit minimum.

"From our perspective," said Abi Bond, director of housing policy and projects for the City of Vancouver, "we have to weigh out things like using land efficiently." In the city's view, that supports a preference for laneway homes with multiple tenants, or basement suites that take up less land than multiple tiny homes.

Almost a year and a half after opening their tiny home building business, the Fernie, B.C.-based Hummingbird Homes will open the first phase of its first tiny home "village" on Aug. 1 in Terrace.

Hummingbird is turning 31 acres of Terrace property into a 30-home village with one standard-sized house for socializing, recreation and laundry facilities.

"There's obviously demand for lower price accommodation" in Terrace, said Blake, where the cost of a detached house can set you back half a million dollars or more.

Village tenants can either bring in their own tiny home for a short or long-term stay, or have Hummingbird build one for them. Units come with or without wheels for taking the house on the road, making moving much easier.

Living there long-term is the cheapest option: "$750 per month including most of the utilities, rather than paying $1,500-$2,000 for a one-bedroom [apartment]," said Blake.

Victoria city council sees "micro-homes," as it prefers to call them, as a temporary solution to house people for whom renting -- let alone owning -- a home feels like an impossible dream.

In early June, council voted in favour of creating a micro-home village in downtown Victoria to house approximately 35 people. It's part of a multi-pronged approach to addressing the needs of 350 chronically street-homeless people; other elements are more shelter beds, regulated camping in some public parks, and a push for more affordable permanent housing in the capital city.

The tent city and micro-home village are "band-aid solutions," admitted Victoria councillor Jeremy Loveday, "and we're bleeding, so we need them now."

Micro-Housing Victoria Society has taken over finding a suitable space, public consultation on the project, and the initial organization of the village from the city. A new non-profit comprised of homeless and housed anti-poverty advocates, the society's membership overlaps with that of the grassroots Committee to End Homelessness, which encouraged the city to look at tiny homes in the first place.

The city will act as regulator and advisor to the society, and ensure municipal services such as fire, water, waste collection and sewer are provided.

"I've heard a lot of people who are excited that the city is taking the issue of homelessness seriously, and looking at new and innovative solutions," said Loveday. Some people who are concerned about the proximity of the village to their own homes may be confusing the project with the tent city, he thinks.

There's also a fear that putting homeless people in tiny houses off by themselves will further marginalize people already on society's fringes. Loveday said the city hopes to avoid that by working with people living on the streets to develop a community on their terms, and eventually passing responsibility for the day-to-day operations of the village over to its members, with the help of an external board.

"I think if done properly with the people who are going to live there helping to set the rules and expectations of their community that they're helping to build, I think that won't cause ghettoization," he said.

Livability: a matter of opinion

But Vancouver isn't interested in micro homes to fight homelessness or as an alternative to a hot housing market. The tiniest unit it allows outside of social housing or Downtown Eastside rentals is 400 sq. ft.

The size restriction is "for livability reasons, primarily," said Bond. Laneway housing and basement suites are preferred because they allow for denser occupancy without increasing land use.

The city is considering allowing developers to include 250 sq. ft so-called micro-suites in new rental or condo developments, in exchange for also including more family-sized two and three-bedroom units. But Bond doesn't see similar benefits with stand-alone tiny homes.

"Putting tiny homes on a site is unlikely to be an optimal use of that land," she said.

Aprodicio Laquian disagrees with minimum size restrictions. A professor emeritus at the University of British Columbia's Centre for Human Settlements, Laquian specialized in affordable housing and urban development in both east Asian countries and Vancouver's inner city. From his experience in both regions, "livability" is an artificial measurement. 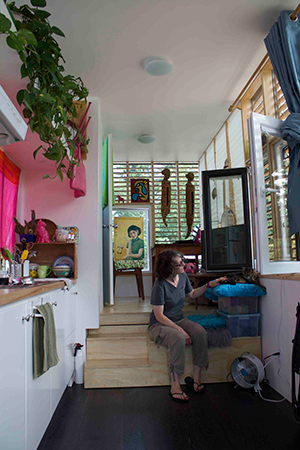 "The key is how much square footage do you really need to have a comfortable style?" he said. "I think for as long as there is an artificial limit on the square footage, Vancouver will continue to have very unaffordable housing."

Design is the key feature to making smaller spaces comfortable, he adds. Close to 70 per cent of public rental housing in Hong Kong is on a sub-micro scale: between 65 and 132 sq. ft. Some of the units Laquian has seen include features similar to tiny homes, like a Murphy bed that stows away during the day or rooms that serve as living, sleeping and eating quarters.

But when the popular "Vancouver Special" detached house in the Lower Mainland gives a person 1,500 to 2,700 sq. ft. to stretch out in, space can seem like a commodity increasingly reserved for the well-to-do.

No one Tyee Solutions Society spoke to, not even Mori, endorsed tiny homes or micro villages as the solution to affordable housing. While a few families have adopted tiny living, she said, Mori wouldn't recommend it for parents with kids, "unless bylaws were to change and you could build one that's 35 ft. long." Tiny homes are usually about 20 ft. in length.

Still, Mori is frustrated that municipalities are making the decision that tiny houses aren't livable, rather than leave that to residents. In house-hungry Vancouver, she points out, even the cost to rent in a city-favoured laneway house is out of reach for many.

"I think with all the talk about densification, affordability and green-ness, that's incredibly hypocritical to not at least allow people the option of [living in a tiny home] if they so choose," said Mori.

More Vancouverites may soon begin to get that option -- but in the land-strapped city it's a lot more likely to come as a pint-sized condo than a twee cabin in a micro-village.

*Story corrected July 22 at 2 p.m. An original version of this story incorrectly stated how much Mori pays in RV park rent.