Metro Vancouverites overwhelmingly rejected their own mayors council's plan to boost transit and transportation funding by $7.5 billion with a half-per cent sales tax. 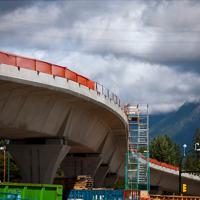 Was Transit Referendum Designed to Fail?

The results of the non-binding regional vote on whether to boost transportation funding in the Metro Vancouver region arrived this morning and saw 62 per cent of voters vote no, and a region-wide turnout of 51 per cent.

While the Yes side lined up popular mayors alongside big names in the business community, unions, and environmental groups, the No side had from the beginning polled as very popular particularly in suburban areas.

Highest among No voters were Langley, Maple Ridge and Richmond. Only three, low-population municipalities actually voted Yes -- Bowen Island, Belcarra and Electoral District A, which includes UBC, and parts of the North Shore.

Today's vote even saw Vancouverites -- who would have significantly benefited from new transit infrastructure under the plan -- reject the proposal, voting only 49 per cent in support.

Canadian Taxpayer Federation spokesman Jordan Bateman, who headed the No TransLink Tax side, declared the results a "tremendous victory for taxpayers" and called his insurgent campaign as an "underdog" in a pitched fight against a plan to increase transit service, replace an ageing bridge and boost road infrastructure.

"Our campaign didn't have millions of taxpayer dollars or fancy CEOs committing their groups to our cause," Bateman said in a statement. "We had everyday taxpayers who simply believe TransLink wastes too much of our money to be trusted with any more of it. This is a win for all of us."

Throughout the campaign, the Mayors' Council behind the proposal insisted that provincially created TransLink, the region's transit authority, was not the focus of the plebiscite. The Yes side spent nearly $6 million wooing voters.

For prominent Yes side proponent the Canadian Office and Professional Employees Union 378 -- which represents roughly 650 employees at TransLink and Coast Mountain Bus Company -- that message was understandably never accepted by voters.

"People are absolutely angry at the lack of leadership the provincial government has shown on local transportation," the union's secretary-treasurer Lori Mayhew said in a phone interview. "They were sending that message to TransLink through this vote.

"The whole creation of TransLink has been a mess since the beginning. People are just angry there appears to be little if any accountability to the voters on this."

Translink 'will not be able to expand': CEO

The province announced it would hold a press conference this afternoon reacting to the results, though Premier Christy Clark had early in the campaign stated she supported a Yes vote.

TransLink's interim CEO, Doug Allen, told CBC that he respects the results but warned: "We must recognize however, that it will not be easy because we will not be able to expand. Our revenue base essentially will be flat or falling and we'll simply have to do a lot of things better in order to provide the kind of service we've been providing to date."

For Bateman, his campaign doesn't stop now despite being on the winning side -- and TransLink itself remains the target.

"It's time for the premier, minister, mayors and TransLink board to fix this money-wasting, poorly-run agency," he said. "TransLink has lost the public's confidence and now they have to listen to taxpayers and rebuild it properly."