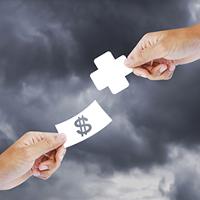 SFU Making Foreign Students Pay Too Much for Health Insurance?

Farnworth said outside the legislature that his party has many questions about what happened. "They were fined $150,000. It was all kept very quiet, no policy holders were notified, and we find that a little troubling."

Manulife Financial Corp., the Manufacturers Life Insurance Co. and Benesure Canada Inc. agreed in February 2014 to pay the fine plus $31,152 to cover the cost of the investigation, according to the settlement agreement signed by representatives of the companies and B.C.'s superintendent of financial institutions.

The matter relates to the Mortgage Protection Plan that the companies sold as mortgage insurance through mortgage brokers. Home buyers sometimes purchase such insurance to cover the cost of their mortgage in case death prevents them from paying.

The settlement agreement does not include details of what happened, but shows that the superintendent observed contraventions of four sections of the Financial Institutions Act, including rules that require financial institutions to clearly identify themselves on documents relating to their business, such as marketing materials, as well as rules that prohibit the operation of an unauthorized insurance business and the payment of commissions to unlicensed agents.

It's unclear how many consumers were affected by the contraventions.

He asked whether the government had notified the RCMP, the people who bought mortgage insurance from the companies, or the insurance industry regulators in other provinces where the companies do business.

Finance Minister Mike de Jong responded to all three questions by saying he was not in position to answer, but would take the questions on notice and respond in the legislature when he could. "Thanks to the member who has raised, I think, a serious matter," he said.

In an emailed statement, a spokesperson noted that the consent order said that "after investigation, [the superintendent] is not aware of any harm to policyholders." The spokesperson wrote: "Manulife confirms that insurance coverage issued by Manulife under the MPP program continues to be valid and in effect."*

The NDP provided reporters a copy of an agreement related to the settlement between the government and the three companies that states Benesure commits "not to conduct unauthorized insurance business in British Columbia," and that Manulife and Manufacturers will make sure its products are clearly explained and "are not marketed so as to create the misunderstanding that they are insurance products."

According to the agreement, the companies were to replace their marketing materials so it was clear who the actual insurer would be, what someone would need to do if they had a claim, and who to contact if they had questions. Training for people selling the product was to include "the fact that the insurance purchase is optional and that must be disclosed to consumers."

Manulife and Benesure group's Mortgage Protection Plan also led to a notice of civil claim filed in February 2013 in the Supreme Court of British Columbia. The claim names the same three companies, plus five other defendants involved in the mortgage and insurance business.

Farnworth said the plaintiffs, Francoise Leonard and Leanne Ranniger, are seeking to have the case certified as a class action.

Among other things, the suit alleges that "for the [Mortgage Protection Plan] product, Manulife and the Benesure group employed a deceptive standard form document which was represented as being a document by which one could waive purchase of the products, but in fact is worded in such a way that made waiver of purchase impossible."

"As a result," it said, "class members were deceived into applying for the products."

Another claim in the suit is that Leonard was sold a Mortgage Protection Plan insurance policy that was very narrow, covering only a death caused by an accident, but not a death caused by sickness, illness or disease.

The notice summarizes the defendants' behaviour as including "the deceptive drafting and dissemination of the [Mortgage Protection Plan] waiver, knowingly setting up and structuring an insurance business designed to circumvent government regulation, obtaining private information they knew they were not entitled to possess, and impersonating mortgage brokers."

None of the allegations have been proven in court.

Asked who may have been harmed, Farnworth said, "People who bought policies in good faith, and I think that's one of the issues that will be explored in the weeks ahead."

He added, "When you buy a policy, you expect it to be sold according to the laws and regulations that exist here in British Columbia, and when that's not the case, that should be concerning to you."