When Mike Soron was about seven or eight years old, he visited an education centre known as the "Energeum" in his hometown of Calgary. It had a section at the front where you could put on gloves, play with bitumen from the oilsands, and learn how the tarry substance was going to make Alberta rich. But at the rear, a screening of The Lorax seemed to warn of dire ecological consequences. Soron didn't know what to think. "Looking back," he said, "I was trying to wrestle with the contradiction." 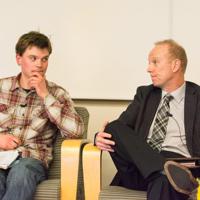 Soron kept wrestling with it. In his twenties he studied political science at the University of Calgary, and in 2009 he moved to Vancouver to earn a master's in urban studies from Simon Fraser University. As friends and family back home pursued lucrative careers in oil and gas, he became executive director of the non-profit Sustainable SFU and made fighting climate change his top priority. Then, in summer 2012, he read a Rolling Stone essay by the climate activist Bill McKibben that affected him deeply.

In it, McKibben described "Global Warming's Terrifying New Math," and urged university students like Soron to lead an international movement to divest their schools' endowments from companies like Shell and Exxon Mobil. To Soron, the essay was "very exciting." Several months later, after stumbling across a Canadian Centre for Policy Alternatives report by Marc Lee that put McKibben's math into a more local context, he decided to help set up a divestment campaign at SFU.

Over 400 campuses now have such campaigns, 27 of them in Canada. Last week, University of British Columbia faculty voted in support of the youth-led movement. Its rapid growth owes much to young people's unease about climate change. Yet Soron is among those who think it also represents a generational shift in values. "There's this false idea that where you put your money doesn't have anything to do with your morals," he said. "That's something young people have a problem with."

The absurdity of separating money and morals became clear to Soron in June 2013, when floodwaters surged into Canada's oil and gas heartland. Via text message, Facebook and Twitter, Soron watched helplessly as friends and family in Calgary and across southern Alberta coped with a disaster that displaced over 100,000 people. "Seeing my hometown so damaged by extreme weather and poor planning," he later wrote, "I realized I needed to step up and work for safer communities."

One lesson Soron took away was that a community's financial decisions should not work against the well-being of the people who live there. Which is why he spoke before Vancouver council in Oct. 2013. The world's "Greenest City" was debating whether it should divest from its municipal pension fund nearly $400 million invested in fossil fuels. To Soron, it was a no-brainer. "Young people are determined to protect their future," he argued. "They demand that same determination of their leaders."

Across the world, young people were making similar demands. A 2013 report from the University of Oxford concluded that fossil fuel divestment was growing quicker than any earlier divestment movement, while one executive described it as "one of the fastest-moving debates I think I've seen in my 30 years in markets." Yet many university leaders were skeptical. Harvard president Drew Faust argued the school's $36-billion endowment "is a resource, not an instrument to impel social or political change."

Such words were evidence to Soron of a growing generation gap. "The idea that you can be neutral while wrecking the planet is totally bizarre," he said. "Younger people have an easier time thinking about the impact of their actions." Some fossil fuel firms are taking notice of that gap. David Crane, CEO of the utility NRG, has said he doesn't "relish the idea that year after year we're going to be graduating a couple million kids from college... with a distaste or disdain for companies like mine."

Divestment isn't a new idea. In the 1980s, universities used their endowments to protest tobacco and apartheid. But the latest iteration came in 2004, when five U.S. student activists formed the Responsible Endowments Coalition to compel colleges to consider the social and environmental impacts of their investments. "We helped broaden young people's understanding of how they could engage... with major things happening in the world," REC co-founder Morgan Simon told The Tyee.

With the coalition's support, young people at Swarthmore College launched a campaign in Oct. 2011 to divest their school from fossil fuels. Likeminded efforts went national after McKibben calculated "Global Warming's Terrifying New Math" in his Rolling Stone essay and toured the U.S. urging students to take action. But by then Simon had left REC to engage with the other side of the divestment equation: how can financial markets be used to create a more just and sustainable world?

As founder of such "impact investing" networks as Toniic and Transform Finance, Simon said she's strived to create "effective commerce without exploitation." Many other young investors share her goals. "Millennials consider social responsibility to be a major factor in evaluating investments," a 2013 report from ImpactAssets reads, "which is powerfully different from the bifurcated approach of previous generations who perceived doing well and doing good as separate activities."

Wall Street is well aware of this shift. As The Tyee reported from New York last year, Morgan Stanley will oversee $10 billion over five years in assets addressing such global issues as climate change and poverty. Simon is wary of the greenwashing and exploitation that can occur when major financial institutions attempt to become more socially conscious. Yet she's also excited about the prospect of morals and finance becoming so aligned "that at some point you could just call it 'investing.'"

That's a radical proposition to most mainstream investors. But not to people like UBC climate activist Alex Hemingway. In fall 2013 he helped gather the signatures needed to get divestment onto the student elections ballot, and then spoke to anywhere between 1,500 and 2,000 students, he estimated, about the tension between UBC's green commitments and the $100 million of its endowment supporting oil firms like Suncor. "We can't live up to those principles of sustainability," Hemingway said, "if we don't address the school's investments."

It proved to be a powerful message. In Jan. 2014, 77 per cent of students voted to divest UBC from fossil fuels. And last week, 62 per cent of the school's faculty cast ballots to support them. "It's time for UBC to take some action," said forestry professor George Hoberg. How the school's Board of Governors choose to react to those votes is uncertain. But the Vancouver Sun's Pete McMartin argued that "it will be students, not the board members, who will live with the consequences of their decision."

In deciding whether to divest, UBC's leadership has many factors to consider. The Pacific Institute for Climate Solutions estimated that if the school fully divested from fossil fuels while reinvesting in clean energy, "it would reduce [UBC's] overall exposure to GHG emissions by around three per cent." Former Quebec premier Jean Charest has added his voice to those elders who think "decisions for university endowments must be based on one thing: which investments will bring the best financial returns."

For young climate activists like Soron and Hemingway, such analyses overlook the divestment movement's broader aim: which is to remake the value structure of capitalism. No less than the Swiss financial giant UBS thinks such efforts should not be ignored. "Many of those engaged in [divestment] are the consumers, voters and leaders of the next several decades," it argued last September. "Time, youthful energy and stamina are on the side of the fossil fuel divestment campaign."