During a recent University of Victoria forum on fossil fuel divestment, Steve Douglas, Investment Relations VP from Suncor, argued that the fight against climate change requires teamwork. He encouraged his company's critics, including Crystal Lameman from the Beaver Lake Cree Nation, to learn from the aerodynamic riding formations used by Tour de France teams: that through teamwork, we can ride a slipstream to a "carbon-lite" future. Stephen Hume from the Vancouver Sun agreed, poetically noting how we are all in the same canoe, and need to begin paddling in unison to outpace disaster. For both Douglas and Hume, the fossil fuel divestment campaign is too divisive, too polarizing. 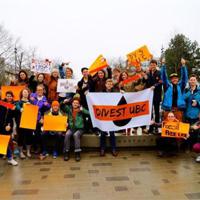 Why Divestment Warriors Should Diversify Their Strategy

Douglas and Hume's calls for teamwork are based on a fantastical view of contemporary politics, one where the different players can find common ground through earnest dialogue. We wish this vision of politics were true, but it is not. The great benefit of the fossil fuel divestment movement is that it is reality-based; it reflects the profound asymmetries of power that shape climate politics in Canada.

Not only is Suncor one of the top five political lobbyists in Ottawa, it is also one of the largest members of the Canadian Association of Petroleum Producers (CAPP). CAPP has engaged in direct political lobbying against strong climate policy, as Access to Information request show. CAPP was at the centre of the 2012 omnibus bills that overhauled and eliminated some of the country's most significant environmental laws. Between 2008-2012, CAPP met with the Canadian government 536 times, whereas Canada's largest citizen climate coalition, the Climate Action Network, had six meetings.

We may all be in the same canoe, but oil companies like Suncor have huge paddles that are propelling us towards the precipice of a raging waterfall. Until we name and challenge these power differentials, we won't create the climate policy we need. This is the primary function of the fossil fuel divestment movement. The strategy is to compel culturally and morally powerful institutions like churches, universities, and charitable foundations to publicly remove their investments from an industry whose self-interest threatens the long-term livability of our planet.

Let's connect some dots. The University of Victoria owns $4 million in Suncor shares. UVic also owns $20 million worth of fossil fuel companies, which like Suncor, are members of CAPP. In other words, UVic owns a $20 million stake in companies that belong to an industry group that directly advocates against strong carbon policy.

A common refrain from university administrators is that divestment is not aligned with their academic mission; that it is too political. We can only respond with our mouths wide open in wonder. UVic has already taken sides by owning shares in companies that threaten the rights of future generations by obstructing strong climate policy. Fossil fuel divestment reflects a division that already exists: multiple generations of human beings yearning for a bright future, up against an oil industry that wields its power to stall desperately needed government action.

Our collective challenge is significant. In 2012, the International Energy Agency released a report estimating that two-thirds of known fossil fuel reserves need to stay in the ground if we are to avoid catastrophic climate change. A recent paper in Nature has specified which reserves need to remain untouched. Unsurprisingly, the overwhelming majority of tarsands reserves are unburnable. And yet according to Suncor's 2013 annual report, "the absolute GHG emissions of our company will continue to rise as we pursue a prudent and planned growth strategy." Intensive lobbying efforts will be integral to Suncor's plans for growth since they contradict the biophysical requirements for climatic stability.

Yes, we as consumers also need to change our habits, but it's not regular Canadians who lobby our government to slow climate action. The oil industry has already drawn lines in the sand. The divestment movement simply points those lines out, and encourages institutions with moral courage to step onto the right side of the fight for a livable future.

Last week, two UBC researchers and the Pacific Institute for Climate Solutions released a report arguing that divestment alone is incapable of financing a green economy transition. Yet by focusing on the movement's immediate financial impacts, the report misses the point. The divestment movement's primary goal is to challenge the social license to operate oil companies enjoy, making it harder for them to successfully lobby against needed government action.

This threat is perfectly clear to oil industry analysts. As Geoffrey Morgan, managing editor of Alberta Oil Magazine, recently wrote about the movement: "Energy executives ignore the [divestment] campaign at their own peril; even though [divestment] targets their companies' stock price, its real intention is to erode the hydrocarbon industry's social license to operate."

Investments are not neutral. Institutional investors like UVic, who hold stock in the fossil fuel industry, have chosen sides. But they still have the opportunity to help right the canoe by revoking their support for the obstructionists who would endanger us all to save themselves.