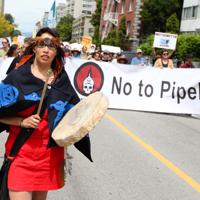 The Eagle Spirit Energy project, which positions itself as a less risky alternative to Enbridge's Northern Gateway, first set out to secure "social license" for a high-volume energy corridor through northern B.C. in September 2012. With financial backing from the Aquilini Group, president and chairperson Calvin Helin said his company consulted with First Nations and is in the process of designing a proposal that meets those terms.

"We learned First Nations do not want bitumen through the province, they do not want Kitimat as a port -- it's probably the worst place, they repeatedly told us -- they want a world-class environmental model, and they want fair reward for the risks they're taking," said Helin.

Two representatives from the Burns Lake Indian Band in Ts'il Kaz Koh territory and two hereditary chiefs from Gitxsan territories announced support for the project on Wednesday morning. They join Stellat'en First Nation, which announced its public support last year. "First Nations that came out and signed a declaration today wanted to demonstrate they're open for business when standards are met," Helin said on Wednesday.

While Eagle Spirit's "consult first, design later" approach has been observed with interest by some First Nations, two large aboriginal alliances have come out against the project. The Yinka Dene Alliance and Coastal First Nations responded to the press event by affirming their members still oppose high-volume pipelines through their land and waterways.

"Literally no First Nation on the coast is in favour of Eagle Spirit," said Art Sterritt, executive director of Coastal First Nations. "It's a bit misleading for Eagle Spirit to hold a press conference in Calgary and announce things have changed in British Columbia, because they haven't."

Yinka Dene Alliance spokesperson Geraldine Thomas-Flurer said the six member nations have "not changed our position on oil transportation through our lands and waters."

"I have heard you and David Negrin from the Aquilini Group state that your proposed pipeline will not proceed through a First Nation's lands unless you had consent from that First Nation," Chief Sam wrote. "Nak'azdli Band Council and our people will not give you the consent that you are seeking."

Despite vocal opposition, Helin said the Eagle Spirit project has secured agreements with partners along 80 per cent of his company's route. "Art [Sterritt] doesn't speak for all of the North Coast," Helin said of the project's silent supporters. "All I can say is we have non-disclosure agreements and I can't comment."

Many details about the pipeline have not been made public and could remain sealed away in non-disclosure agreements for months or years to come. Without an official price tag, route, or refinery and port location, experts have yet to weigh in on the project's feasibility.

"It's a very speculative project," said Des Nobels, a commercial fisherman and environmental campaigner for T. Bucks Suzuki Foundation. "In terms of the end route, yes it's a safer approach than many of the others being proposed, but I am loath to say one is better than the other."

One First Nations opponent of the Enbridge project attended the Eagle Spirit press conference, but did not sign the declaration of support. Chief Martin Louie of the Nadleh Wut'en First Nation, a member of the Yinka Dene Alliance, said that First Nations-led projects like Eagle Spirit have earned his careful consideration, but not his support.

"I'm not going to agree to anything until I've done due diligence," Chief Louie said.

With oil-by-rail ramping up across the province, Louie said he is in conversation with other aboriginal leaders to create a unified way to address development. "We have to come up with a plan," he added. "We cannot just say no and not have a plan for something else to happen."

Sterritt said Eagle Spirit's consultations may have piqued the interest of leaders like Louie, but the project ultimately doesn't deliver acceptable terms. "They [Eagle Spirit] got through a few more doors than Enbridge did, but never got any more support than Enbridge."

Helin said Eagle Spirit is in the process of finalizing several agreements, and will be announcing new information within the next couple months.